Posted in: Disc Reviews by Gino Sassani on December 22nd, 2018 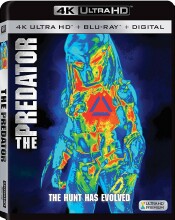 In 1987 Predator became somewhat of a milestone film for many reasons. The movie would anchor a franchise, thanks mostly to a wonderfully original Stan Winston creature design and the performance of Kevin Peter Hall under the suit. Both Winston and Hall have since passed, but the alien hunter that they created together is still going strong. The film also featured two stars who would later go on to become governors of their states. Arnold Schwarzenegger and Jessie Ventura made their mark in politics. The film also featured Rocky’s Carl Weathers. It also featured Shane Black in a small role that might not have contributed to the blossoming franchise then, but he has made his own impact by writing and directing the latest installment of that franchise The Predator.

The movie opens with great promise, showcasing the great strides in f/x technology since the first film. We witness a space battle between two ships and a glorious crash landing on Earth. The first group to investigate is almost totally wiped out. Army Ranger Quinn McKenna (Holbrook) not only survives, but he takes out a creature and makes off with some of its tech. He ships the helmet and armband home to get it past the government covert scientific team led by Will Traeger (Brown), who knows exactly what landed and doesn’t care who he has to kill to get to his creature. It turns out it was a big mistake to send the gear home, where it is intercepted by his autistic son, Rory (Tremblay) who decides to try the stuff out. It’s Halloween (of course it is), and it’s the perfect chance to hide behind a mask, because he gets bullied by the local boys because of his condition. Yeah, he gets some payback, but a new bigger and badder predator is tracking the equipment, and Rory’s in a lot of danger. Meanwhile Quinn is labeled crazy to keep a lid on his story and teams up with a unit of crazies who band together to protect Rory and kick some predator behind.

The film is not a remake or reboot. It takes place in the same timeline as at least the first two films, both of which are referenced in this film. One of the government scientists is named Keyes, and is played by Jake Busey, who is the son of Gary Busey, who played a government operative named Keyes in the second film, who was also tracking down a predator. There are plenty of other nice little Easter eggs to be found here that pay homage to the first two films. Technology has also allowed the film to feature more detailed close-ups of the creatures, which also becomes a bit of a liability for the film. It’s a great design, and I thought I could never get enough of it, but Shane Black decidedly overexposes the creature in this film. We see him way too often, and it does lose some of its ability to awe because of the temptation to show too much.

There is no question this is a Shane Black film, and that also is both a good and a bad thing. Quinn is a little too much like Riggs from Lethal Weapon, another Shane Black script. I like a little comic relief, but Black has a tendency to rewrite his favorite characters. Black also infuses a ton of humor in his films, but he once again goes too far here. The Looney Unit is actually a great construct, and the cast of characters provides great heart and humor to the film, but Black just can’t stop there. He fills the film with so much slapstick that this movie ends up spending too much time in crazy town. Black also goes for the hard R-rating here. This is absolutely the goriest Predator film, and he drops so many F-bombs that I kept waiting for Samuel Jackson to appear out of nowhere. His instincts are good, and it’s obvious Black is a fan, but it doesn’t quite work when we’re laughing our butts off and then there’s a super-serious gore moment. Don’t even get me started on the predator dogs. They are absolutely the Jar Jar moment in the film. Shane does add some nice new mythology to who these creatures are and fills in a lot of the blanks about what motivates them.

Black dips into his own toolbox too often. Of course there’s a kid at the center of the action, and the story actually does a nice job of tying the kid’s condition to the story. He’s not a throwaway character. Just a little predictable. Black also dips into his outing in Iron Man for a really bad reveal that attempts to set up an even crazier future for the franchise. As much as I loved aspects of this film, it is my sincere hope that they don’t let him anywhere near another one.

The timing might have been perfect, however. This is the kind of Predator film that surely won’t be allowed when Disney takes over the franchise next year. So I’m glad we got the experience now.

The cast is solid. Sterling K. Brown steals the show as the government operative, and he’s absolutely the most compelling character on the film. The loonies are pretty good, for the most part. This might end up being my favorite Thomas Jane performance. Olivia Munn falls rather flat as the scientist who is brought in to examine the creature and ends up on the run with Quinn and his gang when she becomes a lose end to Traeger. The performance is too much of a deadpan, and there is absolutely no life in her performance at all. She ends up a third wheel and an almost unnecessary burden. I like Munn a lot, but this her most disappointing performance to date.

The Predator is presented in an aspect ratio of 2.39:1. The ultra-high-definition 2160p  image is arrived at by an HEVC codec with an impressive average bitrate of 65-70 mbps. This film looks so much better than the original films. It’s a rather uncanny ultra high definition image presentation. The space battle that begins the film is spectacular, with the darkness of space with the bright pinpoints of stars and the amazing detail of the ships even in such total darkness. The night jungle brings us the deepest dark green colors I’ve seen in such a black environment. HDR makes a huge difference here. Remember that this film was mastered in 2K for the box office presentation, so this is an upconvert. The shimmering cloak of the creatures (and humans) is the best that effect has been done. Plenty of plasma weapons piercing through an inky darkness allows for HDR to truly demonstrate its love for this kind of material. The realistic stuff remains grounded in perfect reference colors. The creature design allows a lot of room for textures. This was a great design in 1987 and holds up to this kind of scrutiny quite well. The film is rich and actually feels more like a film than you often get from digital 2K. Fires and flares in the jungle deliver eerily perfect grading of color scale. These nuances are missing from the Blu-ray version of the film.

The Atmos track defaults to a very sweet 7.1 mix. This audio presentation grabs you from the first frame when the ships are battling and crashing. The surrounds are almost overloaded with lasers, wind shear, creaking metal, control panels, electrifying force fields, and then the combination with powerful subs to bring you an earthshaking crash. This film is absolutely a show-off film for your home theatre. The Oppo players are soon leaving the market, and this is the kind of experience some people will fail to take complete advantage of in the future. The old score suddenly reminds me of Mission Impossible, and it scores perfect percussion balance with everything else. Your subs will find plenty to talk about and to shake, rattle and roll throughout. Dialog always manages to punch through. There are a few short silent moments that stand out in the presentation. It gives your ears just enough time to get ready for the next sizzling battle. It’s like using water to clear your palate between wines during a tasting.

Deleted Scenes: (6:55) There are only four with a handy-dandy play-all option.

A Touch Of Black: (10:28) The feature starts with clips of Shane Black in the original film. Apparently he was asked to act in it in the hopes he’d work on the script. He didn’t, so they killed him off first. Cast and crew talk about their reactions to the early films. It turns into a Shane Black love-fest before delivering some nice behind-the-scenes footage and plenty of Black giving us his philosophy on both the franchise and this film.

Predator Evolution: (20:11) This one is all about the Predator itself. We start with clips from the earlier films and then get to see plenty of conceptual designs. The feature follows the process from concepts to creating the rubber pieces and animatronics that bring them to life.

The Takedown Team: (16:14) This feature profiles all of the main characters. The actors provide their own insights into each of the characters.

Predator Catch-Up: (9:09) This is a montage that delivers “short” versions of each of the first three films. There’s no narration or intrusion of any kind. It’s straight “reader’s Digest” movies here.

The final verdict has left me more conflicted than I’ve been about a film in years. There’s so much that I loved, and then there were too many times it was hard to restrain myself from a huge groan. It was certainly fun most of the time, and I’m glad to have seen it. I just don’t think it will hold up as well down the road. It ends up being something of a monster mash-up film that ends up being “some kind of interstellar cops and robbers”.

Gino Sassani is a member of the Southeastern Film Critic's Association (SEFCA). He is a film and television critic based in Tampa, Florida. He's also the Senior Editor here at Upcomingdiscs. Gino started reviewing films in the early 1990's as a segment of his local television show Focus. He's an award-winning recording artist for Omega Records. Gino is currently working on his 8th album Merchants & Mercenaries. Gino took over Upcomingdiscs Dec 1, 2008. He works out of a home theater he calls The Reel World. Favorite films: The Godfather, The Godfather Part II, The Body Snatcher (Val Lewton film with Karloff and Lugosi, not the pod people film), Unforgiven, Gladiator, The Lion King, Jaws, Son Of Frankenstein, The Good, The Bad And The Ugly, and Monsters, Inc.
Bumblebee 12 Days Of Christmas Giveaways