Posted in: No Huddle by Brent Lorentson on January 2nd, 2019 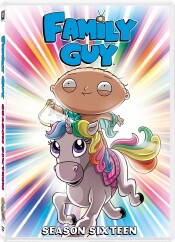 Family Guy has reached a level of impact upon the American pop culture where I believe the characters need little to no introduction.  Is there anyone really that doesn’t recognize Stewie? After all, he’s reached the status of icon and has even become a fixture of the Thanksgiving parade as one of the many floats.  Where The Flintstones, then later The Simpsons, were at one time the dominating animated family on the television tackling day to day struggles of the modern American (each in their own and unique way), Family Guy (love it or hate it) now seems to be the go-to animated family.

In this collection of 20 episodes, the creative force, Seth Macfarlane and his team continue to deliver the laughs along with their twisted moral messages.    In today’s culture it seems like it is harder and harder to be a comedian and manage to not offend anyone.  Considering how Family Guy has always been a show that seems to enjoy testing the boundaries on what is considered obscene while poking fun at pop culture, I’ve been curious how the show would fare.  Thankfully the show hasn’t seemed to pull its punches and manages to have jokes aimed at just about everyone, and by saying that I want to start off by discussing “The D in Apartment 23”.  In this episode we see Brian suffer the fallout after he makes a “racist” tweet. We’ve seen in the media how quickly a tweet can ruin careers, and in this episode  the show even dares to poke fun at how sensitive people have gotten.  This is one of those social commentaries where though it’s funny in its presentation, it is kind of a sad reflection of what we have become, where a joke can’t just be a joke anymore.  This is one of those episodes I wish everyone could sit down and watch and simply appreciate what the episode has to say, because frankly I’m a little concerned about the direction comedy may end up going, along with that notion of “freedom of speech”. On a lighter note on this episode, perhaps the highlight of the season was seeing Chris and Meg take on the students at their school in a fight scene that parodies the epic fight scene from the first Kingsmen film.   The episode “HTTPETE” piggy-backs on this message, where we see Peter attempt to become a Millennial, though this episode definitely doesn’t have as serious of a tone to it.

OK, enough serious talk; in “Switch the Flip” we see Brian and Stewie switch bodies. This goes even more nutty when all the members of the town of Quahog switch bodies.  This episode for me is way funnier than it should have been, but it literally was the episode to get the most laughs out of me.  Another of my favorite episodes is “Three Directors”, where we see three different perspectives of Peter getting fired from his job if the episode were to be directed by Quentin Tarantino, Wes Anderson, and Michael Bay.  This episode is simply absurd but pretty much nails it at the same time with the unique styles.

Unfortunately there are a few duds in this season. After all, there are 20 episodes; they can’t all be great.  The episode I had the biggest problem with is called “Through the Years”, where we see how the show could have been if it was done during the 50’s, 60’s and 70’s.  The concept is clever, but the delivery simply fell flat for me.  Then we have the episode “V is for Mystery”, where we see Stewie and Brian taking on the roles of Sherlock Holmes (Stewie) and Watson (Brian).  I really wanted to like this episode, but it just didn’t manage to deliver on its potential. At one point there is even a comment from one of the characters that they should have done a parody of Harry Potter instead, and I kind of agree with this.

At this point if you’re a fan of the show, this is something you’ll consider picking up on DVD or searching out on a streaming service.  This season definitely has a higher re-watch value for me, though I wouldn’t say this is one of my favorite seasons either.  Considering the amount of projects Seth MacFarlane has going, I’m impressed how the series continues to have steam going into a seventeenth season.  It may not be the greatest show on television, but it still manages to make me laugh while inserting a bit of social commentary from time to time, and that is something I’ll always be able to appreciate.

Brent Lorentson is a horror writer and film critic based out of Tampa, Florida. With a BA in Digital Film, he co-wrote and co-directed Scavenger Hunt. His short stories have appeared in various horror anthologies. In 2019 his short script Fertile Blood will be a part of the anthology horror film Slumber Party. He is currently working on his first novel A Dark and Secret Place set to be released in late 2019. Favorite Films: Taxi Driver, Fight Club, I Saw the Devil, The Wild Bunch, Dawn of the Dead, A Clockwork Orange, Pulp Fiction, Heathers, The Monster Squad, and High Fidelity.
12 Days Of Christmas Giveaways: Day 8 – Win Rescue Me: The Complete Series On Blu-ray From Mill Creek Entertainment 12 Days Of Christmas Giveaways: Day 9