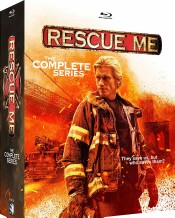 On The Eighth Day Of Christmas Mill Creek Entertainment Gives To You:

Rescue Me The Complete Series on Blu-ray. Our pals at Mill Creek Entertainment have been very generous this year with Holiday prizes for us to give away. This is one of the hottest Winter prizes you’re ever going to find. You get all 93 scorching episodes. All 7 seasons of the hit firefighter drama Rescue Me on Blu-ray. There are plenty of bonus features here. Now we know why Santa’s wearing that bright red suit.

Gino Sassani is a member of the Southeastern Film Critic's Association (SEFCA). He is a film and television critic based in Tampa, Florida. He's also the Senior Editor here at Upcomingdiscs. Gino started reviewing films in the early 1990's as a segment of his local television show Focus. He's an award-winning recording artist for Omega Records. Gino is currently working on his 8th album Merchants & Mercenaries. Gino took over Upcomingdiscs Dec 1, 2008. He works out of a home theater he calls The Reel World. Favorite films: The Godfather, The Godfather Part II, The Body Snatcher (Val Lewton film with Karloff and Lugosi, not the pod people film), Unforgiven, Gladiator, The Lion King, Jaws, Son Of Frankenstein, The Good, The Bad And The Ugly, and Monsters, Inc.
SEFCA (Southeastern Film Critics Association) Announces Their 2018 Film Awards Family Guy: Season 16