Posted in: No Huddle by Brent Lorentson on January 3rd, 2019 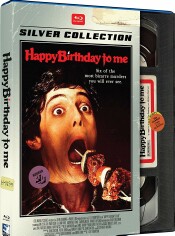 Though this wasn’t a film I remembered first seeing, the VHS box art is one I’ll never forget for how cheesy it was.  For those who don’t know, it had a man having a kebab impaled into his mouth.  While the cover art isn’t the most appealing, what got me interested was seeing that the film was directed by J. Lee Thompson, who has a fun and diverse body of work.  With films like The Guns of the Navarone, Conquest of the Planet of the Apes, Cape Fear (the one starring Gregory Peck and Robert Mitchum) and numerous others, for film lovers this should be enough to garner some interest to want to check out. Does the film hold up as an 80’s slasher, or should this be a title that should have remained shelved to collect dust?  It’s time to strap on those party hats and find out.

The film opens up innocently enough with a bunch of college friends hanging out in a bar and causing some mischief with the locals.  While the setup and dialog are nothing all that great, it’s the scene with them leaving the bar that got me hooked.  As the gang is exiting the bar, they see that a drawbridge is getting ready to raise its section to let a boat pass, so the students hop in their cars and motorcycles racing to see who will make it across or who will chicken out.  This of course freaks out Virginia (Melissa Sue Anderson), though as the film progresses, we see it’s for good reason.  This was a fun sequence, but what surprised me was that the film kept me entertained.

Having a seasoned director behind the camera for this film elevated the class and style of this film, at times even evoking a bit of Hitchcock and De Palma.  While the script is serviceable, it’s the direction that carries this film and keeps the viewer guessing.  As the students are being killed off one by one, just when you think you have this film figured out, it pulls some fun twists.

So what does any of this have to do with a birthday?  Well, Virginia is the birthday girl, and as her birthday is getting closer and closer, her friends all seem to be disappearing.  Now there is a side story going on where Virginia is recovering from the loss of her mother in a car accident where she also suffered from some brain damage.  I enjoyed how the question of her sanity is always lingering over the course of the film, and the performance Anderson gives is definitely better than the average performance we’re used to seeing in these kinds of films.

This brings me to the gore. While there are some “brutal” kills by today’s standards, the kills are a bit tame in the blood and gore department but still manage to make an impact.  I really don’t want to spoil much with this film, because for those of you who haven’t seen it and are even considering giving this film a shot, do it; you won’t regret it.  My only “major” complaint is when it comes to Virginia’s friends. Though they seem to have a decent chemistry together, some of the characters just didn’t seem to fit right in this group.  I know it’s the 80’s, and you have to have that one awkward guy; in this film it’s Alfred (Jack Blum). I like the guy, and everyone acknowledges that he’s creepy, but just how does he manage to fit in with this group?  I’m nitpicking, considering I know these characters are there to simply be nothing more than a potential victim or killer, but seeing him bond more with the group would have helped.

As for who makes it to Virginia’s birthday party, this is one of those films where you really can’t miss the last 15 minutes, because it will definitely leave an impression on you, and if you’re a fan of the genre, I think you’ll appreciate what this film delivers.

Brent Lorentson is a horror writer and film critic based out of Tampa, Florida. With a BA in Digital Film, he co-wrote and co-directed Scavenger Hunt. His short stories have appeared in various horror anthologies. In 2019 his short script Fertile Blood will be a part of the anthology horror film Slumber Party. He is currently working on his first novel A Dark and Secret Place set to be released in late 2019. Favorite Films: Taxi Driver, Fight Club, I Saw the Devil, The Wild Bunch, Dawn of the Dead, A Clockwork Orange, Pulp Fiction, Heathers, The Monster Squad, and High Fidelity.
12 Days Of Christmas Giveaways: Day 9 Journey to the South Pacific (UHD Blu-ray) (4K)