Posted in: Disc Reviews by Gino Sassani on January 3rd, 2019 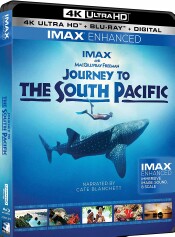 IMAX films are the perfect source material to show off the capabilities of the UHD Blu-ray/4K format. Most of the films we watch in theaters today have been shot around 2.8 K and mastered at just 2K. A 35mm film actually shot on film has a native resolution of 4K. The IMAX film format uses 65mm and 70mm film that increases its native resolution well beyond our 4K televisions and players. They are relatively short and have a ton of bandwidth to deliver the best possible image and audio. Shout Factory discovered this as soon as the format was launched, and Upcomingdiscs was there to check them out. Now there’s a new player in the IMAX UHD business, and it’s Mill Creek Entertainment. They get it, and so now you can expect a few of those gems coming your way from Mill Creek. The first one that I’ve had a chance to see is Journey To The South Pacific, and it’s sweet.

The film takes us to a local village in West Papua. We get some wonderful shots of the residents living their lives that depend so much on the sea. It’s the only real resource they have left. Because of overfishing and other obstacles, the big fish the natives so rely on are disappearing, and the health of the reef has been getting critical.

Enter young Jawi. He’s a spirited young man who has received a bit of an honor for the area. He has been invited to go to school on board the Kalabia. It was once a poaching ship that raped the waters of the area. Now it has been converted into a floating school where children spend two months learning about the sea and its reefs and visiting over a hundred of the small islands that dot the area’s topography. It’s going to be his first time away from home, and he’s both excited and a little apprehensive. The cameras follow him and his friends as they spend their last day together before Jawi leaves on the Kalabia.

Once aboard, we travel through the many places with the learning ship.

The ship visits a place where leatherback sea turtles swim thousands of miles to lay their eggs on the same beach on which they themselves were born. The footage is shot in a red light that is beyond the turtle’s ability to see, so they won’t be disturbed laying their eggs. Of course, that doesn’t stop the crew from moving their fins and the like. Finally the young turtles hatch and make their unlikely journey back to the safety of the see where only one in 10 will actually make it. They swim with whale sharks and study large groups of manta rays. The hope is that these students will be inspired by what they’ve experienced and be the discoverers of ways to save the sea and reefs.

The use of the IMAX cameras allows you to experience these locations and animals without getting your feet wet. There is a bit of an annoying trend here to add unnatural sound effects to what we see under water, and it’s the film’s greatest flaw. That silly aspect even when played to be somewhat realistic takes you out of the immersive nature of an IMAX experience.

Cate Blanchett does a fairly good job of narrating the piece, but she’s not alone. Director MacGillivray knows that these people have a unique story of their own, and he allows them to tell a great deal of their own story. That’s particularly true of young Jawi, who gives us his firsthand account and later reflections on what he has seen and learned. The island people are also quite musical. There are guitar players everywhere, and the film does a great job of allowing us to experience that important aspect of their culture. Jawi even writes and performs a little song of his own based on his experience with the sea. It might appear amusing that Jawi must be nudged to swim with the whale sharks. They frighten him, and with good reason. His father was fatally attacked by a predator shark. These, of course, are pretty harmless. No big teeth. They are filter feeders like actual whales.

Journey To The South Pacific is presented in an aspect ratio of 1.78:1. The ultra-high-definition 2160p image is arrived at by an HEVC codec with an impressive average bitrate of 85-90 mbps. Like most of these IMAX films the aspect ratio has been somewhat compromised for our widescreen television sets. They call it enhanced for widescreen televisions. Not sure I would use that term. Fortunately the aspect decision doesn’t appear to warp the image in any distracting fashion. These IMAX films are shot on 65mm and 70mm film and have a native resolution in excess of the 4K provided here. You get a stunningly realistic image of the colorful life that lives amid these reefs. I have had the chance to dive the reefs of the Florida Keys, and this is pretty much what you get. The only way it could have been more immersive is if the screen itself surrounded you in a VR cocoon. This is why IMAX is such a good candidate for UHD. The HDR colors bring out not only the vivid hues of the fish but the textures and sharp lines that define their look. There are aerial shots of the islands that offer a perfect vista of water and jungles. It’s a rather beautiful study in contrast. One that isn’t quite possible in just HD.

The Atmos track defaults to rather standard 7.1 presentation. The audio is there to bring us the narration and dialog. We can hear all of that clearly. The audio presentation throws us a bit of spice from time to time. We get a wider sound field during the music performances, and under the water you get that feeling of being surrounded by this alien environment.

The extras are on both the UHD and regular Blu-ray copies of the film. The UHD versions are only in HD.

Featurette: (4:37) Like all of these brief extras this is a promotional video likely played at the IMAX theaters as a coming attraction. There’s some behind-the-scenes footage and some of Blanchett recording her narration.

Webisodes: These are 3-4 minute promo features that give us a closer look at specific parts of the film like the whale sharks and sea turtles. We get an idea of how hard it is to get all of this large IMAX equipment in remote places.

IMAX on UHD is something I’ve been a huge advocate for. It’s a way to preserve these films on a format that allows the viewer to capture that experience as closely as is possible in their own home theatres. Greg MacGillivray is somewhat of a pioneer in this kind of filming and that experience allows him to take advantage of the format with his knowledge of how it all works. Millions of people live so far away from an ocean that they may never experience these kinds of things on their own. It’s like filling your home theatre with water and going on an undersea adventure. This are is considered one of the most ecologically diverse on the planet. “The Kalabia works continuously inspiring generations of children to care for the ocean.”

Gino Sassani is a member of the Southeastern Film Critic's Association (SEFCA). He is a film and television critic based in Tampa, Florida. He's also the Senior Editor here at Upcomingdiscs. Gino started reviewing films in the early 1990's as a segment of his local television show Focus. He's an award-winning recording artist for Omega Records. Gino is currently working on his 8th album Merchants & Mercenaries. Gino took over Upcomingdiscs Dec 1, 2008. He works out of a home theater he calls The Reel World. Favorite films: The Godfather, The Godfather Part II, The Body Snatcher (Val Lewton film with Karloff and Lugosi, not the pod people film), Unforgiven, Gladiator, The Lion King, Jaws, Son Of Frankenstein, The Good, The Bad And The Ugly, and Monsters, Inc.
Happy Birthday To Me – Retro VHS Look 12 Days Of Christmas: Day 10 – Win Starsky & Hutch: The Complete Series on DVD From Mill Creek Entertainment