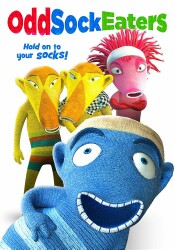 Ever have trouble finding two matching socks when trying to get ready in the morning? Ever had to go to school or work with mismatched socks? It is an uncanny phenomenon; all over the world people are losing socks, for them never to return. Well, according to this animated film, we now know who is the cause for the predicament. Apparently living among the human race are little creatures that feed off our socks for sustenance, but they adhere to a strict motto of never eating the full set. OK, obviously that is ridiculous, but it made for an intriguing story for The OddSockEaters, an animated movie based off a popular foreign book series. Looks like another great movie to get the Nalyce stamp of approval on.

The story follows a SockEater named Hugo who finds himself on his own for the first time in his life after his grandfather fades away (which is the kid-friendly way the movie addresses death). Before he goes, Hugo’s grandfather tells him of another family member that will look after him, his uncle, the BigBoss. Following a fallout with his father regarding their code of only taking what was necessary to survive, the BigBoss struck out on his own and has established himself as the leader of a group of SockEaters that pull heists on department stores all over the city. This crew isn’t interested in cash or jewelry, which they see as junk, but socks.

Hugo falls in with this crew and is taught their way of life, though he does question their habit of hoarding socks, given that it conflicts with the teachings of his grandfather. While trying to reconcile his new life, he is drawn into a conflict with a rival gang of SockEaters preaching the philosophy of taking both socks. (I know the whole sock thing is crazy, but I like to relate it to money.) All the while, they’re attempting to avoid notice and exposure by an evil genius determined to prove their existence to the world.

Under normal circumstances I can very easily determine whether a movie is going to entertain my daughter. When I got this movie, I was reasonably certain that she was not going to be interested in this tale. I had braced myself for a lot of protesting the moment we started watching. However, there was none. In fact, she didn’t say a word the whole time we were watching. For those of who you don’t know my child, it would normally take the act of a particular deity to get my daughter to be quiet. I mean, she is a regular chatterbox. Yet here we sat, and she was silent. She was too engrossed in the story to talk. I’ve never seen that before.

For me, I was not as I’m engrossed, but I’m sure that had more to do with me not being in the targeted demographic. Despite that, I enjoyed myself overall, the storyline developing at an easy-to-follow tempo and a unique and original perspective, especially the heist scene in the beginning for with the BigBoss and his crew. One thing I had trouble overlooking was why the human race was unable to see these creatures. It is eventually explained that the creatures were invisible to people with the exception of individuals known as Oddies, a rare breed of person. My issue with this is that this explanation came a little late for my taste. I spent the first half of the movie trying to theorize why people didn’t see these sock-looking creatures living in their cupboards. It would have played better if a title card explaining what a SockEater is was introduced at the start.

None of this deterred Nalyce, who is now interested in reading the book series as a bedtime story. So I am currently in the process of trying to find an English version of the books. For her, it was all about the design of the SockEaters, which I must admit I found interesting as well; Basically, a SockEater is a sock with human features with the foot hole acting as the mouth. The fact that these creatures survive on something that resembles them is a real headscratcher. Nalyce was most taken with the BigBoss, but not because of his character but more that he was her favorite color (which is purple). I myself was more taken with Hugo, as he serves as our window into this fantastical world and he challenges the status quo. Takes courage to stand up for what you think is right.

Originally released in the Czech Republic in 2016, the film was nominated for a Czech Lion Award for its sound and stage design. Redubbed for American audiences, I must give kudos as I had no idea that it existed in another format. This is a really good dub. Also in its favor, it sets up a great confrontation between two rival groups of sockeaters and puts a moral spin on how both groups choose to operate. It’s a bit ironic given that both parties are stealing socks to begin with, but there is no confusion as to which is the more honorable group.

A good family experience if you are looking for one likely to entertain even the most attention-challenged of kids. The OddSockEaters is a fun movie that I encourage all families to see.

Jeremy Butler is a film school graduate of the International Academy of Design and Technology. He is been writing for Upcomingdiscs since 2012; however, movies have played a big part of his life for much longer. Favorite genres include horror, science fiction/fantasy, and comedy. Favorite movies are V for Vendetta, Boondocks Saints, Kiss Kiss Bang Bang, and The Godfather.
A Beautiful Planet (UHD Blu-ray) (4K) Glass