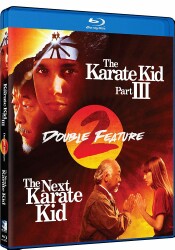 In the 1970’s Pat Morita was pretty much a staple of the American television landscape. It’s fair to say he often got work in a less politically correct era as a token Asian on situation comedies. He landed iconic recurring roles as Arnold, who owned the burger hangout in Happy Days, and Ah Chew, the target of Redd Foxx’s bigoted antics on Sanford And Son. His is a long career in the annals of 70’s television. While he did appear in a few feature films, none of these appearances had the lasting fame or adoration that he experienced as Mr. Miyagi in the Karate Kid franchise. The role would define him for the remainder of his days. When Karate Kid appeared in 1984, it delivered a modest return at the box office but found some enduring returns in the young home video market. It was enough to score a sequel in 1986 that would become the best moneymaker of the franchise’s original collection of four films. It pulled in enough scratch to warrant a third film, and that’s pretty much where it all went downhill faster than a speeding bullet which might have mercifully ended the movies on a high note.

Mill Creek released the first two films on Blu-ray some time ago, and it was pretty much expected that they would complete the set with the release of The Karate Kid Part III & The Next Karate Kid. Of course, they haven’t been given any kind of re-master or additional features. Both films reside on a single disc and got the attention to detail they both deserved…not much. So this is a cheap opportunity to have the collection for the purposes of a complete collection. And so a modest price gives you bragging rights. Perhaps the disc should come with one of those amusement park staples, a tee shirt that brags: “I survived The Karate Kid Part III and The Next Karate Kid“.

The film begins by reminding us of the events of the previous movie. Martin Kove played a karate master named Kreese. He trained through brutality and a bit of anger. Of course, Ralph Macchio’s Karate Kid, Daniel, ends up beating his prize student to win a coveted championship. The defeat was a public humiliation for Kreese, whose life began to spiral out of control in the aftermath. He lost his students and his dojo. He lives in disgrace. But all of that is about to change, and in a plot that was recently reworked for the latest Creed film, Kreese is looking to regain his dignity. He turns to an old Vietnam War comrade, Terry (Griffith), who is now the sleazy owner of a toxic waste disposal company. He agrees to bankroll Kreese in his attempt to take down Miyagi and Daniel. The problem is that Kreese is looking for revenge instead of redemption. They recruit Karate’s bad-boy up-and-comer, Mike Barnes (Kanan) to defeat Daniel for the championship.

The trouble is that Daniel and Miyagi aren’t interested in a return to karate competition. Daniel wants to find a way to repay his teacher and uses his college fund to buy a broken-down storefront to open a bonsai tree shop. As luck would have it, the storefront sits across the street from a small homemade pottery shop run by the attractive Jessica, played by Robyn Lively. But the romance is threatened by Mike Barnes and his goons bullying Daniel into entering the contest. The harassment becomes too much, and Daniel enters with the expected results.

The biggest problem with this movie is how much everyone appears to be phoning it all in. The series’ popularity comes from its heart and emotional journey. None of that happens here. The writing is exceptionally lazy. The villain, Terry, is reduced to a typical mustache-twirling villain, and there is just no depth to the character anywhere. His own motivations are paper-thin, and he has goons with names like Snake. They might as well have put them in hoodies with the word Henchman 1 and Henchman 2. We could have filmed the “lair” of the bad guys at an angle and called it 1960’s camp. On second thought, 1960’s camp was fun. There’s nothing fun about The Karate Kid Part III. The climax is an even worse joke. The henchmen literally surround the mat during the tournament hurling cliché taunts during the match. Really? No one took this film seriously, not the writer, the director, or the actors. Pat Morita appears literally in pain trying to portray this previously heartfelt character. Ralph Macchio destroyed his chances of continuing his career at a better pace by being difficult on the set. He was abusive and showed up late to the shoot. He would later blame the unfinished shooting script. It’s obvious this production was a mess from start to finish and ended the Macchio participation in the franchise. So in order to continue the series we needed….

“Why break boards? What boards do to you?”

With the departure of Ralph Macchio one film later than it should have happened, it was time for Mr. Miyagi to train a new kid. This time it would be a very young and as yet relatively unknown Hillary Swank as Julie Pierce. She is the niece of one of Miyagi’s friends. Julie’s parents died, and her aunt is caring for her. Of course she’s depressed and somewhat withdrawn. She goes to a school where gym teacher / ex military man Dugan leads a group of school storm troopers called the Elite Guard. They trot about the school in uniform looking for rule-breakers. Can’t find any? No problem; they’ll just plant a little evidence and lie. All of this encouraged by the leader Duganm played by Michael Ironside. Julie finds herself in the group’s crosshairs and gets suspended from school. All the while Mr. Miyagi has been living with her and trying to help her while her aunt is out of town.

The Elite Guard members aren’t all bad. Eric (Conrad) has feelings for Julie, and they end up putting him in conflict with his own team… and Dugan. Needless to say, Dugan doesn’t take kindly to anyone who goes against him or his team.

During the suspension, Miyagi takes Julie to spend some time at a monastery, where she ends up learning patience and a little grace. She teaches the monks a little as well, and she leaves ready to be trained to take on the squad goons. The monastery should have been a nice touch, but the heartfelt moments don’t really happen, and the monks themselves are played too much for laughs. Unfortunately, the training also misses any of the emotional heart that was what made the first two films what they were. The climax ends up being nothing more than a street brawl. While I found this film to be a little better than Part III, it’s obvious to me as it was to everyone else involved that the series had run out of steam and needed to stop.

Since then the franchise has been rebooted with mixed results. If you’re a completist who wants to have them all in your collection, this one won’t set you back too much. Anyway, it doesn’t mean you have to actually watch it, right? But if you do decide to pop his baby in your player? “Now the real pain begins.”

Gino Sassani is a member of the Southeastern Film Critic's Association (SEFCA). He is a film and television critic based in Tampa, Florida. He's also the Senior Editor here at Upcomingdiscs. Gino started reviewing films in the early 1990's as a segment of his local television show Focus. He's an award-winning recording artist for Omega Records. Gino is currently working on his 8th album Merchants & Mercenaries. Gino took over Upcomingdiscs Dec 1, 2008. He works out of a home theater he calls The Reel World. Favorite films: The Godfather, The Godfather Part II, The Body Snatcher (Val Lewton film with Karloff and Lugosi, not the pod people film), Unforgiven, Gladiator, The Lion King, Jaws, Son Of Frankenstein, The Good, The Bad And The Ugly, and Monsters, Inc.
Tuesday Round Up: January 22, 2019 First Man (UHD Blu-ray) (4K)