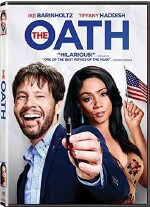 I was quite reluctant to attend the screening for The Oath. My reluctance wasn’t based on my willingness to see the film. People like us will go to any kind of a movie. I love films. My issue was the impression I received from the trailer. The film appears to be ripped from today’s political climate and quite possibly to be a close parody of the actual present political situation. No matter on what side of that issue I might personally happen to fall, we here at Upcomingdiscs try our best to keep our politics out of our work. It’s not fair to fellow writers for them to be brushed with any other writer’s ideals, and it’s simply unnecessary to create a hostile environment here for any of our readers or staff. So I approached the screening with the caveat that I might not actually review the film. When the studio agreed to those terms, I set out to experience The Oath. I’ll give you a little “inside baseball” into the movie review business. When a critic is invited to a press screening of a film, there is a bit of a contract strongly implied in that invitation. Attendance is an agreement to write and publish a review of the film that is reported back to the studio. No studio has ever even commented on the review’s content. Rest assured we are completely free to write whatever we want with the exception of revealing important spoiler information and agreeing to a specific embargo date (as sometimes we see a film weeks before they street). So that freedom to decide not to review was an important and rather unusual agreement to have, because I was not sure I was going to be willing to follow through. Fortunately, the trailer is a bit revealing, and The Oath isn’t a one-sided spoof at all. It can easily be enjoyed no matter what your individual politics happen to be.This film certainly touches on the political divide; however, it quite smartly removes itself a full step away from the current participants or personalities. The story pretty much focuses on one family that has gathered together for a holiday meal. Like most families, there are the usual tensions, and that includes differing ideas about the political situation. That landscape was impossible for them to avoid, because the President of the United States had just announced that he was issuing a “voluntary” Loyalty Oath, and the deadline for people to sign was fast approaching. And so our family naturally begins to discuss what they plan to do about it. Writer and director Ike Barinholtz stars as Chris. He has refused to sign the oath of loyalty to the President and has a pretty hostile opinion of anyone who has signed or is planning to sign it. Unfortunately for Chris, his parents and siblings who have all gathered at his home for the Thanksgiving dinner are more inclined to sign the oath, and some family members already have. The promise is that the oath is completely on a volunteer basis, but we soon learns what happens when you don’t sign and someone rats you out.

The political situation plays out on radio and television broadcasts that we see during the gathering. The film doesn’t really leave the setting of the house and actually has quite a nice stage-play vibe to the whole affair. The film consists almost entirely of the family dynamic, which will cut close to home not so much politically, but it’s the kind of dynamic most of us have experienced at larger family gatherings and meals. The personal baggage that these relationships carry is just as important in these interactions as the political story itself. Barinholtz does a great job of capturing that almost distinctly Americana experience.

The DVD comes with a couple of deleted scenes and a couple of short promo behind-the-scenes features.

The film begins to spiral a little out of control when a couple of government agents arrive on a tip that Chris was not planning on signing the Oath. I get where he’s going here, and it starts with just the right amount of tension, but quickly takes us out of the kind of believable reality we had experienced for most of the film. He begins to get silly almost to the point of slapstick, and it’s here that he lost me. I think that fimmakers don’t always trust an audience to have the patience to sit through a film that is basically people talking, but there have been excellent example of great films that managed to pull it off. Most are based on plays, and this could have easily, and may yet be, converted for the stage. But Barinholtz drops his trust for just a few minutes, and it’s quite a shame, because the film was compelling and well written/acted for the first 90% of the time. Today it feels like it’s a crime to create a film or television show that doesn’t pick on one side or the other. This one appears to look at both sides honestly. “You know what? That is so not illegal.”

Gino Sassani is a member of the Southeastern Film Critic's Association (SEFCA). He is a film and television critic based in Tampa, Florida. He's also the Senior Editor here at Upcomingdiscs. Gino started reviewing films in the early 1990's as a segment of his local television show Focus. He's an award-winning recording artist for Omega Records. Gino is currently working on his 8th album Merchants & Mercenaries. Gino took over Upcomingdiscs Dec 1, 2008. He works out of a home theater he calls The Reel World. Favorite films: The Godfather, The Godfather Part II, The Body Snatcher (Val Lewton film with Karloff and Lugosi, not the pod people film), Unforgiven, Gladiator, The Lion King, Jaws, Son Of Frankenstein, The Good, The Bad And The Ugly, and Monsters, Inc.
Once Upon a Deadpool (Blu-ray) Trail of Tears Collection