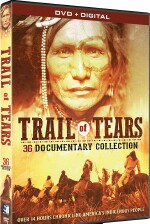 “I have no motive, my friends, to deceive you. I am sincerely desirous to promote your welfare. Listen to me, therefore, when I tell you that you cannot remain where you now are. Circumstances that cannot be controlled which are beyond the reach of human law and render it impossible that you can flourish in the midst of a civilized community. You have but one remedy in your reach, and that is to remove to the West. The choice now is before you. May the great spirit teach you how to change. Your friend, Andrew Jackson”

With friends like that, who needs enemies, or so the saying goes. It was called the Trail of Tears, and it is one of those actions which did not put this great nation is such a great light. The treatment of the native inhabitants of this continent has certainly been an embarrassment and along with slavery marks the darkest of moments in our history. Mill Creek has assembled a collection of documentaries that have been endorsed by the Cherokee Nation and has been collectively titled The Trail Of Tears.

“The day will soon come when you will unite yourselves with us. Join in our great councils and form one people with us. And we shall all be Americans – George Washington”

From George Washington through Thomas Jefferson, the official policy toward the native peoples was to find a way to assimilate the cultures. It was Washington’s wish that there eventually be no racial boundaries, and Jefferson was determined to find ways to “civilize” the natives. That meant learning English and adopting some form of Christianity. And while there were certainly land wars and treaties that were never honored, the worst of these land grabs happened under the careful watch of Andrew Jackson.

Cherokees occupied a rather large section in Georgia where they had been forced onto reservations. Still they lived on their ancestral land, and for many years an uneasy peace had existed between the cultures. The Cherokee Nation developed a written constitution based loosely on our own. It required officeholders to pledge a belief in one supreme being and disenfranchised blacks. It was forbidden for any man, even a chief, to sell land to whites under penalty of death. The new organized Cherokee Nation managed to live in peace with their white neighbors; that was until gold was discovered in Georgia. It became the first gold rush, and the Cherokee land suddenly became quite valuable. Laws were quickly passed that prohibited natives to pan, own, or sell gold. Of course, that wasn’t going to be enough to satisfy the greedy gold rush population who all wanted their share of the new-found wealth, and they didn’t care who claimed the land before the discovery of gold. Fortunately for them, and not so fortunate for the natives, they found a sympathetic ear in the newly elected President, one who felt cheated just four years earlier and created a spoils system that would do more than steal from the natives. Jackson and Martin Van Buren founded the modern Democratic Party, and it was bad news for the Cherokees who occupied valuable land.

Jackson ordered a removal of the entire population to land in the West. He gave them a two-year period of time to make the move voluntarily. Only 2,000 natives took him up on his grace period. The remaining 16,000 became a problem for the country when the grace period ended. The result was a collection of forced marches that took the lives of 25% of the natives along the 800-mile route. They were poorly fed, and many were barefoot. This collection of DVD’s cover many aspects of the Trail of Tears and other elements of Native-American history.

The Trail Of Tears – Cherokee Legacy

This is a two-part documentary of the forced removal of the Cherokee Nation from Georgia to Wyoming. It’s narrated with authority by one of the greatest voices of our time, James Earl Jones, who himself is part Cherokee. There are many dramatizations which form the weak link of this piece. While the story being told is compelling and emotional, the dramatizations are extremely low-budget and often do not accurately reflect the narration. In one point we’re told about the shoeless walking in the snow while watching images of people with shoes and walking in summer. There are too many instances where the narration does not appear to be describing what we see on the screen. The editor here was not paying attention. The documentary is punctuated by various actors reading words taken from Jackson and other participants of the time and place. These tell us more than the actors ever do. There are descendents of the event who often talk to us in the native tongue of the Cherokee. Their stories are moving and become a vital part of the entire picture. This is not just a story of the Trail of Tears but a rather complete history of the Cherokee people leading up to the 1820’s and the beginning of this great sorrow. There’s a lot to learn here, but the presentation can be rather disjointed.

This hour-long documentary is once again narrated by James Earl Jones. This feature looks at some of the shared history between Native Americans and black Americans. Both were treated as something less than human. It was even harder for those of mixed blood who could not find comfort from either community who shared some of the same bigotry as the white population. We get to hear the stories from some of these mixed-blood people. At times either could be a slight advantage. Blacks weren’t being forced on an 800-mile forced march, but they weren’t free either. While many mixed-bloods were not slaves, they lived in extreme poverty and endured prejudice from all sides.

This hour-long documentary comes with a warning that the feature is not to be considered medical advice, and viewers aren’t encouraged to follow any of the methods portrayed. Of course, that is in direct conflict with how these methods are indeed portrayed. Many practitioners of early Native American medicine demonstrate quite clearly how to create these potions. It’s just like a television cook who goes through a meal preparation. Participants use words like “first you” do this. “Then you” … You get the idea. Still, the medical methods usually involve herbs and alternative healing methods that are practiced by a growing number of holistic healers today.

The documentary is hosted by Gregg Howard, who is a Cherokee himself. He looks at how modern medicine has been “rediscovering” some of these remedies. Apparently it’s a $14-billion industry in America today. It’s a mostly patient-driven movement for people who have lost faith in the modern medicine for one reason or another. Unfortunately, some believe you must smoke a little tobacco in order for the gods to hear your prayers. And while they caution it’s just a little smoking, they pretty much lost me right there. They say it’s not habitual smoking, but necessary to carry your prayer to the heavens. Of course, we’ve known for 80 years that smoking will absolutely help deliver your message to the gods, because it offers you the opportunity to deliver it so much sooner in person.

“These things occurred despite the efforts of many good people with good hearts who sought to prevent them. These wrongs must be acknowledged if the healing is to begin.” Kevin Grover, Assistant Secretary Of Indian Affairs, Department Of The Interior, Sept 8, 2000.

This is the last of the hour-long documentaries and looks at the Indian boarding schools that popped up throughout the country in an attempt to “civilize” Native American children. They were often filled with good intentions. But they became centers for brutal abuse. We hear these stories from many who survived the schools. I give the feature credit for trying to be neutral on the subject. We do hear from people who received a better education than they ever could have on the reservation. Many went on to good careers. For some it was a place for children who came from families that did not have the resources to feed and clothe them. These schools produced success stories, one of which is the legendary Jim Thorpe. Unfortunately, there was far more cruelty than progress, and the lives of many were destroyed as others were saved. The feature lets you hear from both.

The final two discs in the collection are made up of 34 documentaries which are mostly filler. Most are government education reels and are pretty tedious. The image quality is horrible. These were mostly 16mm films that are fairly destroyed. It doesn’t help that seven or eight hours are crammed on each single DVD. It all pretty much ends on a sour note.

Like slavery, the holocaust, and other sad aspects of our globe’s history, these are things ever American should know and try to understand. I don’t believe that a society should pay for the sins of their fathers, but I do believe there is a responsibility to remember and do all that it can to avoid it happening again. The name doesn’t do it justice. “This was the Trail of Tears”.

Gino Sassani is a member of the Southeastern Film Critic's Association (SEFCA). He is a film and television critic based in Tampa, Florida. He's also the Senior Editor here at Upcomingdiscs. Gino started reviewing films in the early 1990's as a segment of his local television show Focus. He's an award-winning recording artist for Omega Records. Gino is currently working on his 8th album Merchants & Mercenaries. Gino took over Upcomingdiscs Dec 1, 2008. He works out of a home theater he calls The Reel World. Favorite films: The Godfather, The Godfather Part II, The Body Snatcher (Val Lewton film with Karloff and Lugosi, not the pod people film), Unforgiven, Gladiator, The Lion King, Jaws, Son Of Frankenstein, The Good, The Bad And The Ugly, and Monsters, Inc.
The Oath Family Guy’s 20 Greatest Hits