Posted in: Contests by Gino Sassani on February 2nd, 2019 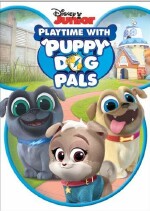 Our friends over at Walt Disney Studios  wanted to help us celebrate our brand new design here at Upcomingdiscs. They’ve sent over 2 copies of their DVD Playtime With Puppy Dog Pals. We’re going to pass them along to 2 lucky fans at Upcomingdiscs. This is a Disney Junior favorite. Join puppy brothers Bingo & Rolly as they get into the coolest adventures. There are 2 bonus episodes introducing new puppy dog pal Keia.

Upcomingdiscs NEVER sells or shares your information with anyone!

Gino Sassani is a member of the Southeastern Film Critic's Association (SEFCA). He is a film and television critic based in Tampa, Florida. He's also the Senior Editor here at Upcomingdiscs. Gino started reviewing films in the early 1990's as a segment of his local television show Focus. He's an award-winning recording artist for Omega Records. Gino is currently working on his 8th album Merchants & Mercenaries. Gino took over Upcomingdiscs Dec 1, 2008. He works out of a home theater he calls The Reel World. Favorite films: The Godfather, The Godfather Part II, The Body Snatcher (Val Lewton film with Karloff and Lugosi, not the pod people film), Unforgiven, Gladiator, The Lion King, Jaws, Son Of Frankenstein, The Good, The Bad And The Ugly, and Monsters, Inc.
The Shield – The Complete Series (Blu-ray) Tuesday Release Round-Up For Feb. 5th, 2019