Posted in: No Huddle by Gino Sassani on February 5th, 2019 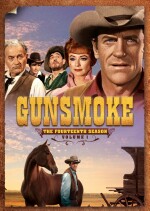 The two season halves have been released at the same time. It offers you the opportunity to buy it all together, and why wouldn’t you? You get 26 episodes on seven discs total. The only extras are a few episode promo spots.

Highlights from the season include: The season begins with a common theme on the show and Westerns in particular. In Lyle’s Kid, a man is hoping to use his fast-draw son to get revenge on the man who crippled his hands and is about to get out of prison. Zavala is a rather milestone episode for the series. Matt travels to the Mexican town of Zavala, where apparently only outlaws go. He is chasing a band of bad guys. Once there, he gets involved with a widow and her son, which brings out some paternal feelings from Matt. It’s a rather powerful moment and was later remade as the film Cutter’s Trail. The Waltons’ Will Geer guest stars in Slocum as an old friend of Matt’s who comes for a visit only to be set up for murder, and Matt’s on the hook to try to clear his gentle friend. Can you believe that Festus is in charge while Matt’s out of town? You better believe it. Watch The Money Store. When a widowed farmer’s kids happen to pocket some bank money, he gets arrested for robbery, and it’s up to Festus to straighten the whole thing out. A woman gets in the crossfire as Matt shoots it out with another bad guy in Time Of The Jackals. Matt discovers that he knew the woman he accidentally shot. She was an old love of his, and he must now protect the wounded woman from a contract her gang boyfriend put on her head. The Civil War is back on when a hunter discovers an abusive Confederate soldier in Dodge. Matt must find a way to keep a mob from going after the guy in The Mark Of Cain. In The Night Riders we also return to a Civil War feud. A judge puts together a Confederate gang to get revenge for his home being destroyed by a unit of Union soldiers during the war. They might just burn Dodge to the ground if Matt can’t stop them.

This was the show that keeps on going. While Dick Wolf managed to match the 20 years, Gunsmoke still has more episodes than any scripted television series in history. At 635 episodes, it’s proved its lasting power. Only The Simpsons beats it, so it’s the longest-running non-animated show in television history. We’re now only six seasons away from having the entire series out on DVD. That’s going to be nice to see it all up there on your video shelves. “Just ain’t nothing prettier than a full bottle.”

Gino Sassani is a member of the Southeastern Film Critic's Association (SEFCA). He is a film and television critic based in Tampa, Florida. He's also the Senior Editor here at Upcomingdiscs. Gino started reviewing films in the early 1990's as a segment of his local television show Focus. He's an award-winning recording artist for Omega Records. Gino is currently working on his 8th album Merchants & Mercenaries. Gino took over Upcomingdiscs Dec 1, 2008. He works out of a home theater he calls The Reel World. Favorite films: The Godfather, The Godfather Part II, The Body Snatcher (Val Lewton film with Karloff and Lugosi, not the pod people film), Unforgiven, Gladiator, The Lion King, Jaws, Son Of Frankenstein, The Good, The Bad And The Ugly, and Monsters, Inc.
Tuesday Release Round-Up For Feb. 5th, 2019 The Cloverfield Paradox (Blu-ray)