Posted in: Disc Reviews by Jeremy Butler on February 6th, 2019 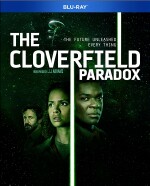 This was the big surprise during the 2018 Super Bowl halftime show; that this film that would be immediately available on Netflix after the game. As you can imagine, this was pretty significant for me, as I only had a vague knowledge of the film due to its limited promotion until this event. How apropos it is that this film be released around the same time of as the 2019 Super Bowl.  Part of the Cloverfield Universe and armed with basically a who’s who of international talent, I can say that The Cloverfield Paradox is among my favorite of the movie franchise, based predominantly on the performances of the cast. The plot of the film tends to be a bit heavy on the science, which may make it difficult to follow for those who aren’t that well-versed with that subject.

Set in 2028, the Earth is suffering a global energy crisis, and countries are close to going to war over the remaining energy reserves. In an attempt to resolve the crisis, the space agencies of the world have band together to form a coalition force on a space station to test a particle accelerator to create an unlimited power source.  After two years of failed attempts, tensions between the countries’ representatives begin to grow and accusations of sabotage are lobbied against one another, mainly at German physicist Ernst Schmidt (Daniel Bruhl, Captain America: Civil War).

Just as the situation appears as id it is about to deteriorate into chaos, the particle accelerator experiment is successful, causing celebration among the crew. Their jubilance is short-lived as the output of the accelerator becomes too much to handle and creates a power curve on the space station, creating havoc on the ship. While restoring basic power, they find Earth has vanished from view, and the gyroscope that aids in the station’s navigation is missing. As the crew works on repairs, strange events begin to occur, including the discovery (and subsequent rescue) of an unfamiliar woman fused with wires inside a wall.

The crew determine the particle beam overload has activated a paradox, and in doing so, moved the station to a parallel universe. A scientific principle of a paradox is that two identical objects cannot occupy the same space. Mother Nature does not allow such a thing and begins to correct such an anomaly, putting the crew in danger if they do not return to their own world. In order to survive the crew will have to come together; however, they soon discover that there actually is a traitor among them.

As I mentioned earlier, the cast is made up of a veritable who’s who of international talent: Daniel Bruhl, Gugu Mbatha-Raw, David Oyelowo, Chris O’Dowd, Zhang Ziyi, and many more. Each of these actors I have admired for their performances in other projects. Here they continue not to disappoint as the major draw for the film. Gugu (I just love her name) is the emotional heart of the film, as she has the biggest arc of the film. However, the top performer credit has to go to O’Dowd, who provided much-needed comic relief to the otherwise serious film. Bruhl displays that same kind of menacing that made him a breakout star in Civil War. I could go on and on about these actors individually, but the important question is how they function as an ensemble. As an ensemble they are a well-oiled machine; each character balances the other ones out. For example, Bruhl and Hennie, who played Russian engineer Sasha Volkov, are good counterparts, providing a human representation of the tension between their two nations likely occurring down on Earth.

The plot of the film is a bit dry and predictable. The inevitable twist and betrayal was less of a surprise and more of a foregone conclusion. The science of the film is likely to lose some people along the way. Such was the case for my watching companion. The subplot involving Gugu’s character’s husband, Michael, is little more than a distraction until the final moments of the film, something that left me with more questions than answers but did provide a platform for the inevitable sequel.

There are a number of notable of cameos as well, including Donal Logue, who plays a conspiracy theorist who actually shares the same surname as John Goodman’s character in 10 Cloverfield Lane; a nice Easter egg that may go unnoticed. Additionally, Simon Pegg and Greg Grunberg, who are frequent collaborators with JJ Abrams, provide vocals for the Radio Voice and Joe respectively. Talk about keeping it in the family.

The Cloverfield Paradox is presented in a 2.39:1 aspect ratio. The 1080p image is arrived at with an AVC MPEG-4 codec at an average of 26 mbps. This was not up to the picture quality that I was expecting for the film. There is plenty of detail captured, but there aren’t that many high-definition moments. I did not notice any obvious digital artifacts or compression issues. With a majority of the film taking place in the confines of a space station set in the future, I had anticipated more technological splendor that would be more visually appealing. The overall picture quality is more average than astonishing.

The Dolby Atmos presentation is where the film shines. The sound design is the biggest selling point for the film, providing a full immersive experience with the aid of an impeccable musical score provided by Bear McCreary. Perfect example was screams coming from within the walls which I have no trouble admitting were blood-curdling and filled me with a sense of dread. The dialog is clear and concise throughout the film. All in all, this is a remarkable sound presentation.

There are two featurettes on this disc. As a student of film, I always elected to hit the play-all button, which tends to provide additional understanding of the motivation and technical aspect of the film.  All together the runtime for all the segments is 29:11.

Things are not as they appear: The Making of The Cloverfield Paradox: This featurette provides an in-depth look into the inspiration and work that went into creating this visual universe. I encourage everyone to have a look at this before watching the film.

Shepard Team: The Cast: A in-depth look at the people that made this film enjoyable for me. The director stressed the importance of having the right group of people for the cast, and I believe he accomplished just that.

For those with access to Netflix, purchasing this disc is a waste, but for those without it, this is an opportunity to view content that was previously out of their grasp. The story fits snugly within the universe established by the previous films and is in my opinion a worthwhile addition to the franchise purely on the merits of the cast’s performance.

Jeremy Butler is a film school graduate of the International Academy of Design and Technology. He is been writing for Upcomingdiscs since 2012; however, movies have played a big part of his life for much longer. Favorite genres include horror, science fiction/fantasy, and comedy. Favorite movies are V for Vendetta, Boondocks Saints, Kiss Kiss Bang Bang, and The Godfather.
Gunsmoke: The Fourteenth Season The Game: The Complete Series