Posted in: No Huddle by Brent Lorentson on February 14th, 2019 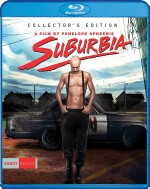 Shout Factory is at it again, releasing yet another cool and unappreciated film from the past, so hopefully a new audience can possibly embrace this fun, punk-rock, exploitation gem.  Writer and director Penelope Spheeris, who created the brilliant documentary The Decline of Western Civilization (1981), followed her documentary with the 1984 film Suburbia.  It’s no surprise that she would follow her punk documentary with a low-budget film that delves into the lives of kids who are entwined in the punk scene.  Seeing how Roger Corman is listed as a producer on the film, it should come as no surprise that this is shot on a low budget; this is one of those times where cheap goes a long way in setting the tone for a film and keeps the look of the film honest.  But is it worth taking a trip through Suburbia?

The opening sequence of the film has Sheila (Jennifer Clay) hitchhiking and being picked up by a young mother who has her child with her.  They are driving along through a rough area when the car gets a flat, and the passengers have no choice but walk to find a pay phone.  It’s while waiting for a payphone that we see the young child get attacked by a wild dog.  It’s a random and violent act, but as you continue watching you can see that there is a message hidden in this savage attack, and it’s also setting us up for the story that follows.

The film then takes a quick jump to a suburban neighborhood where we meet up with Evan (Bill Coyne), who has an altercation with his alcoholic mother, and it’s enough to have Evan pack his things and hit the streets.  While we follow him as he’s wandering the streets, he manages to make his way to a punk show.  For those who have seen Spheeris’ punk documentary, you have a good idea what the punk scene was like in LA at the time, but for those out of the loop, well, let’s just say it’s a far cry from catching Tony Bennett doing a performance.  It’s these moments at the punk shows where the film feels its most authentic.  It may not be the best cinematography, but the camera work in these sequences does capture the atmosphere of the scene, which again should be no surprise considering Spheeris’s previous work.

It’s after the show where the film begins to take shape when a drugged up Evan is picked up by Jack (Chris Pederson), who takes Evan to an abandoned neighborhood where Jack and his friends are squatting and have claimed a home as their own.  They call themselves “The Rejected”, or T.R. for short, and as Evan looks over what will become his new family, we see Sheila has managed to fit in with this group.  In this abandoned area the T.R. punks are not the only ones taking up residence. There is also a pack of wild dogs running around the neighborhood that have been previously abandoned by their owners.  It’s not much if a stretch to see the parallels between the dogs and the members of the T.R. gang; it’s nice to see that the film is attempting to inject some social commentary while still being entertaining.

Things get a bit heated when some suburbanites come into the abandoned neighborhood for some sport hunting as they drive around shooting down the stray dogs, and it’s not long till they have their sights targeted on the T.R. gang.  Seeing these altercations are definitely some of the more entertaining aspects of the film, perhaps one of my favorite moments has the T.R. gang crossing into the suburban neighborhoods and slipping into homes with their garages open and raiding their storage freezers.  The feud between the suburbanites and the punks is definitely most entertaining, but the film definitely offers up so much more, and don’t be surprised how these characters manage to grow on you.

Despite some bad acting — after all the cast is mostly made of kids that are a part of the punk scene and not professional actors — the film still manages to make an impact.  Sure, the film dates itself; one could almost argue that true punk is dead in today’s society, but there will always be an audience for this kind of film, and it’s why the film manages to hold onto its cult status.  Personally this is one of my favorite films that Corman has his name attached to, and though Spheeris has gone on to have a bigger career, I’d love to see her return to these characters or perhaps revisit this world during the times of today.  The film may not be perfect on critical term,s but personally I can’t think of a better film (non-documentary) that tackles the scene any better than this.

Shout does a good job with cleaning up the image with a 4K scan, though thankfully the film still maintains its grit, because seeing this looking pristine would just feel wrong; the film owns its raw and grainy look.  Also attached are a pair of commentaries that are filled with some interesting bits about the production itself.

Brent Lorentson is a horror writer and film critic based out of Tampa, Florida. With a BA in Digital Film, he co-wrote and co-directed Scavenger Hunt. His short stories have appeared in various horror anthologies. In 2019 his short script Fertile Blood will be a part of the anthology horror film Slumber Party. He is currently working on his first novel A Dark and Secret Place set to be released in late 2019. Favorite Films: Taxi Driver, Fight Club, I Saw the Devil, The Wild Bunch, Dawn of the Dead, A Clockwork Orange, Pulp Fiction, Heathers, The Monster Squad, and High Fidelity.
Bohemian Rhapsody (UHD Blu-ray) (4K) Lu Over the Wall (Blu-Ray)