Lu Over the Wall (Blu-Ray)

Posted in: Disc Reviews by Michael Durr on February 15th, 2019 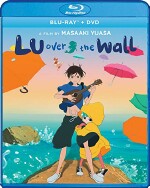 It is interesting to see two or more of a director’s works in a short period of time.  One sees similarities, differences, and how the filmmaker hones his craft as they improve with every production.  Masaaki Yuasa is certainly one of those directors, and if you enjoyed my review on Night is Short, Walk on Girl,  then you will want to go ahead and read my review today on Lu Over the Wall.  While there are similarities, I can safely say that is quite the departure from the previous film.  Let us take a look in the animated world of merfolk and the people who live around them.

A boy taps his fingers next to a microphone for an Internet streaming session as we read the comments below his video.  There seems to be a lot of interest below his post including the potential for some band-mates should he ever want to expand his horizons.  We soon meet the boy named Kai as he shuffles downstairs to have breakfast with his grandpa and father.

The family asks him about his summer, and he tells them that he’s attending school and a few other activities.  Grandpa warns him about the merfolk and tells him to stay away from the water.  Kai walks towards school and is joined by a pretty girl named Yuho and another boy named Kunio.  Yuho is the daughter of the president of Ebina Seafood which seems to be the main commerce in town.

Yuho and Kunio ask Kai if he is in a band.  Kai, who obviously loves music, pushes it to the side and says that it is just a hobby.  They tell him about the two-person band they currently have in SEIREN and that they practice secretly at Merfolk Island.  After school and checking out the mail, he gets back on his computer to read about the legends behind the Merfolk Island.  In the background, we hear something in the water, but when Kai turns around, it is no longer there.

Kai finally decides that he should go to the island with his friends to be part of SEIREN.  Kunio and Yuho show off the area, and they start practicing.  From the outset, Kai is criticizing how they perform, particularly with Yuho’s singing.  Yuho stops, and then we hear a singing voice coming from the water.   Kai investigates and he soon sees a mermaid in the water singing.  This is probably a good time to cue the opening credits.

We are soon introduced to Lu, the curious and heartwarming mermaid.  She grows legs when she hears music (or her fin separates), and her personality is infectious.  Kai, who had been gloomy and depressing to this point, suddenly wants his music to be heard everywhere.  He starts caring a lot for Lu, but unfortunately this does not come without its share of consequences.

This movie is quite beautiful and excellently acted.  The growth of the main characters are fascinating as well as certain subplots that tell us a wonderfully crafted story.  I think I might have enjoyed especially the relationship between Lu and her dad, but that could be the dad in me talking.  The movie also shows a good contrast of how the town reacts to the stories they hear even though what’s taking place before them is very different.

I thought this movie was a lot more accessible than Night is Short, Walk on Girl, as it never felt creepy; it never felt out of place.  It is a gorgeous movie, full of life and a relationship between the two characters that I’m not sure I would describe as romantic, but perhaps something much more powerful, as Lu clearly gives Kai the gift of living life.  A relationship that has to be seen in order to be understood.

The film is shown in a 1.77:1 widescreen picture.  This movie is primarily animated in a combination of hand drawn and flash animation.  It looks brilliant, perhaps not as detailed as Night is Short but still shows the careful eye of the animator as he paints many fun and vibrant scenes.  The Blu-ray does an excellent job of showing off these colors, and there is no drabness or washouts of any sort.  The only minor complaint I really had was that I wanted to see more detail of the water and the inhabitants of the sea.  Perhaps give the father and Lu some more peculiarities and have them stand out.

The audio tracks are  DTS HD 5.1 in Japanese and English (French Dolby Digital 5.1 also included) . English (SDH and original) and French subtitles are provided.  Sounds are strong, and there is a suitable use of surrounds as necessary.  Dialog is easy to decipher here; no trouble with the English or Japanese track in that regard.  The music is fun and peppy and fills the speakers at every opportunity.

I will say that I probably enjoyed the English track as much as the Japanese track despite the differences.  In some cases, I might actually even enjoy the English track more, as the actors seem quite a bit more lively than their Eastern-world counterparts.

There was a minor issue with the audio tracks and how they didn’t always come up once selected in the menu.  For reference, 1-English, 2-Japanese, 3-French, 4-Commentary.  If you have trouble, back out to the menu and try again.  I’ll explain this more in the special features, but I figured I should throw it in here as well.

Audio Commentary with Filmmakers :  This is frustrating to say the least.  The commentary is in Japanese but with special English subtitles.  However, you can’t play those subtitles and the regular subtitles at the same time.  Furthermore, with the way this disc was authored, it doesn’t always come up right (it might be the commentary and say English movie subtitles, so you might have to back out and fix it through the disc menu or your own player menu until you get the right combination).  This would have been better served with interviews instead.  (Subtitle guide, 1-English SDH, 2-English for use with the Japanese Track, 3-French and 4-Commentary)

From what I could glean from the commentary, they talked a lot about the flash animation that was used along with the goals that they were able to meet for the animation company.  They also talk about how it was to work on this film and Night is Short, Walk on Girl at the same time.  Naturally, they also speak about the use of music in the film.  Finally, they speak how scares were integrated into the movie without making it seem scary and other fun topics.

Interview with Masaaki Yuasa 28:16 : The narrator here practically gushes as he interviews the famed director.  They talk way too much about how Masaaki won the Cristal/Grand Prix awards and don’t focus quite enough on the actual movie.  When they actually talk about the movie, they do some comparisons to Your Name as well as other films like Ponyo and Panda Go Panda: Rainy-day Circus.  They also go into certain scenes and take us through how Masaaki decided to animate them and his inspiration.  Good piece, just less gushing, please.

As mentioned previously, this movie did win a couple of awards including the Cristal of Best Feature Film at the Annecy International Animated Film Festival as well as the Ofuji Noburo Award at the Mainichi Film Awards.  So it not only succeeded at home in Japan but also around the world for its animated feats.  The movie is quite accessible and should make anime fans of just about anybody in a very warm and friendly way.  It gives a terrific message without sacrificing a good, meaty story.

The disc despite some mechanical type issues does offer a strong video and audio presentation that is sure to delight fans looking for another anime to show off their movie room with.  The extras are unfortunately a bit problematic but do provide interesting information for us to absorb.  The movie is an easy recommendation, one that should never seem dated and should delight fans for years to come.  Enjoy, and make sure that your feet don’t tap so loudly that you wake up the people around you.  Oops, sorry.  It is quite infectious, I dare say.  Take care.

Michael Durr has been reviewing movies for the better part of fifteen years now. He primarily enjoys thrillers, sci-fi, animation and even a little courtroom drama. His favorite films include Escape from New York, the Goonies and anything with Alyssa Milano. When he’s not praising Kurt Russell as the greatest actor of our time or scratching his head over a David Lynch flick, he’s spending time at home in Texas with his lovely wife, Lori and his amazing son. How they put up with him is a mystery, but even Basil Rathbone doesn’t have the time to solve that one.
Suburbia (Blu-ray) They Shall Not Grow Old