Can You Ever Forgive Me?

Posted in: No Huddle by Jeremy Butler on February 27th, 2019 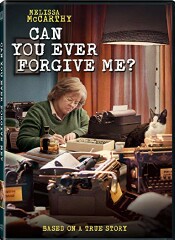 Looks like Melissa McCarthy is attempting to branch out from her usual branch of raunchy comedy. Or at least she is dipping her toe in the water of such an idea, as Can You Ever Forgive Me is not without its raunch. Based on  the novel by Lee Israel, a known literary forger said to have forged over 400 false letters from notable writers, McCarthy plays the character and brings the comical quips that she has became famous for. Paired with Richard E Grant, the two work off one another with positive results. Probably one of the best examples of a non-romantic pairing I’ve seen this year.

When we meet Lee (McCarthy), she is a down-on-her-luck autobiographical writer who has just lost her job, is behind on her rent, and relates better to her cat than she does to people. At one point in time in her career, she was a best-selling author, who was known for her ability to disappear in her writing and showcase her subject almost as if she was them, a skill that will serve her well later in life.

Desperate for money, she pawns a obscure letter she received in the past for a moderate sum. When the buyer tells her that that if the letter was of better content, the value would be higher, she takes a chance, crafting a fake letter and passing it off as the genuine article. It works, and she suddenly sees dollar signs and becomes engrossed into the world of forgery.

During her descent into criminality, she reconnects with an old friend, Jack Hock (Richard E Grant), an upper-class bum who begins to get her to come out of her shell. Lee is living the high life for a moment until things take a turn when her works of art attract the attention of the FBI.

I will confess a period of disorientation, as I knew next to nothing about this project, and it seems like we were at least 10 minutes into the story before McCarthy’s name was first uttered. Other than that, the movie was a great success in my opinion. I cannot speak to how true to the source material the film is, but to my mind the story was easily relatable and believable. I would have liked for there to have been more emphasis on the forgery techniques that Lee utilized to pass off her works as the genuine articles. There are some depictions such as her using original paper stock and using her oven to age her facsimiles, but I can’t help but imagine they there had to be additional sophisticated methods that were implemented as well.

I had no idea what to expect from this movie. I figured it was going to be another autobiographical tale, but as I said, McCarthy and Grant make a phenomenal team on screen. Their back-and-forth was witty and hilarious. There is a definite chemistry on screen between them.

The main thing that caught me off guard about the film was that I wasn’t expecting it to be funny. Obviously I assume that there may have been a few inadvertent moments given McCarthy’s profile in the comedic realm; however, she was not the scene stealer for me; Richard E Grant was. Though he came off at times as dim-witted, he still was able to match quips with McCarthy, and the way he carried himself despite not having a place to live or any reliable source of income, he exuded class and sophistication. In this regard, the two leads were polar opposites. Where Grant had class, Lee was brash, antisocial, and don’t get me started on her hygiene. Trust me, when you get a look at her apartment, you will understand. I dare anyone to look at the state of her home and not cringe.

Can You Ever Forgive Me wasn’t a box office winner, but all in all it is a good movie experience, and I recommend seeing it. It has historical value as it is based on a real-life individual; however, it does add credence to the idea that crime does pay given that the memoir the film is based on made it to the bestseller list.

Jeremy Butler is a film school graduate of the International Academy of Design and Technology. He is been writing for Upcomingdiscs since 2012; however, movies have played a big part of his life for much longer. Favorite genres include horror, science fiction/fantasy, and comedy. Favorite movies are V for Vendetta, Boondocks Saints, Kiss Kiss Bang Bang, and The Godfather.
Tuesday Release Round-Up For Tuesday Feb. 26th, 2019 Mary Queen Of Scots (UHD Blu-ray) (4K)