Posted in: Disc Reviews by Brent Lorentson on February 27th, 2019 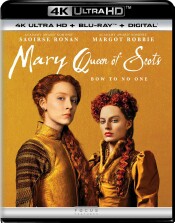 At first glance, Mary Queen of Scots has all the makings of a film you’d expect to be nominated for numerous awards; after all, it’s a period drama that showcases some remarkable performances from Saoirse Ronan and Margot Robbie.  Unfortunately this retelling of the story between Queen Elizabeth (Robbie) and Queen Mary (Ronan) is bogged down with its politics and the struggles these women have being leaders while their differing religions present a conflict preventing them from ever working together.  Let me just jump into this and attempt to sort this film out.

For those who are not history buffs, I won’t disclose who it is that we see in the opening moments of the film as they are being led to their execution.  It’s an odd way to open the film; despite it being historically accurate, it just seems a bit off-putting.  The film then takes us to Mary arriving in Scotland to claim her throne after being away in France.  At the same time Queen Elizabeth has been ruling over England and Scotland; since she hasn’t married and has no children, it is Mary who is ready to take on the reins of becoming the heir to the throne of England.  This is the start of many squabbles between the two queens, where we see their relationship dissolve from a unique sisterhood to the pair becoming envious of one another.  Basically how most families are, only without the royal labels.

From the start, what fuels this film is the anticipation of seeing Elizabeth and Mary finally meeting, as when each attempted meeting gets delayed in some manner the tension continues to rise.  Seeing how these women square off against the men who seek their attention and power definitely has its moments, though it’s a shame when we see how easily Mary seems to be swayed by a suitor whom she foolishly marries. The turmoil only continues to intensify as Mary’s life and throne are on the line, and it is here where things seem to spiral a bit out of control.  The problem is the film aims to deliver us to see these women square off. History tells us that it seems the women never met to begin with, but this is cinema; “truth” is allowed to be toyed with.  When the moment does finally arrive where we see them together, it is beautifully shot and performed, but if anything it still feels anticlimactic.  And basically that is how the rest of the film is.

Aside from the great performances, what stands out most are the cinematography and the costume designs.  While there is elegance to the film, the sets and costumes feel properly lived in and authentic to the time.  When we see Queen Elizabeth as she is suffering from smallpox, her scars and her makeup simply elevate the performance that Robbie delivers.

Mary Queen Of Scots is presented in an aspect ratio of 2.39:1. The ultra-high-definition 2160p  image is arrived at by an HEVC codec with a very nice average bitrate of over 75 mbps. This is a period piece where textures are kind of in the spotlight. We have elaborate period costumes that excel in this ultra-high-definition image presentation. Detail is equally impressive, particularly when given the dark atmosphere provided throughout. This is a gloomy film with little color that really pops. Of course, there are very notable exceptions. It’s almost comical the way Robbie’s Queen Elizabeth is portrayed. It’s a bit like Pennywise the clown. The bright orange wig truly stands out against the bleak style. White balance is quite nice when seen through falling snow on the fateful dark evening where Mary meets her historic fate. Unfortunately, it also contributes to the white face that goes toward that clown look. There are some sweet establishing shots of Scottish and English vistas that also place nicely, albeit briefly, against the moody atmosphere.

The Atmos track defaults to a fairly solid 7.1 mix. Dialog is what must be served in a film that features little more than talking heads. It cuts through just fine. Nothing aggressive here and certainly nothing very dynamic to speak of. There’s one explosion that reminded me that I actually do have a nice powered sub in my system, but it was here and gone before you could notice. The score is heavy on the strings and matches the dark and somber atmosphere I talked about in the image presentation.

The extras are on both the Blu-ray and 4K copies of the film. It’s brief promotional stuff.

An Epic Confrontation: (3:58) The focus of this is the short scene when the leading characters actually meet. The piece admits it’s a break from authenticity, as the two Queens never actually did have the encounter. It’s a dramatic moment played out more so by the fact that the two actors hadn’t met on the set before this scene was shot. It was Robbie’s final scene on the film and Ronan’s very first.

Tudor Feminism: (3:35) Merely an extension of the focus on the two characters.

Something About Mary: (2:24) Spend sometime with the five Mary characters (Queen and her maidens) as they hang out on the set.

The film’s downfall is with the script; there is simply too much story crammed into a two-hour film with the expectation that the viewers are all able to follow along.  Basically by doing this the film loses out on picking up the casual filmgoers, which is a bit of a risky gamble.  If the film had perhaps thirty minutes tacked on to give the plot some time to breathe, rather than feel so jumbled and rushed, this could have been a different experience altogether.  Still, the film will have its fans, but I’d expect this to be overlooked with The Favourite gaining buzz.

Brent Lorentson is a horror writer and film critic based out of Tampa, Florida. With a BA in Digital Film, he co-wrote and co-directed Scavenger Hunt. His short stories have appeared in various horror anthologies. In 2019 his short script Fertile Blood will be a part of the anthology horror film Slumber Party. He is currently working on his first novel A Dark and Secret Place set to be released in late 2019. Favorite Films: Taxi Driver, Fight Club, I Saw the Devil, The Wild Bunch, Dawn of the Dead, A Clockwork Orange, Pulp Fiction, Heathers, The Monster Squad, and High Fidelity.
Can You Ever Forgive Me? The Possession of Hannah Grace