Posted in: No Huddle by Brent Lorentson on March 4th, 2019 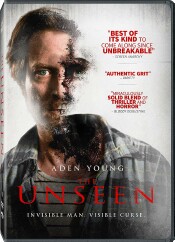 It’s been a while since there has been a good invisible man film.  It’s one of the original Universal horror monsters that just doesn’t seem to get the fanfare that I feel it deserves.  Some of the greats in Hollywood have tackled incarnations of the character. John Carpenter with Memoirs of an Invisible Man (1992); then there was Hollow Man (2000), but neither of these films are what you would consider classics, though they are films I had fun with.  So when The Unseen crossed my path, I was looking forward to this. After all, it has been a while since this type of character has been tackled; then factor in that it is being helmed by Geoff Redknap, who previously worked as a special effects artist on Cabin in the Woods, Watchmen, and numerous other projects.  This just seemed like it would be a good match.  The result is a bit of a mixed bag.

When we meet Bob Langmore (Aden Young), he’s a bit of a suicidal mess who works at a lumber mill.  I can appreciate that this doesn’t go the typical route where we see a scientist who gets involved with an accident that causes them to transform.  For some reason Bob just seems to be afflicted with this disease that seems to be eating away at his physical form.  He’s able to hide this by using gloves and tape, but Bob understands that he can only conceal this for so long.  His family life is a mess as well; his wife has left him, and his daughter wants little to nothing to do with him.  The family dynamic is actually one of the strong points of the film, though I wish it didn’t wait so long for Bob to actually have screen time with his daughter.

The problem I have with the film is how it can’t seem to decide what it wants to be, as it throws up several story threads but seems to avoid the angle of a man becoming invisible.  Sure, it is touched on, but this could have been something great with the effects that are on display.  This is the kind of body horror that is missing in modern films, but instead the film would rather focus on Bob’s past as a hockey player or him trafficking drugs.  By the time the film decides to actually embrace the horror of what is happening, we are basically in the third act, and it feels a little too late.

Despite my issues about this not embracing its body horror potential, what I did like is the side story that follows Bob’s daughter, Eva (Julia Sarah Stone).  At first we think Eva is nothing more than your typical rebellious youth, but as the story unfolds, we get to see her investigate her family’s past, and this results into a fun moment where Eva and her friends go to investigate an abandoned mental asylum.  Now, I won’t reveal too much, but I really like some of the things that are presented at the asylum, and my brain kicked into overdrive thinking, “wouldn’t it be cool if the asylum was haunted, but it was actually just invisible patients?”  I really was getting my hopes up, but then the film attempts to ground itself in a slight form of reality, as we discover Eva’s grandfather was at the asylum at one time.

When the film reaches its third act, I feel it was part of a different film entirely from what I had just been watching.  It’s not what I expected, but I wasn’t disappointed either.  On the bright side I feel like this was a solid effort from a first time director that didn’t rely too heavily on the effects and instead attempted to tell a story.  The problem is the script just feels so uneven and filled with so many ideas that are not properly fleshed out that the result is definitely underwhelming.  With a tighter script this could have been something great, and it leaves me curious as to what may be next for writer and director Geoff Redknap.

Brent Lorentson is a horror writer and film critic based out of Tampa, Florida. With a BA in Digital Film, he co-wrote and co-directed Scavenger Hunt. His short stories have appeared in various horror anthologies. In 2019 his short script Fertile Blood will be a part of the anthology horror film Slumber Party. He is currently working on his first novel A Dark and Secret Place set to be released in late 2019. Favorite Films: Taxi Driver, Fight Club, I Saw the Devil, The Wild Bunch, Dawn of the Dead, A Clockwork Orange, Pulp Fiction, Heathers, The Monster Squad, and High Fidelity.
Greta Tuesday Release Round-Up For Tuesday March 5th, 2019