Posted in: The Reel World by Gino Sassani on March 2nd, 2019 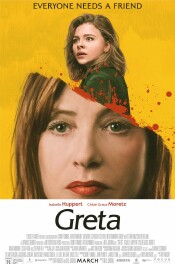 “I’m the master of the slow fade.”

That would be a good way to describe director Neil Jordan and his latest Hitchcockian thriller, Greta. He also co-wrote the screenplay with Ray Wright, but let’s be perfectly honest here. The film doesn’t score on the writing. It’s a completely predictable thriller, and there’s nothing truly innovative or clever about the story. There’s nothing here that we haven’t seen before. This isn’t a clever film by any stretch of the imagination. It’s the execution of a tried story that makes this film as compelling as it actually becomes. And all of that comes from some rather unique cinematography and two quite powerful performances by the leading ladies in the star roles. Put that together and this ordinary film at least touches on something close to extraordinary.

Frances is played by the talented young actress Chloe Grace Moretz. Frances is a Boston girl who recently lost her mother and leaves the city to put some distance between her and her father, played by the brilliant but underused Colm Feore. She’s staying at a loft owned by the family of her friend Erica (Monroe). She’s a bit on the naive side, and Erica is sure that New York is going to have her for breakfast. She works as a waitress at an upscale restaurant. One night when she is riding the subway, she discovers that a woman has left her purse behind. There’s no one at Lost & Found, so she decides to return the purse to the woman who has ID in the purse.

That’s where she meets the elder French woman Greta, played hauntingly by Isabelle Huppert. The woman appears lonely and estranged from her own daughter, who is supposedly off discovering herself in Paris. Frances feels sorry for the woman and starts to return to keep her company. She takes her to the pound to adopt a dog, hoping it would cheer the woman somewhat. Things take a dark twist during a meal preparation at Greta’s home when Frances discovers that their meeting might not have been entirely accidental. She decides to break off contact and distance herself from Greta. But Greta is persistent. She shows up at work, at her apartment, and stands on the street just to stare her down. The police are no help, and she even tries to appease Greta and pretends to leave New York for a trip. You can probably guess where this is all going, and Frances finds herself in a great deal of trouble when she discovers what it is that Greta does with her unsuspecting good Samaritans.

The film is hardly ever surprising. There are moments when Neil Jordan thinks he’s fooling us, but I can tell you he never really does. But he’s smart enough to recognize where his true valuable resources are in the film. It is in the two leading ladies. Moretz is convincing as the girl who doesn’t quite seem to get it until it’s too late. Her character also makes many of the stupid moves that make you want to tear your hair out and scream at the screen. Still, she makes it all believable enough that you care what happens to her and begin to fear for her safety quite early in the movie. But the most amazing work comes from Isabelle Huppert, who is absolutely creepy in this movie. She does it with an ease that is as eerie as her character. There’s not the usual villain overacting here. Her expressions are almost deadpan, but the danger is carried through those dead but somehow expressive eyes. It’s the best kind of performance in my humble opinion. Those eyes are as deep as a scary damp well, and you just know with one look that you can fall hopelessly inside. Without these two wonderful performances, this film goes from pretty good to Lifetime Channel television movie territory. It’s really that close.

Jordan is one of those hit-or-miss directors. He’s had wonderful films with staying power like The Crying Game, but his more recent Byzantium was a mess of a vampire art film. There’s no doubt here that he gets some of his inspiration from Hitchcock, and there are so many moments here where he’s trying to match the Master of Suspense, but it never really happens. Clever camera angles and an attempt to be playful with the audience don’t add up to Alfred Hitchcock, and Jordan absolutely falls flat in these obvious attempts. He’s not a master by any means, but he knows how to get unique and powerful performances, and it’s the only thing that saves this film. It’s a slow burn, and Jordan risks losing audience members who don’t have the patience a film like this requires. It’s more commercial than many of his films, but it’s not mainstream enough to overcome his art house intentions and rather obvious attempts at misdirection. The film also has a very short window to draw some box office attention. Next week is Captain Marvel, and before long the tentpole films are going to dominate the box office dollars and screens. I suspect Greta will come and go with little notice, which is a bit of a shame, because these powerful performances just aren’t going to be seen by the numbers they deserve. The home video market may be just where this film finds its audience. It may not rake in much at the box office, but it may enjoy a little more staying power. “Just try to get rid of Greta”.

Gino Sassani is a member of the Southeastern Film Critic's Association (SEFCA). He is a film and television critic based in Tampa, Florida. He's also the Senior Editor here at Upcomingdiscs. Gino started reviewing films in the early 1990's as a segment of his local television show Focus. He's an award-winning recording artist for Omega Records. Gino is currently working on his 8th album Merchants & Mercenaries. Gino took over Upcomingdiscs Dec 1, 2008. He works out of a home theater he calls The Reel World. Favorite films: The Godfather, The Godfather Part II, The Body Snatcher (Val Lewton film with Karloff and Lugosi, not the pod people film), Unforgiven, Gladiator, The Lion King, Jaws, Son Of Frankenstein, The Good, The Bad And The Ugly, and Monsters, Inc.
The Possession of Hannah Grace The Unseen