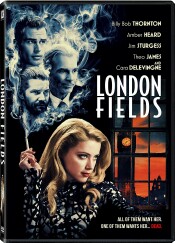 A femme fatale who predicted her own demise — now that is the stuff good noir films are made of. And what better person to play the role of said femme fatale than Amber Heard, fresh off her performance in the popular DC Comics film Aquaman? Granted this movie was filmed before the DC film, but delayed due to lawsuits, which only goes to add further intrigue to the movie. Originally screened at the 2015 Toronto Film Festival, London Fields features a cast of well-knowns including Jim Sturgess, Theo James, Billy Bob Thornton, and perhaps most notably Heard’s ex-husband, Johnny Depp. One can only imagine the effect this film would have had if it had not been for a few setbacks. As it stands, London Fields is laced with intrigue, and Amber is compelling, but the film amounts to very little substance.

Nicola Six (Heard) has always possessed the ability of premonition, capable of seeing others’ deaths as well as predicting her own on her 30th birthday, which is rapidly approaching. Intertwined in her demise are three men who find themselves drawn to her beauty and mysterious demeanor: Keith Talent (Sturgess), a local degenerate who dreams of fame and is in debt up to his eyeballs to a loan shark (Depp) eager to take him apart; Guy Clinch (James), a local sophisticate trapped in a loveless marriage; and Samson Young (Thornton), a writer suffering from crippling writer’s block and in dire need of a muse.

Despite knowing that her end is approaching and at the hand of one of the three men that she has enamored, Nicola engages in a game of cat and mouse with each of the men, playing a different role for each one, whether it a seductress in search of darkness or a wholesome good girl. As her birthday approaches, Nicola continues her games, driving each man mad and bringin her closer to the future she has foreseen.

This film has held intrigue for me for several months; it was actually one of my most anticipated movies of the year. Now that I’ve seen it, I’m forced to admit some disappointment with the substance of the story. There are many aspects of the tale that I enjoyed, but I found it incomplete in regard to character motivations, namely Nicola. When we meet her, not only has she accepted her fate, she is actively driving towards it. She seeks out her killer and essentially forces his hand. Why? Her character basically asking that question outright early on in the film, and she offers no real explanation beyond that her fate is sealed. From my vantage point, this made her death more of an assisted suicide rather than flat-out murder.

Beyond that, the film is sultry and reminds me of an old-fashioned murder mystery, and that was enough to maintain my interest, although the inevitable twist toward the end I was able to determine from the beginning of the film, which somewhat dampened the mystery aspect. Amber Heard was the perfect person to embody this character, who is also the central character of a book of the same name. Heard is in her element, capable of conveying the sensual qualities of a seductress as well as displaying shyness and innocence, all depending on the person she is trying to deceive. Other than her, Thornton is an engaging narrator who sets the tone for the film.

Had the film be released back in 2015-2016, I believe it would have had a great impact, as it would have the advantage of the riding the height of several stars’ successful film runs (James’ Divergent franchise and Heard’s Justice League announcement). As it stands, the film will have to draw on Heard’s Aquaman performance to help bolster audience interest. As a murder mystery it is enjoyable if a bit predictable, but it is Amber Heard’s sex appeal that steals the show in this film. She is deserving of the title of a modern-day femme fatale. When watching the men go crazy over her, I had to question whether they were acting, or had they really fallen under her spell. You be the judge.

Jeremy Butler is a film school graduate of the International Academy of Design and Technology. He is been writing for Upcomingdiscs since 2012; however, movies have played a big part of his life for much longer. Favorite genres include horror, science fiction/fantasy, and comedy. Favorite movies are V for Vendetta, Boondocks Saints, Kiss Kiss Bang Bang, and The Godfather.
Green Book (UHD Blu-ray) (4K) The Last Man (Blu-ray)