Posted in: Disc Reviews by Brent Lorentson on March 19th, 2019 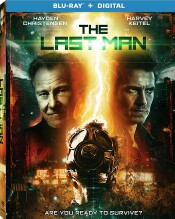 This is one of those films where the cast had me equally excited and concerned with how the film would turn out.  On one hand it has Harvey Keitel; the guy is a living legend between his roles in Reservoir Dogs, Bad Lieutenant, Taxi Driver, Mean Streets, and countless others.  Keitel is one of those actors who elevates just about any film he’s in, and he’s in several films I’d even call classics.  Then on the other end of the spectrum there is Hayden Christensen, one of the most lifeless performers to ever grace the screen in my opinion. I still have bouts of anger when I see him as Anakin Skywalker.  But I’m always ready to have an actor surprise me, and I always go into a film with an open mind once I sit down and start watching it.  Unfortunately The Last Man is a dud and was a film I struggled with so many of you won’t have to.

The film opens up with a dream sequence that looks more like a first person shooter scene in a video game.  Apparently this is a dream that Kurt (Christensen) has been having quite often. This is told to us through the film’s narration, and I’d just like to come out and say I really hated the voice-over work on this film.  I get that they were trying to go for a neo-noir style, but the narration is delivered with such a monotone delivery it felt more like a voice track someone would listen to while trying to sleep.  Another issue with this narration is that it is so on-the-nose with the information that it is telling us things we can obviously see and figure out for ourselves.  It was fine when giving us a little back story, telling us how the western civilization collapsed, but as you continue watching, everything you hear just begins to seem redundant.

Even though the world seems to have already endured its collapse, the worst is still to come; at least that is what Noe (Keitel) seems to believe as he preaches on the streets that the end of days is near.  Kurt ends up crossing paths with Noe and hears his crazed rantings about what the future holds, and this motivates Kurt to decide to transform his home into a bunker.  In order for Kurt to make all the renovations he needs he has to find himself a job at a security firm.  For some reason the film attempts to throw in a romance; this just seems so out of place and out of character, but I guess this was a lame attempt to try to attract a female audience while also throwing in some pointless and ineffective sex scenes.

Really a lot of this movie seems like it started as a decent idea for a short film and they injected so much nonsense to fill out the story so they could make this a feature.  One of the things I really got annoyed with was the neo-Nazi gang that seems to stir up trouble.  I don’t know if it’s the script or simply the acting, but these guys just got on my nerves and were more annoying when I believe they were supposed to be menacing.

To just be blunt, I really just didn’t like this movie. Christensen and Keitel do their best with the script they had to work with, but this film just didn’t have the budget to be what it attempted to be.  A few years ago there was a great film Take Shelter about a guy who believed the world was going to end, so he made a shelter to protect his family.  That film kept things grounded and was a far more effective film that was exploring several of the same themes and simply executed them better.  While I can appreciate some of the visual effects, choosing to be so ambitious on a limited budget only makes it all the more obvious that the budget simply wasn’t there for this film.

The Last Man is presented in the aspect ratio 2.40:1.  The 1080p image is arrived at with an AVC MPEG-4 codec that bounces between 17mbps and 34mbps over the course of the film.  This is a film that has a made-for-TV quality where the CGI at times may look good but never really convincing.  There is a blue hue that seems to stick with it through the duration of the film; it’s there to set a mood, but I really didn’t feel it was effective here.  There is definitely an attempt to replicate the look and style of Blade Runner, but with the budget of the film this is something that was never going to be achieved.  What does work are the establishing shots where we get a wide look at the world the story is set in. These moments look good and go by fast enough where it doesn’t look too computer-generated.  My biggest issue is with the look of the opening dream sequence. It looks too much like a video game for my taste.  As for the low light scenes, we do get plenty of detail, and at times maybe too much detail where the characters look too clean for a world on the verge of collapse.

The DTS HD-Master Audio 5.1 track is better than expected. In the opening we get some decent use of the surround setup, and I like how the sound was used for the voices he hears where you can’t quite tell where it’s coming from.  The dialog is clear and leveled, and there is some decent use of ambient noise. One of the better points is later in the film when Kurt gets locked up and we can hear other inmates.

There is a trailer for the film along with some trailers for other Lionsgate films.

I really had a hard time watching this film. For many I can see them falling asleep or get restless waiting for this film to pay off at some point, when it never will.  If you’re looking for a good film about a guy preparing for the end of the world, check out Take Shelter; that’s a great little film that executes in every way this film doesn’t.

Brent Lorentson is a horror writer and film critic based out of Tampa, Florida. With a BA in Digital Film, he co-wrote and co-directed Scavenger Hunt. His short stories have appeared in various horror anthologies. In 2019 his short script Fertile Blood will be a part of the anthology horror film Slumber Party. He is currently working on his first novel A Dark and Secret Place set to be released in late 2019. Favorite Films: Taxi Driver, Fight Club, I Saw the Devil, The Wild Bunch, Dawn of the Dead, A Clockwork Orange, Pulp Fiction, Heathers, The Monster Squad, and High Fidelity.
London Fields Foreigner – Live at the Rainbow ’78