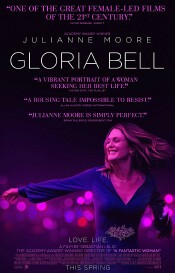 It’s Julianne Moore at her best, showing the great performer she is in a romantic comedy with heartbreak.  As Gloria Bell, she makes the lead role compelling and full of life giving her all and even more. It’s perfect for a date night, so grab your best guy or gal and check it out. And it has an explosion of a sound track that includes “Gloria” by Laura Branigan and “Total Eclipse of the Heart” by Bonnie Tyler. A steady visitor to the night club scene, Gloria (Julianne Moore) dances away the hours with men she meets at the bar after a long day working at an insurance office.  Not a spring chicken and divorced, she has been an easy mark for any kind of romance as long as she can dance.  Her family has supported her, especially her mother who’s constantly in her life either on the cell or showing up for lunch. But her life is starting to be empty, that is until she meets Arnold (John Turturro), a free-spirited guy who asks her out.  From then on Gloria starts to blossom all over again, even showing him off to her ex-husband.

Director Sebastian Lelio takes a second look at the script he wrote and filmed in 2013 in Santiago, Chile, and casts English speaking actors for the roles with a setting in L.A.  It’s a chance however for Moore to shine in a vibrant role, and as Gloria she nails it, breathing life into the woman’s boring past. Lelio knows how to work his actors, and he puts Turturro through his paces as the guy who picks up Gloria and makes her a believer in him.

While the whole cast contributes to the film, it’s really a showpiece for Julianne Moore who becomes Gloria and shows the woman’s wild side.  It’s as if she has been Gloria forever, but never has had the opportunity to show how much talent she really has.  I enjoyed her performance, and there’s a couple of scenes where she opens up for the camera for a roll in the hay showing her exceptional beauty.

Gloria Bell has been rated R for sexuality, nudity, language, and some drug use. The film targets women, but the men should enjoy it as well.

A superb and vibrant performance by Julianne Moore makes the film a winner.

John Delia has been on all sides of the movie business from publicity, writing for publications and on line blogs, script writing, to film making. Writer, critic, film editor he has worked as a film critic on this second go around for 14 years. He earned his Bachelor’s degree at the college of Journalism and Communications at the University of Florida in Gainesville, Florida. John is an active member of the Southeastern Film Critics Association (SEFCA) . Favorite Films: Lord of the Rings/Hobbit trilogies, The Godfather trilogy, the Indiana Jones trilogy (I didn't like the 4th), The Avengers and for TV it's Game of Thrones. As for animation it's a tie between anything Pixar and everything Hayao Miyazaki.
Cult Epics Wrap Up: Blue Movie & Nekromantik 2 Us