Posted in: The Reel World by Jeremy Butler on April 5th, 2019 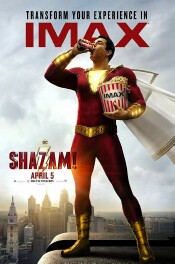 Zachary Levi is every geek’s dream come true, becoming a superhero as he takes on the mantle of Shazam. I am not well versed with this hero, but it is safe to say that he is not someone to discount, having an impressive number of abilities that put him in the same league as a superhero. Going in, I was not expecting a lot from this film, as the previews made it seem very silly and without substance. However, I can honestly say that the previews did not do this film justice. Thanks to lively performances by Levi as well as his counterpart Asher Angel, much needed comic relief from Jack Dylan Grazer, and a surprise star-studded twist toward the film’s climax, Shazam is the film to see this weekend.

Billy Batson has spent his teenage years searching for his mother after being separated at a carnival when he was a young child. Determined to be reunited, he has run away an impressive 26 times as well as sought out every Rachel Batson in Philadelphia. After his latest search brings him in direct conflict with local law enforcement, he is sent to a group home run by two former wards of the state. There he meets Freddy, a disabled foster kid with a love of superheroes.

One day after coming to Freddy’s aid against two bullies, Billy finds himself transported in front of an ancient wizard seeking a champion to protect the world from dark magic. Speaking the wizard’s name (Shazam), Billy is not only transformed to a adult superhero, he is imbued with the wisdom of Solomon, the strength of Hercules, the stamina of Atlas, the power of Zeus, the courage of Achilles, and the speed of Mercury.

Meanwhile, Dr. Thaddeus Sivana has spent a lifetime researching the mystical arts since childhood, when he was initially chosen to become champion until his dark heart proved him unworthy. Desperate to obtain the power that he was denied, a grown Sivana eventually finds his way back to Shazam’s world and takes the eye of Envy (had to look that name up) and gains the immense power of the seven deadly sins.

It is up to Billy to prevent the havoc that Sivana will wreak with his newfound power, all while trying to avoid the seductive opportunity that his newfound abilities offer him.

Well, it appears that DC is finally starting to dig themselves out of the hole that the failed Justice League movie put them in. With the successful outing of Wonder Woman, the record-breaking performance of Aquaman, and the potential of Shazam, the DC Universe is building some traction. It isn’t enough to fully erase the Justice League movie from memory, but it is several steps in the right direction. We will see if the franchise can keep it up given the loss of Affleck as Batman and the unclear status of Cavil as the Man of Steel.

Shazam is different from the other DC films to date; more lighthearted and less dark. There is still that element of loss that many famed superheroes are forced to endure, but not as extreme as in other stories. Despite going against the established pattern, Shazam works. The lightheartedness makes for a more compelling and relatable story. This is due to in no small part to the dynamic between Asher Angel and Jack Dylan Grazer as well as Grazer and Levi. The friendship between these characters and the much appreciated comic relief keeps the film from becoming stale. Through Grazer’s character, Billy Batson learns humility and gains the recognition that though he has had a tough life, he can still aspire to something more.

Mark Strong is a bit typecast in the role of the villain, but it is understandable, as he does good villainy; his performance as Sinestro in the unpopular Green Lantern movie, being one of the film’s better qualities. In this foray into the superhero genre, he is ruthless and cunning, willing to do anything to obtain the power that was once denied to his character. On the flip side, I enjoyed the youthfulness and immaturity of Levi’s performance, which was much needed given the duality of his character. I have been a fan of Levi since Chuck, and despite my limited knowledge of the Shazam comics (basically what I’ve seen of the character of the animated films), I can think of no other person who could have played the character.

The importance of family is the theme at the center of the film, which is most evident in the final fight, where a nod to the comic series is brought to life. I not going to give too much away, but let’s just say a lot of familiar faces get the chance to be heroes.

Though I don’t see Shazam breaking records like its predecessors (not due to any inability to measure up on the film’s part, but more because the character is not as well known as the others), it is unquestionably the box office favorite for the weekend, and with good reason. I would even hazard to say that it could take the following weekend, but sadly I do believe that is where the ride is like to end with the imminent approach of Marvel’s endgame.

Jeremy Butler is a film school graduate of the International Academy of Design and Technology. He is been writing for Upcomingdiscs since 2012; however, movies have played a big part of his life for much longer. Favorite genres include horror, science fiction/fantasy, and comedy. Favorite movies are V for Vendetta, Boondocks Saints, Kiss Kiss Bang Bang, and The Godfather.
The Mule (UHD Blu-ray (4K) Pet Sematary (2019)