Posted in: Disc Reviews by Gino Sassani on April 5th, 2019 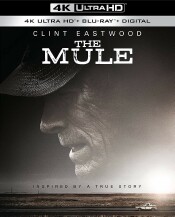 Ever since I was a kid I used to love to hear and read stories about the iconic filmmakers from the days before I was born. I soaked up material on John Ford and Hitchcock. Fritz Lang and James Whale were superhuman, it seemed. Meeting Robert Wise was a dream come true, and getting an invitation by Ray Harryhausen himself to attend his Hollywood star ceremony was an honor. But all of these folks were either already gone or at the end of their careers by the time I got to this planet. Since that time there have been plenty of great talents, but the only one in my lifetime who ever seemed to live up in that rarified air was Clint Eastwood. As both an actor and director, I’m not sure anyone has made more of a mark during my generation. Clint’s approaching 90, and reality dictates that his days of directing movies are coming to a close. As an actor every film has the potential to be his last. So I have to ask myself why Warner Brothers would give this potential swansong such unfair treatment. Critics were not given a chance to attend screenings when the film came out. As a voting member of SEFCA, I received over 150 films for awards consideration as 2018 came to a close. None of them happened to be The Mule. When I asked a Warner rep about the slight, I was admonished to forget about the film and just move on. I was even told by a SEFCA co-member that I shouldn’t be so greedy for screeners. I’m not ordinarily a conspiracy nut. But something doesn’t pass the sniff test here, and after finally seeing the film in 4K, I’m convinced of it.

The Academy Awards are no longer what they once were. What used to be an extraordinary celebration of the art of film and filmmaking is now a political rally. I suspect the “powers that be” didn’t want Clint Eastwood anywhere near that political rally. He’s got nothing to lose at this point, and I don’t think he’s the kind of guy to just shut up and take it. I can’t prove any of this, of course. And I might even catch some flack for proposing the idea. But if it’s true, there are a lot of folks who should be ashamed of themselves. Warner Brothers bears the greatest shame, if true. I doubt anyone has made as much money for Warner over the years than Clint Eastwood  and he’s owed better treatment. This is not about my or anyone’s political beliefs, but about a legend who won’t be here for decades to come, and it’s unfortunate if the fact his politics don’t align with the Hollywood establishment caused this movie to be treated like the crazy uncle you lock away in the attic when company comes. ‘Nuff said.

Clint Eastwood plays Earl Stone. He’s a horticulturist who raises prize daylilies and has cared for his flowers and business at the expense of his family over the years to the point of missing his daughter’s wedding. Eventually the internet eats away at his business, and he ends up losing it all, including his family. He’s broke and alone when he’s offered a offer he can’t refuse. A group of guys are willing to pay him well just to drive “cargo” from one place to another state. He parks his truck with the keys in the glove box, and an hour later there’s an envelope with a generous amount of cash inside. Too good to be true. The film follows Earl on his first several rides. Of course, he’s a drug mule, and even after he discovers what he’s doing, the money’s just too easy and good. Now he can be a big man again and use his money to help friends and charities.

Eventually Earl’s perfect record makes its way to the cartel boss, Laton, played by Andy Garcia. Earl is going to be entrusted with bigger and more important runs, but those jobs come with babysitters. Tensions begin to flare as Earl insists on doing things his own way. When he finally makes a choice to be there for his family, the cartel starts looking for him, because he’s holding a few million dollars in drugs in his truck bed.

The cartel isn’t Earl’s only trouble. Bradley Cooper plays DEA Agent Colin Bates. He’s a young hotshot agent looking to make a name for himself. He’s aggressive, and along with his new partner Agent Trevino, played by Michael Pena, he’s pressured a cartel inside man into becoming an informant, and now he’s on Earl’s trail as well. Now it’s only a matter of who will get to him first and what will happen when they do.

This is not Eastwood’s most powerful film or role. This might just be the first time he’s played a character who was so out of control of his situation. Seldom has he played a more vulnerable character. Earl Stone is a victim of a changing world and of his own bad choices. But even in his helplessness, there is still a rebellious spirit in the 90-year-old character. Even around dangerous drug runners with guns, he’s defiant. When one of them tells him he’s a pain in the behind, Earl tells him to go see a proctologist. No Clint Eastwood character is totally lamb-to-the-slaughter material. The amazing thing about the film is that Clint had to put in some real acting to play the rather limited abilities of the aged Earl. At pretty much the same age, the real Clint Eastwood is still running circles around a much younger cast and crew.

The Mule is the kind of film Eastwood always did best. It’s strictly a character study held together by an amazingly thin plot but strengthened by strong direction and a very solid cast. On the surface there’s nothing new here at all, yet Eastwood puts together a cast that puts meat on bones that didn’t really have any. Garcia is underused as the Cartel boss who grows fond of Earl and reveals weakness to his fellow hoods. Bradley Cooper and Michael Pena share some of the best chemistry in the film. Cooper is proving himself to be one of the strongest talents of the last few years. A Star Is Born uncovered a great amount of diversity in his arsenal, and The Mule just plays to his strengths. A scene in a diner with Earl and an as yet uninformed Agent Bates is one of the more powerful moments in the film. There’s no action. It’s rather slow-paced, but there’s music in the spaces between these notes, to be sure. And Eastwood is the master conductor.

I can’t help but love the character’s swipes at cell phones and how much today’s people have their heads stuck in them. I’m known for remaining cell phone free to the point that it’s a joke to most who know me. It’s perhaps my favorite aspect of Earl’s personality. There’s enough of those rubs in there that I can’t help but wonder if Clint shares some of the same thoughts.

The Mule is presented in its original aspect ratio of 2.40:1. The ultra-high-definition 2160p  image is arrived at by an HEVC codec with an impressive average bitrate of 65-70 mbps. The magic of this image presentation is in the details. The facial close-ups reveal the minimal acting approach that’s been Eastwood’s style for over 60 years. An expression can say a lot, and the arrival of UHD finally allows a home video audience the ability to appreciate that style in a whole new level. The film is also somewhat of a road movie, and some of the vistas are remarkable. He drives through urban areas, through salt flats, and desert. The establishing shots remind me of the old Eastwood Westerns, and I’m sure there some intentional atmosphere going on here. Black levels are spot-on with plenty of shadow definition. It’s not exactly a colorful canvas. Clint’s painting a depression-era looking drabness that fits the theme perfectly. Clint’s first truck is a clunker, and his second is jet black. No one is sporting flashy outfits or colors. The detail there is in the textures of both the fabrics and the environments.

The DTS-HD Master Audio 5.1 is there to serve the dialog. This is one of those UHD audio presentations where you don’t need Atmos or 7.1. Eastwood’s scores are always minimalist, and that’s certainly true here. Most of the actual music you’ll hear is Clint singing along to his radio, which was a nice little touch. Don’t expect much ear candy here. It would only distract from the real focus of the movie, and that’s the characters and their interactions. The subs are there merely to fill the depth and the dialog. It’s perfectly small, which is what gives it so much size and weight.

The Making of The Mule – Nobody Runs Forever: (10:59) This behind-the-scenes feature is mostly a love-fest for Clint Eastwood. Ordinarily I snark at these things, but is there anyone more deserving? There is some nice production footage and short segments on costumes and authenticity.

Would I have voted for this film as Best Picture if I had seen it last year? No. That honor still belongs to Green Book, in my eyes. It wouldn’t have changed my vote. It still would have been nice to have had that opportunity. Warner rarely holds out films from critics, and I received tons of other Warner offerings for award consideration. But I have finally seen the film and am happy to have it in my 4K collection which, to be fair, I do owe to the folks at Warner Brothers. Credit where credit is due. “I won’t hold with any ill feelings.”

Gino Sassani is a member of the Southeastern Film Critic's Association (SEFCA). He is a film and television critic based in Tampa, Florida. He's also the Senior Editor here at Upcomingdiscs. Gino started reviewing films in the early 1990's as a segment of his local television show Focus. He's an award-winning recording artist for Omega Records. Gino is currently working on his 8th album Merchants & Mercenaries. Gino took over Upcomingdiscs Dec 1, 2008. He works out of a home theater he calls The Reel World. Favorite films: The Godfather, The Godfather Part II, The Body Snatcher (Val Lewton film with Karloff and Lugosi, not the pod people film), Unforgiven, Gladiator, The Lion King, Jaws, Son Of Frankenstein, The Good, The Bad And The Ugly, and Monsters, Inc.
Bumblebee (UHD Blu-ray) (4K) Shazam (2019)