Posted in: Disc Reviews by Brent Lorentson on April 9th, 2019 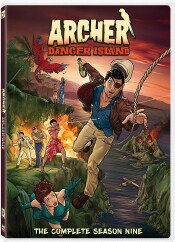 It’s been expected that Season 10 of Archer would be the last one. With Fox recently putting out the 9th season Archer: Danger Island, it’s giving fans a chance to catch up before Sterling Archer (voiced by H. John Benjamin) sets off on his final adventure.  There are still plenty of questions left unsolved from Season 7, and if you were hoping Danger Island would help fill in the blanks, well, sorry to disappoint; instead, season 9 gives us something completely new that I enjoyed, though I have to admit it left me scratching my head for where things may be going.

Season 9 takes us to a little island in the South Pacific named Mitimotu in 1939 just before the second World War is about to kick off.  In this timeline, Sterling is a one-eyed seaplane pilot who works for his mother, Mallory (Jessica Walter).  Sterling wakes up in bed with the newly wedded Cheryl (Judy Greer). No, Archer and Cheryl are not married; instead she is wed to a treasure-hunting Nazi named Fuchs (Chris Parnell).  For those who were wondering, Pam Poovey (Amber Nash) is around as Sterling’s co-pilot, and I have to admit she was my favorite part about this season.  The one oddball addition to these characters is yet another familiar voice: Lucky Yates, who this season is playing a talking parrot (well, macaw) that can say more than just a few words and in fact enjoys bantering with the characters over the course of the season.

This season seems to have a lot in common with Indiana Jones and Casablanca as film references go, but there is a lot of pulpy-jungle adventure-fun that is going on in this season.  It is how Lana, or the Danger Island version, Princess Lanaluakalani (Aisha Tyler) is used this season that feels a bit forced at times.  I know the show wouldn’t quite be the same without Lana being Archer’s lustful obsession, but it seems a bit forced when we see her as really nothing more as an ancestor to the island natives who wants to retrieve the idol and have it put into a museum.

The idol is the driving force of this season; everyone wants it for one reason or another though mostly it all comes to fortune that means a new life off the island.  Despite all the talk about the idol and how everyone wants the treasure, it takes just about half the season before things really get going, BUT once we do finally get to see Archer and Pam working together to find the idol, the show really is a good time. As we get to see Archer dealing with cannibals, quicksand, howler monkeys, and his unique relationship with Pam, the show manages to show that it still has something left in the humor and storytelling department.  There’s a moment where Archer and Pam find themselves trapped in a pit of quicksand that easily became one of my favorite moments of the season, only to be outdone by the confrontation with cannibals.

This was a shorter season, only eight episodes instead of the usual 10 we’ve grown used to over the years.  I’m fine with the eight episodes for this story, considering how long it seemed to take to get the momentum going.  What has me curious is how this season ended. While I’m not going to spoil anything, it does appear as though the series is about to reboot itself again, as it references a certain famous franchise in the final moments of the season.  While I have my theory about how this may or may tie back to Season 7, it seems we still have a bit of time to wait and speculate on things to come.  It’s sad that this 10th season may be the last, but I’m hopeful that the writers will close out the final season with the bang that the show deserves.

Brent Lorentson is a horror writer and film critic based out of Tampa, Florida. With a BA in Digital Film, he co-wrote and co-directed Scavenger Hunt. His short stories have appeared in various horror anthologies. In 2019 his short script Fertile Blood will be a part of the anthology horror film Slumber Party. He is currently working on his first novel A Dark and Secret Place set to be released in late 2019. Favorite Films: Taxi Driver, Fight Club, I Saw the Devil, The Wild Bunch, Dawn of the Dead, A Clockwork Orange, Pulp Fiction, Heathers, The Monster Squad, and High Fidelity.
Pet Sematary (2019) Welcome to Marwen (Blu-ray)