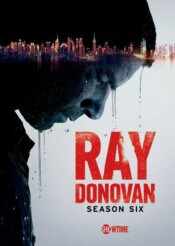 The Donovan family has been a prominent part of the Showtime lineup for six years now. What started as a series about a fixer didn’t quite remain that way for long. The stories very quickly focused on this rather dysfunctional family, and we appear to love our dysfunctional families in movies and television. Most are awkwardly dysfunctional without a lot of heart, and Ray Donovan was certainly heading in that direction before the fifth season took us on one of the best emotional rollercoaster rides in the business. For me that season and the death of the family matriarch changed the stakes and the center for each of the characters. Abby was the thing that held this family together no matter how twisted things got. So we ended up with what I consider the best season of the show to date. So where did we go from there, you might ask. You don’t have to. Showtime has released the complete 6th season of Ray Donovan on DVD, and now you can find out for yourself. Here’s my take.

When a family loses its center, things tend to unravel a bit. That’s not quite how it works with this family. They’ve been unraveling since the first episode, and let’s be perfectly honest here, a long time before we first met them. It’s more than that. Ray is at rock bottom over Abby’s death and finds himself in New York, where coincidentally other members of the family have migrated from L. A. He’s saved by a down-on-his-luck cop, played by The Wire’s own Herc, Domenick Lombardozzi. He ends up bringing Ray home, and the two share each other’s misery for a while. But what Ray is truly avoiding more than his own grief is working for the powerful woman Samantha Winslow, played just as powerfully by Susan Sarandon. She’s really the female version of Ray in many ways. She uses people, and she’s very used to getting her way. What she wants is Ray’s help to assist her in obtaining a private prison and its lucrative property. The first stage of that plan brings Ray into the world of politics, where he works to fix the New York City mayoral campaign for newcomer Anita Novak, played by Lola Glaudini. But Ray can’t help shooting himself in the foot and ends up on a cycle of changing sides to the point everyone hates him, and it costs him and those close to him dearly.

Of course, the show just wouldn’t be the same without Jon Voight’s portrayal of Mickey. He’s not going to let prison stop him from being a player. He once again manipulates Bunchy (Mihok) into getting him out and putting both on the run from the feds … once again. But Mickey’s not content with his freedom. He wants to get back at Ray and Daryl (Hall) who is enjoying the movie life shooting the film he stole from Mickey before setting him up for the prison fall. Meanwhile Terry (Marsan) isn’t letting a degenerative disease keep him from doing some rough underground fighting. No one in this family knows what’s good for them.

One of the more interesting family members introduced this year is Aunt Sandy, played by Sandy Martin. She’s both huge trouble and some of the show’s best comic relief as she tries to rip off Mickey and Bunchy and ends up part of the season finale where everyone is pitching in for a massacre cleanup that has its dark humor moments, to be sure.

Finally, there’s daughter Bridget, who is played by Kerris Dorsey, and both actress and character have truly come into their own in this and the last season. She’s the new emotional center, and she’s trying to have her own life away from all of the family drama. She’s engaged and working hard, but like Michael Corleone is fond of pointing out she gets pulled back in. Does her part. And proves herself a Donovan in the end.

This is a dark season and allows Liev Schreiber to evolve the character to a dark and dangerous place. We see a very different Ray here who doesn’t always have the answers anymore, and his plans backfire more than they work this season. He can’t get out of his own way, and most of this is grief, but a lot of it is stubbornness. This season the family starts to close in on itself, and Ray’s “empire” is getting smaller. It’s a more intimate season, and while the stories aren’t as tight as they have been, the acting is at an all-time high for the series. I enjoyed these character moments more than any of this season’s plots. Credit the actors for being willing to spend a lot of time in these dark places. It’s the chance to breathe life into a show that was showing a creative void by the 4th season. It’s got to be tough on all concerned, but this was the only way to turn it all around. “Everybody wants to go to heaven, but no one wants to die.”

Gino Sassani is a member of the Southeastern Film Critic's Association (SEFCA). He is a film and television critic based in Tampa, Florida. He's also the Senior Editor here at Upcomingdiscs. Gino started reviewing films in the early 1990's as a segment of his local television show Focus. He's an award-winning recording artist for Omega Records. Gino is currently working on his 8th album Merchants & Mercenaries. Gino took over Upcomingdiscs Dec 1, 2008. He works out of a home theater he calls The Reel World. Favorite films: The Godfather, The Godfather Part II, The Body Snatcher (Val Lewton film with Karloff and Lugosi, not the pod people film), Unforgiven, Gladiator, The Lion King, Jaws, Son Of Frankenstein, The Good, The Bad And The Ugly, and Monsters, Inc.
Welcome to Marwen (Blu-ray) Escape at Dannemora