Posted in: Disc Reviews by Brent Lorentson on April 16th, 2019 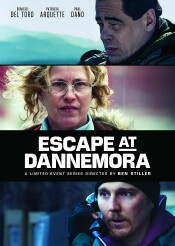 Back in 2015 when the prison escape took place in upstate New York, this was one of those news stories that kept me glued to my television, as I’m sure it did for countless others.  As the story unfolded in front of news cameras, the story just got more scandalous, and as the days ticked by with the prisoners on the run, a part of me was sort of rooting for them.  I know they’re felons, but seeing them manage to outmaneuver authorities and evade capture, it was sort of like rooting for the underdog, because most of the time these incidents don’t end well.   It’s no surprise that Hollywood would latch onto this story, but what is surprising how well this Showtime mini-series turned out.  With funny-man Ben Stiller at the helm, I was surprised to see that he was attached to direct this. He’s been successful behind the camera, and my favorite films of his have been Reality Bites and The Cable Guy.  So how did the nearly 7 ½ hour series turn out?

The series opens up with Tilly Mitchell (Patricia Arquette) being questioned by New York State Inspector General Catherine Scott (Bonnie Hunt) in June of 2015.  This was a bit of surprise that they would chose this moment to open up the series, but this is for the most part Tilly’s story. You’d want to believe this is a falling-from-grace story and that she was simply conned by these prison inmates, but as you’ll see, Tilly is no saint.  Arquette is almost unrecognizable beneath the makeup, the accent and weight gain for the role. This performance goes to show that Boyhood was no fluke and that she is one of the best actresses working today.  Things then shift back to January, and we meet inmates Richard Matt (Benicio Del Toro) and David Sweat (Paul Dano). They are in neighboring cells and also work together in a tailor shop at the prison that Tilly happens to oversee.

Tilly has managed to fall in love with Sweat. Considering this is a seven-hour series, it’s unfortunate that we don’t get to see how their relationship began. Instead we see them engaging in quickies in the back room. Matt knows what is going on but doesn’t show much interest. He instead is working on his side hustle with one of the guards, played by David Morse. Basically Matt trades art and occasionally snitches in exchange for special privileges. One of these privileges results in him finding a potential for escape from the prison.

With the series spread out over seven episodes, you can imagine there would be a lot of filler, and there certainly is plenty of engaging character development. For me it’s Paul Dano who had me reeled in on this series.  I doubt he would be anyone’s first choice at playing a felon convicted of murder, but from the moment he comes on screen, he had me believing he was this character.  In many ways it’s David Sweat who I feel is an unsung hero of this story and really had me rooting for him by the time Episode 7 rolled around.  For some I can see how having this story told over seven episodes can feel a bit long; after all, we really don’t get to see the guys working on their escape till Episode 3.  Sure, things could have been squeezed into a 4-episode series or even a simple 2-hour film, but so much about these characters would have been lost, and it’s fun getting to see these great actors delivering some of their best performances of their careers.

Episode 5 has one of the best moments in the series where we get to see Sweat going through a test run for the escape.  It’s intense, and it is a well-earned moment when we get to see Sweat pop his head out into the open for the first time. What follows over the rest of the episode is seeing how Sweat and Matt have to keep their heads low and stay out of trouble during their last day behind bars, and it proves to be harder than expected.  What makes this episode such a great payoff is everything we had to see occur beforehand to work out in their favor, and we really get to appreciate the stakes that have been set up for these guys.

Episode 6 takes a turn on the audience and takes us to the crimes that were responsible for putting Sweat and Matt behind bars.  I don’t want to spoil anything for those who are unfamiliar with the crimes, but I feel it definitely had me thinking twice about my thoughts on the inmates.  What we also get to see is how Tilly met her husband, Lyle Mitchell (Eric Lange), and this is the point in the series that made my head spin.  I waited till now to bring up Lange simply because his character was the one where over the course of the series I felt myself empathizing with the most, and it’s his performance that left me wondering why haven’t I seen more from this guy.  When we meet him he seems like this oafish lug of a guy who’s madly in love with his wife, and it really opens the audience up to how innocent people were impacted by this escape and raises the question of who really is the villain of this tale.

As for the end, those who know the story well definitely get to see a new perspective on it, and for those unfamiliar with how it all ends, well, I’ll simply say that this one that is worth watching to the very end. Creators Michael Tolkin (The Player and Ray Donovan) and Brett Johnson (Mad Men and Ray Donovan) and Jerry Stahl (the same writer Ben Stiller played back in the 1998 film Permanent Midnight), have crafted a well-written story that managed to keep me enthralled from start to finish.  Ben Stiller really impressed me with this film, but the most impressive take-away from this series was the outstanding performances from the cast. For fans of prison escape films, Escape At Dannemora is a worthy addition to the sub-genre and is one worth checking out while giving a glimpse of what prison life is like.

Brent Lorentson is a horror writer and film critic based out of Tampa, Florida. With a BA in Digital Film, he co-wrote and co-directed Scavenger Hunt. His short stories have appeared in various horror anthologies. In 2019 his short script Fertile Blood will be a part of the anthology horror film Slumber Party. He is currently working on his first novel A Dark and Secret Place set to be released in late 2019. Favorite Films: Taxi Driver, Fight Club, I Saw the Devil, The Wild Bunch, Dawn of the Dead, A Clockwork Orange, Pulp Fiction, Heathers, The Monster Squad, and High Fidelity.
Ray Donovan: The Sixth Season Glass (UHD Blu-ray) (4K)