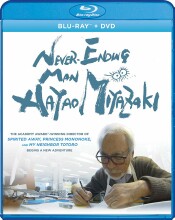 I’m not a big fan of documentaries, and this one did nothing to disabuse me of that feeling, as the focal point of the documentary is not exactly a pleasant individual when he is not wallowing in self-deprecating despair, though he does have one thing going for him, an imaginative and elegant ability to create beloved and award-winning animation. Hayao Miyazaki has been heralded as one of Japan’s greatest animation directors. His notable works included Princess Mononoke, which was the first animated film to win the Japan Academy Prize for Picture of the Year; his film Spirited Away took home the Academy Award for Best Animated Feature at the 75th Academy Awards, and the critically and commercial successful Ponyo, as well as many others. In 2013, he announced his retirement, and the documentary covers the period after his retirement as well as his return to animation in 2016.

The lack of established narration left me quite disoriented early on, as the purpose of the documentary is never directly addressed. I recommend reading the DVD jacket beforehand to better orient yourself. Essentially the entire film acts as a behind-the-scenes featurette, which appears to even annoy Miyazaki at times. Following his retirement announcement, Miyazaki seems to just be awaiting death. He even goes so far as to ask why he is still alive at several points throughout the documentary. This portion of the film is very difficult to watch, as it forces you confront what age and lack of purpose is capable of doing to the human spirit.

Though I did have a few moments of empathy for Miyazaki, they did not last due to archival footage of his interactions with his employees, which show how difficult he was to work with. His partner and friend even spoke to Miyazaki of the challenges of the staff to work under Miyazaki, claiming that on many occasion Miyazaki states that he was looking for another version of himself. To his credit, Miyazaki admits that his uncompromising nature drove his protégés away, which only added to his depression. Honestly, I wasn’t sure how much self-deprecation I was going to be able to take.

Luckily the film is not all dreariness, as despite retirement, Miyazaki is unable to quell his desire to create and reopens his studio for an animated short project. However, this endeavor is not without its complications as Miyazaki, an old master of the hand-drawn approach, has difficulty accepting the more modern CGI method. Despite this issue, life appears to be returning to the depressed Miyazaki, something that his closet friends and colleagues notice as well. Perhaps this old master is not done just yet.

My main gripe with the film is the filmmaking approach. It was interesting at first, like an all-access pass, but like Miyazaki, I eventually grew annoyed with it. It lacked direction in my opinion. A centralized narration to help guide and move the plot forward would have been a great help, especially given that the entire thing is told in Japanese with English subtitles. I don’t imagine a large international appeal for this documentary, as non-Japanese speakers will spend most of their time reading the dialog instead of following the story. At least that’s how I felt.

Intercut with the biography were scenes from Miyazaki’s popular works. Though these sequences are aesthetically pleasing, they add no real value to the overall story. They only really served to disorient me further from the events occurring on the screen. There was one positive thing I took away from this this movie: an appreciation for hand-drawn animation. Miyazaki’s ability as an artist may be his one redeeming trait in the film. On several instances, he talks about the importance of making the movement of the animated characters relatable and the need to put genuine emotion behind the designs, something he believes cannot be fully achieved through CGI. I’m not sure I’m in full agreement with him about that, but he does make a compelling argument, and watching him work allowed me to appreciate his perspective.

I truly hope that this documentary was not to be marketed as an underdog story, as a key component of those stories is that the central character needs to be likeable. I never really got there for Miyazaki. I felt pity for him at , and he did start to warm as person towards the end of the film, but the damage he did in the beginning was not forgotten. I suppose fans of his previous works may enjoy a peek behind the curtain, but I feel obligated to warn them that sometimes it is best just to live with mystique.

Jeremy Butler is a film school graduate of the International Academy of Design and Technology. He is been writing for Upcomingdiscs since 2012; however, movies have played a big part of his life for much longer. Favorite genres include horror, science fiction/fantasy, and comedy. Favorite movies are V for Vendetta, Boondocks Saints, Kiss Kiss Bang Bang, and The Godfather.
The Prodigy (Blu-ray) Level 16 (Blu-ray)