Posted in: Disc Reviews by Brent Lorentson on May 8th, 2019 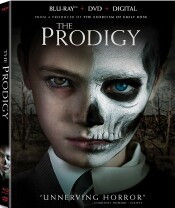 In my review for The Hole in the Ground I talk about my feelings about the “Evil Kid” sub-genre. To sum it up, it’s pretty much my least favorite of the horror genres. Well, this week I got back to back reviews for movies in that genre, and I have to say, The Prodigy managed to surprise me. It brought in only $14 million at the box office with a production cost of about $9 million, and most of the critic reviews were not so kind to the film.  Horror and critics really don’t get along so well, as history will show, mainly because for the longest time there has been a bit of a stigma attached to the genre. Thankfully things have started to change in recent years, but some critics still look at horror as nothing more than flashy B-rate cinema.  Here at Upcomingdiscs I’d like to think we have always loved the genre and appreciate it at its most absurd and sometimes gory nature.

I bring this up because The Prodigy is something of a curve ball in its genre, and with its R rating I feel it’s earned its rating and has given us a character that is genuinely not just creepy but in fact terrifying while walking through scenes with a sweet innocent face. I needed to step away from the film and sleep on this review, because I have to admit I was a bit conflicted, but when I woke up there was still a moment in this film that stuck with me, and I’m a little more impressed by this.

When the film opens we witness a woman escaping from a house and running into the woods.  This soon after leads to a raid on a man’s house. As the raid takes place, we are also watching Sarah Blume (Taylor Schilling) give birth to her son.  The raid goes bad when the man they are attempting to apprehend is shot down and killed.  The way this is shot, it’s easy to see that they are trying to imply this person’s soul or spirit is basically about to be reborn in this child, but who was this man?  Well, that’s part of the fun of this film.  We get to see the baby grow up and turn into the boy we’ll come to know as Miles (Jackson Robert Scott).

Sure, the film goes through the generic tropes of the genre, but it’s the performance Scott gives that helps elevate this one.  It’s when we see Miles snap on a student at school and beat him with a wrench where it’s clear to the audience this kid isn’t just going to wander around being creepy; this kid is genuinely dangerous.  Miles has always been off, and we see him do some bad and strange things, but he is always progressively getting more dangerous.  We can understand how Sarah and her husband are stressed about the situation and don’t know what to do.  After mentioning the husband, John Blume (Peter Mooney), I feel this was a wasted character. They bring up a violent history from his past, but nothing is done with this, and as the movie progresses John seems to be pushed further from the plot.  This is a shame, because Mooney does what he can with the character, and by them sort of pushing him aside, the film lost a lot of tension.  Instead the more formidable adversary for Miles becomes a new doctor who believes in reincarnation and believes he knows what’s going on with Miles.  There is an intense exchange between the doctor, played by Colm Feore, and Miles. From the moment this scene occurs the film really ramps things up and goes to a dark place fast.

There are moments in this film that will make you squirm, and when the film gets to the point where Sarah feels she’s figured out how to “help” her son, I’m glad this film decided to take this uncomfortable journey, because that’s what horror is supposed to be.  Sure, this film has its flaws.  The pacing is a bit wonky in the first half, but it’s the performances that drive this film.  Does the film lift elements from other films? Of course, and in this case it actually does a great little homage to the Mario Bava film Shock.  But most importantly this film really tackles the question, “What do you do as a parent when you discover your child is capable of murder?”  In today’s environment where children are killing children in their schools, this is a more practical question than it should be.  It’s something where we wish it was something that only belonged in horror films, but sadly, it’s something we are confronted with in our real world.  The film doesn’t glorify these violent acts; instead it shows the grim terror of the aftermath, though it doesn’t dwell on it as it should.

Personally I’d love to see what the filmmakers could do if a sequel were to spawn from this. There is enough in this “origin” story that can spawn an assortment of films  either as prequels or sequels.  While some young parents may be turned off by this film, I feel there is an audience that will embrace this.

The Prodigy is presented in the aspect ratio 2.40:1.  The 1080p image is arrived at with an AVC MPEG-4 codec at an average of 36 mbps.  This is one of those films where the subtlety in the image goes a long way and helps define the characters.  For instance when we are with the mother, there are a lot of cooler tones, and blue is definitely a color that comes through over everything else.  The coloring is even a little desaturated but still manages to deliver natural skin tones.  When the story shifts to Miles or when his darker self is coming out, colors seem to warm up, and we have a color palette with yellows, oranges and reds, which come through nicely.  There is some nice depth with the blacks. A scene at the start of the film where Miles is playing hide and seek with his babysitter is a good example of this.  What is most striking is the characters’ blue eyes. In the mother they seem natural, but there is something haunting about the single cold blue eye that Miles is sporting.

The Dolby Digital 5.1 track is definitely heavy on the bass, especially when using drone sounds to set the tone. It’s not distracting, but it’s definitely hard to not notice it.  Thankfully the dialog comes through clear and balanced. This could have been problematic, since the range of sound can be as low as a whisper to moments of shouting, but thankfully there’s no need to adjust the volume.  Another nice surprise: the jump scares are light here, so again no need to worry about sudden obnoxious sounds to disorient you.  One of the cool bits where we get a nice balance of sound mixing that is simply creepy is when Miles is sharpening his blades: simply unsettling.

Commentary w/ Director Nicholas McCarthy: I was a little nervous since he was carrying the track alone, but he manages to keep this track informative and interesting.  He offers plenty of insight about alternate and deleted scenes to various aspects of the production of the film.  It may not be the best commentary I’ve heard, but it was a fun listen.

Promotional Featurettes: (4 Minutes) There is a Play-All option, which I’d recommend using considering there are only three little featurettes.  They discuss the story, the horror genre, and the casting for Miles.  Really there isn’t much here at all.

Really I went into this film with low expectations, but this film sucked me in as it gets progressively better and goes to a dark place.  While I’m not a fan of this sub-genre, this is definitely one of the more fun entries and is a fun horror flick for a late-night movie night.

Brent Lorentson is a horror writer and film critic based out of Tampa, Florida. With a BA in Digital Film, he co-wrote and co-directed Scavenger Hunt. His short stories have appeared in various horror anthologies. In 2019 his short script Fertile Blood will be a part of the anthology horror film Slumber Party. He is currently working on his first novel A Dark and Secret Place set to be released in late 2019. Favorite Films: Taxi Driver, Fight Club, I Saw the Devil, The Wild Bunch, Dawn of the Dead, A Clockwork Orange, Pulp Fiction, Heathers, The Monster Squad, and High Fidelity.
The Hole In The Ground Never-Ending Man: Hayao Miyazaki