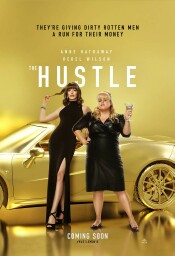 “No man will ever believe that a woman is smarter than he is.”

I love con movies. You name it, I’ve seen it. There is just something about someone or a group working towards pulling the wool over the eyes of some arrogant, corrupt fool that believes that they can’t be outsmarted. Mainly, it is about the scam; I like to see the elegance of the con. Lately I’ve been starved for a good con movie in recent years, essentially since Will Smith’s Focus, which was underrated in my opinion. I am aware that Ocean’s Eight was released last year, but I was not a fan. Not for sexist reasons; I just don’t like it when a franchise replaces the established characters for a whole new ensemble. Speaking of sexism, that is a major theme for The Hustle, which stars Anne Hathaway and Rebel Wilson as two con women who use their feminine wiles to manipulate and swindle men who underestimate them. First impression, I was expecting this to be a dry and cheesy addition to the genre that I love. Let’s just say like Hathaway and Wilson’s targets, I was conned, too.

Hathaway stars as Josephine, a world-class grifter capable of taking on several personas and accents to facilitate her cons against men who underestimate her because of her looks and seek to bed her. Her scams net her hundreds of thousands of dollars, while Wilson’s Penny spends her time taking a few hundred dollars off her targets. After her latest scam brings police attention, Penny searches for new hunting grounds and unwitting strays into Josephine’s territory. Worried about the attention Penny’s brash approach may bring, Josephine seeks to get rid of her. However, when Penny proves herself a worthy practitioner of the con, Josephine decides to take her under her wing and teach her her methods. Penny chafes under Josephine’s tutelage, and two decide that the south of France isn’t bring enough for the both of them. The two engage in a friendly competition to determine who must leave. Targeting a tech millionaire, whoever swindles him first, wins. Can the student outwit the master?

This movie has been advertised as the female version of Dirty Rotten Scoundrels. Not sure I would categorize it as such, but I did find it to be a funny and clever con movie in the same league as the Oceans movies. In its favor, the plot avoided obvious pitfalls and provided a fresh take on art of the con. Started off strong with a clever scam conducted by Wilson’s character. It was simple in its execution, but believable as it preyed on the vanity and superficial nature of the men she targeted. I have no doubt that such a scam could easily work in the real world. It was conducted with Wilson’s trademark brand of socially awkward comedy. Multiple scams occur throughout the film ranging from simple sleight of hand to the honey trap; the quality of the cons did drop a bit when Hathaway and Wilson began working together on a ridiculous flimflam that was clearly meant to draw laughs more than impress. Though somewhat successful at drawing laughs, it was at the sacrifice of the conning method. Fortunately, the story regained its traction when the two moved into a more adversarial relationship, drawing even more laughs as the two proved to be evenly matched in their manipulations, using each other’s methods against one another. Not to mention a fantastic an eleventh-hour twist that I did not see coming in any way and turned the premise of the film on its head.

Rebel Wilson has had a bit of a surge in recent years, going from a supporting role in the Pitch Perfect films, to become a breakout character for the franchise, into a leading lady of her own romantic comedy that pokes fun at the genre as a whole. It’s been a good year for the Australian actress, and The Hustle is likely to increase her popularity as she holds her own against the A-list Anne Hathaway. The two have a good chemistry together and are able to play off each other masterfully. It is easy to watch them in a master-protégé relationship. The dynamic perfectly mirrors their real lives, with Hathaway as the seasoned professional and Wilson as the wide-eyed newcomer. However, it was even more enjoyable to watch them compete. They both brought something unique and genuine to their characters.

Let’s just say, I am no longer starved for a good con movie. I don’t know if I put The Hustle on the same pedestal as Dirty Rotten Scoundrels, but it is a welcome addition to the genre of con movies. Its unique approach showcasing the way women can manipulate the opposite sex proved that as Hathaway said, “women are suited for the con.” She alleged that women were more suited for it, but that merely proves that women, like men, possess egos. A dangerous thing, as ego is the very thing that con artists prey on. By the way, don’t be in a hurry to leave the theater as the credits roll, or you will miss the stinger. It wasn’t as funny as I hoped, but was a continuation of a scene depicted in the film. In my opinion, some good old-fashioned outtakes would have been great in its place, but don’t worry; the credits aren’t very long, so feel free to judge for yourself.

Jeremy Butler is a film school graduate of the International Academy of Design and Technology. He is been writing for Upcomingdiscs since 2012; however, movies have played a big part of his life for much longer. Favorite genres include horror, science fiction/fantasy, and comedy. Favorite movies are V for Vendetta, Boondocks Saints, Kiss Kiss Bang Bang, and The Godfather.
Level 16 (Blu-ray) Pokemon Detective Pikachu