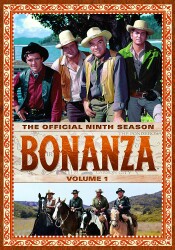 Three-time widower Ben Cartwright (Greene) runs his famous Ponderosa Ranch with the aid of his three grown sons from three different mothers. There’s Little Joe (Landon), Adam (Roberts) and Hoss (Blocker). Set some time in the mid 1800’s, this long-running series followed the family’s many exploits. In the late 1950’s, westerns accounted for six of the top ten programs on TV. Only Gunsmoke had a longer run than Bonanza. From 1959 to 1973, Ben Cartwright and his boys rode across the small screen. Years later in syndication the series re-emerged as Ponderosa, and a handful of TV movies continued the tale into the 90’s.We never have grown tired of the genre that gave us such heroes as John Wayne and Clint Eastwood.

Season 9 introduces us to a new character to finally replace Pernell Roberts as Adam. The second episode of the season is called Sense Of Duty, and it introduces us to the rowdy Candy Canaday, played by David Canary. It took extra time to replace Roberts, because the guy who they had planned to use ended up with his own television series, and while Lost In Space didn’t last nearly as many years as Bonanza did, it’s hard today to think of Guy Williams as any other character even though he started his television career playing Zorro. Who knows what that character would have been like. Canady only stayed for a couple of years, playing the ranch foreman. He would return near the show’s end when the beloved Don Blocker died. Now you get to see his introduction to the series.

The season has other memorable episodes, to be sure. Little Joe gets kidnapped by a disgruntled group of gold-rush immigrants for ransom in The Conquistadors, but the kindhearted folks just might not have it in them to do ol’ Joe any harm. Of course, Candy isn’t with the gang for too long before he ends up in trouble. In Judgment At Olympus he’s framed for murder, and it’s up to Hoss to get him out of the jam. Candy is also in charge of the Cartwright steamboat, so there are new ways to get into a jam on the water. In Showdown At Tahoe a gang of crooks use the boat to escape the law. So it’s the Cartwrights to the rescue. In Justice Deferred, Hoss is afraid he fingered the wrong man for murder when he spots what appears to be the culprit, but after the convicted man is already executed for the crime. The Crime Of Johnny Mule might as well be called 12 Angry Men, because this time it’s Hoss who is the lone holdout on a jury. Ben has to play a little possum when someone attempts to kill him. He makes the killer think he finished the job in the hopes of flushing him out in The Late Ben Cartwright.  To Die In Darkness is the very first directing gig for Michael Landon. It’s a typical revenge plot where Ben and Candy are held hostage in a mineshaft for weeks so that they can see how it feels to be locked up, because Ben’s mistaken testimony is what sent him to prison.

CBS started to pack in some extras in the previous release, but this one goes back to a bare-bones kind of title. There are promos and original ads but very little else in this collection. Again the season is split into two releases. Look for a combo pack and you’ll get all 34 episodes on 8 discs. Do I wish CBS would release them together? Absolutely. But you might put up with it to have these classic shows on your video shelf. “At least that’s what I decided.”

Gino Sassani is a member of the Southeastern Film Critic's Association (SEFCA). He is a film and television critic based in Tampa, Florida. He's also the Senior Editor here at Upcomingdiscs. Gino started reviewing films in the early 1990's as a segment of his local television show Focus. He's an award-winning recording artist for Omega Records. Gino is currently working on his 8th album Merchants & Mercenaries. Gino took over Upcomingdiscs Dec 1, 2008. He works out of a home theater he calls The Reel World. Favorite films: The Godfather, The Godfather Part II, The Body Snatcher (Val Lewton film with Karloff and Lugosi, not the pod people film), Unforgiven, Gladiator, The Lion King, Jaws, Son Of Frankenstein, The Good, The Bad And The Ugly, and Monsters, Inc.
Princess Mononoke Collector’s Edition (Blu-Ray) How to Train Your Dragon: The Hidden World (UHD Blu-ray) (4K)