How to Train Your Dragon: The Hidden World (UHD Blu-ray) (4K) 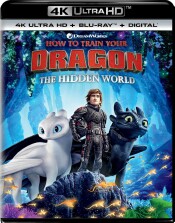 “Legend says that when the ground quakes or lava spews from the earth, it’s the dragons letting us know they’re still here. Waiting for us to figure out how to get along. Yes, the world believes the dragons are gone, if they ever existed at all. But we Berkians, we know otherwise. And we’ll guard this secret until the time comes when dragons can return in peace.”

It is surreal to know less about a subject than your six-year-old daughter, but that was the case going into How to Train Your Dragon: Hidden World. Aside from a knowledge of this franchise’s existence, I knew next to nothing about the films as a whole. My daughter, Nalyce, on the other hand, turned out to be a subject matter expert about the series as well as the television series, apparently. It was quite the role reversal having her explain to me significance of Hiccup and his dragon, Toothless. Also, it gave us something to bond over, which was further expanded upon thanks to the opportunity to take her with me to this screening. For me, I found the film to be a wholesome family experience and a satisfactory conclusion to a well-liked franchise, though I’m sure there remains the opportunity for expansion of the film’s universe. Nalyce was mesmerized by the Hidden World and the different species of dragons. All in all, it was a treat for the whole family.

The film picks up after the events of the previous film with Hiccup embracing his role as the chief of Berk and its citizens. Along with his Night Fury dragon Toothless, and aided by his closest companion, he has taken whole the mission of liberating captured dragons from poachers. Though his actions are noble, this mission is creating a strain on Berk, as it is resulting in overcrowding, as well as depleting their resources. Seeking a solution to this issue, Hiccup recalls a tale his father told him as a boy about a hidden world where all dragons originate from. He becomes determined to find his world so that his people and their dragons can live in harmony away from the threat of poachers.

Meanwhile, growing tired of the Berk’s continuous interference in their operations, the poachers recruit legendary dragon hunter Grimmel the Grisly to capture Toothless in order to use his power as Alpha of Dragons to their advantage. Grimmel is a sinister man, with the reputation for killing all Night Furies. Toothless’ existence challenges this reputation, prompting swift action his part. Speaking of Toothless, the discovery of another one of his kind, a Light Fury, and their courtship begins to pull him away from best bud Hiccup.

Coming into this with fresh eyes, this is a cute series. I am not the target audience, but I still enjoyed myself immensely. The characters are lively and hilarious, especially TJ Miller, who pulls double duty as twins Roughnut and Toughnut. Jay Baruchel’s Hiccup and America Ferrera’s Astrid are #relationship goals; I know, I hate myself for doing that, but it is fitting. The pair are what drive the story forward as Astrid is Hiccup’s rock, supporting him his crazy plan but also offering guidance, which provides him with confidence that he is lacking. More on Roughnut and Toughnut, who are the two scene-stealers of the film, as Miller’s unique brand of comedy shines through when Toughnut provides Hiccup with relationship advice, or when Roughnut talks the bad guy’s ear off; I instantly recognized his voice.

When it comes to Nalyce, this film got her stamp of approval in spades. She was already a fan coming in, and this third installment into her beloved series did nothing but reinforce that. Periodically I would look over at her and she was totally wrapped up in the story, leaning forward in her seat. If only we could get that kind of response at home. According to her, it was the hidden world that she loved most; she loved the colors of it and the idea of a world where dragons lived in harmony. I asked her what she was going to watch now that the movies were done; that conversation didn’t go over so well. I guess I should have eased her into that news.

How To Train Your Dragon 3: The Hidden World  is presented in its original aspect ratio of 2.35:1. The ultra-high-definition 2160p  image is arrived at by an HEVC codec with an impressive average bitrate of 50 mbps. Surprisingly for an animated feature for the kids, the high-definition image presentation is often a dark pale. Black levels are fortunately good and allow nice shadow definition. That’s huge, because the main dragon character is jet black. Yet we can see him clearly in even the darkest of circumstances. There’s also the chance to show off the nice HDR contrast, because we have a very black dragon in love with a very white dragon, and when they are together the contrast is rather striking, not in the dragons themselves, but the clean lines that separate the extremes. HDR is at its best with fire elements that reveal wonderful bright plumes of bright oranges and reds. There are some establishing shots of the dragon sanctuary which displays a rainbow of vivid colors from the homes, dragons, and fancy costumes. There’s a lot of detail to be enjoyed for something that is upconverted here from its original 2.3K production.

The Atmos track defaults to a pretty active 7.1 mix. It all starts with the many sounds of the collection of dragons. From roars to bellows of fire, they can dominate an audio presentation pretty quickly. The score can be rousing, and there’s plenty of crumbling structures and massive explosions caused by the dragon fire. That’s where the subs dominate and you get the most immersive experience in the film. Dialog cuts through, and you get rather sharp audio definition that allows you to enjoy it all. The surrounds aren’t as aggressive as you might expect; they generally provide just the slightest hint of space and nuances of environments.

The extras are both copies of the film. On the UHD disc they are 4K but no HDR.

This is quite possibly the most extras that I’ve seen with one disc. It’s a bit of an overload. My favorites were the How To Voice Your Viking, How I Learned From Dragons, Growing Up With Dragons, and Epic Villain.

Alternative Opening: (03:19) This feature includes an optional intro from writer/director Dean DeBlois. It is shown in strictly storyboard format with voice acting from Jay Barachuel.

Deleted Scenes: (09:15) This also includes the same optional intro. It is five scenes in total that were clearly cut at different stages of development, as some are in storyboard format while others are in 3D animation.

How to Voice your Viking: (01:33) Curious as to who voiced your favorite characters? Take a peek behind the curtain with this featurette.

Creating an Epic Dragon Tale: (04:25) A behind-the-scenes featurette with Dean DeBlois and the production team discussing the importance of crafting an epic story to conclude the franchise.

How I learned from Dragons: (03:42) The cast’s opportunity to talk about their decade-long experience playing the characters that brought the popular franchise to life and explain what they will be taking away from the series.

Brave Wilderness Presents Nature + Dragons =Awesome: (07:52) a rather lengthy featurette depicting the collaboration between How to Train your Dragon producers and Brave Wilderness to add authenticity to the physicality of the animation of the dragons.

The Dragon Sheep Chronicles: (02:35) Two comical featurettes that would have served as good promotion for the films regarding the risk sheep face when dragons are around.

Deck of Dragons: (03:29) Froglegs gives an intro and biographical data to four new species of dragons that appear in this latest installment.

Growing up with Dragons: (03:34) A look back at Hiccup’s journey and evolution over three movies and his companionship with Toothless.

The Evolution Character Designs of Dragons: (03:18) Essentially the same as the Growing Up With Dragons featurette, just from the graphic design angle.

Drawing Dragons: (03:09) An in-depth look at the creation of every species of dragons, including the newly featured Light Fury.

Epic Villian: (01:44) F. Abraham Murray provides the voice for a deserving villain who will give Hiccup a run for his money.

Astrid’s Whole Dragon Trilogy in 60 seconds: A look at the character of Astrid and her contribution to all three films. I caution watchers from watching this before the movie, as spoilers are included.

New Berk: (02:13) Hiccup gives the rundown about the Vikings’ new home. A spoiler is in effect for this featurette as well.

As I mentioned earlier, this film was a great sendoff for the franchise, as it provides the audience with ample closure. There remains potential to expand on the franchise, maybe even a spinoff with my favorite twins, but as of right now, I walked away feeling that How to Train Your Dragon is a family-friendly experience that I’m glad I was able to share with my family.

Jeremy Butler is a film school graduate of the International Academy of Design and Technology. He is been writing for Upcomingdiscs since 2012; however, movies have played a big part of his life for much longer. Favorite genres include horror, science fiction/fantasy, and comedy. Favorite movies are V for Vendetta, Boondocks Saints, Kiss Kiss Bang Bang, and The Godfather.
Bonanza: The Official Ninth Season John Wick 3: Parabellum