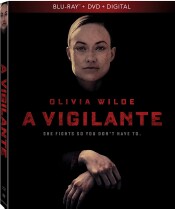 This is Oliva Wilde like you haven’t seen her before. Not only is she expanding in the world of screenwriting, but she sheds her previous typecasting as a vixen or seductress, becoming nearly unrecognizable. A Vigilante tackles the very large issue of domestic abuse, pulling back the curtain and showing the immense devastation that such acts leaves on the victim. Not only physically, but emotionally as well. It also shows empowerment, as Wilde embodies the role of Sadie, a woman who suffered horrific scars and devasting loss at the hands of the man who is supposed to love and protect her, her husband. Instead of letting what she has endured destroy her, she goes on the hunt, training in martial arts and learning to cover her tracks in order to fight for those who are unable to fight for themselves. The intensity in this film is palpable, and though there is not as much action or violence as I was expecting, this was one of the most powerful pieces of cinema that I have seen this year.

As I previously mentioned, Wilde plays Sadie, and when we meet her, she is preparing to encounter her next target. She changes her appearance to look frail and older, lulling her prey into a false sense of security. This is to her advantage, as when it comes to fighting, the element of surprise can make all the difference. Instead of killing the man, she forces him to sign over a hefty chunk of change to the victim of his abuse (i.e. his wife) and runs him out of town. It is clear that this man is not her first target, as she is very methodical and controlled. This opening sequence is rife with tension and drew me deeper into this world. This was a surprise for me, as I only saw the aftermath of what she did to him. My initial thoughts were that I felt cheated, but with more time to digest the film, I realized that this actually played better. By only showing me the aftermath, I was forced to use my imagination regarding the ordeal the man was forced to face. Based on what was left of his face, it’s very clear that he did not get off easy.

As the story continues, it becomes very clear that Sadie is a complex character with many different layers. On the one hand, when dealing with abusers and victims of abuse, she is very controlled and soft-spoken. However, when alone, it is clear that she is still crippled by her own history of abuse and what it cost her. I give a great deal of credit to Olivia Wilde for flawlessly illustrating a multi-dimensional character.  Watching her hyperventilate in the hotel and frantically remove her clothes, revealing the many scars that covered her body, brought realism to the importance of the subject matter, showing again that abuse is not just physical, but emotional as well. There have been other films that have taking on this subject like Enough, and there was even an episode of The Blacklist that featured a vigilante acting on the behalf of victims, but this film in my opinion is in an arena all its own. There are some elements that were fairly predictable such as the inevitable confrontation of her past and its subsequent outcome, but the way the film lays it all out is enough to make you look past that predictability.

The one caveat I do have is that it was not abundantly clear that there were two separate time periods occurring simultaneously at first. Initially I was under the impression that the main character was attending support groups in order to overcome the crippling panic attacks that had previously been shown. Though this fact was cleared up in the latter half of the film, it made for some character confusion early on. Despite this, the origin storyline is pivotal for the other storyline and the character’s motivations. After digesting it afterwards, I must admit that the timing of the reveal was also for the best.

This film absolutely goes into my top films of 2019 category, possibly my favorite indie of the year. Not only was Olivia Wilde’s performance everything I expected it to be and more; the fact that she actually wrote the screenplay makes this cinematic accomplishment even more impressive. Her willingness to confront the realism of the subject is the film’s largest draw. I came into this film expecting to watch her beating guys to a pulp, but her more subtle approach was the better way to go.

Jeremy Butler is a film school graduate of the International Academy of Design and Technology. He is been writing for Upcomingdiscs since 2012; however, movies have played a big part of his life for much longer. Favorite genres include horror, science fiction/fantasy, and comedy. Favorite movies are V for Vendetta, Boondocks Saints, Kiss Kiss Bang Bang, and The Godfather.
13 Hours: The Secret Soldiers of Benghazi (UHD Blu-ray) (4K) Tom Clancy’s Jack Ryan – Season One (Blu-ray)