Posted in: Disc Reviews by Gino Sassani on June 5th, 2019 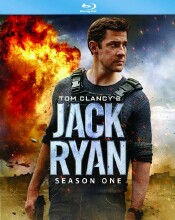 Witness the birth of — actually make that rebirth of –one of the most popular action heroes in literature. Tom Clancy’s Jack Ryan has been a character of many jobs and many faces over the years. Baldwin, Ford, Pine, and Affleck have all stepped into the role of the man who has been a soldier, an analyst, an operative, and a president. What might appear as a clear advantage for this Amazon Prime streaming television show can be just as much a liability. When you throw in the Tom Clancy novels, comic books, and fan fiction, there is a ton of Jack Ryan history that pretty much gives us a story arc from his humble beginnings to extraordinary exploits and wearing the face of a few good performers. It’s a tall order for the series and perhaps an even taller order for actor John Krasinski, who has created a nice little horror franchise with wife Emily Blunt on the side. I don’t really have the time or energy to watch streaming shows and films. There’s always a backlog here of discs that need to be , and I’ve created a rather comfortable viewing experience with my home theatre I call The Reel World. Our motto: Here there be monsters. So I have not had the opportunity to check out this show even though I’ve heard pretty solid things from my colleagues. Thanks to Paramount’s production of the series and their release of the first season on Blu-ray, I’ve finally had my chance to see what all the talk’s been about. Let’s just say, I get it.

This series obviously has to update the character from his 1980’s Cold War novel beginnings just as a couple of the films have had to. It’s the current year, and Jack Ryan (Krasinski) is really just an analyst for the CIA. He checks financial transactions and has come upon some serious activity. He believes he has stumbled onto the biggest terrorist activity since 9/11. Now he has to convince his new team commander, James Greer, played by The Wire’s own Bunk Wendell Pierce. Greer has recently been demoted, and his new post is really something of a censure for him, so he’s not as receptive to Ryan’s enthusiasm. It doesn’t help that their first inadvertent meeting occurred on the streets with a bit of a near crash. Ryan goes over his head to freeze some bank accounts, and the resulting investigation puts the two uneasy coworkers in the field on the trail of a huge asset.

What we get over the course of eight episodes is the typical cat-and-mouse kind of operation. But what isn’t so typical is how the show approaches that familiar story and investigation. We spend just as much time with the target, a man named Suleiman, played by Ali Suliman (not sure of the significance of actor/character spelling differences). Seldom has a film or series taken us so in-depth to the “bad” guy’s world or life. We learn that he and his brother were survivors of an earlier conflict and that it changed the trajectory of his life toward the radicalized world of the terrorist. We meet his family. His wife Hanin (Shihabi) is trying to leave him with their children, but he controls them with an iron hand. When she finally does find a way out, the son refuses to join his mother and sisters and runs to warn his father. This whole dynamic takes us deep inside of gender roles in this world and how new generations of both men and women find the paths that they must follow. One of the best parts of this series is how real they make this connection in both worlds. “Bad” guys are much more powerful when we understand exactly where it all comes from in both the culture and circumstances of their experiences. I can’t say enough just how compelling the two stories become.

We also get another look at the origin, of sorts, of this next Jack Ryan. We get to eavesdrop as he starts to court his future wife Cathy, played by Abbie Cornish. That story also provides some background without having to take a lot of time to establish it all. Cathy is the daughter of an old Wall Street boss of Ryan’s. We meet him only briefly when he tries to get some inside trader info from Ryan because of his new government information. It’s a small scene that doesn’t take more than a few minutes, but it cleverly sets up the financial world background that Ryan gave up to serve his country while also giving us the introduction we need to quickly get to the woman we know he’s going to marry. The writers on this show are brilliant at this kind of thing. In just eight short episodes, you’ll be amazed at how much story you end up getting. That also means you have to pay attention. This isn’t the kind of series you put on in the background. You miss three minutes and you’ve missed a big chunk of the story going forward. I can’t imagine anyone watching this on a cell phone screen. These Blu-rays are the way to go.

The stakes are equally high. These guys have plotted biological attacks at various points in the country, and Ryan and Greer have to work together with various international assets to beat the ticking clock. I was very compelled by the course of the Ryan/Greer relationship. We know how close they will become, and both Krasinski and Pierce do a nice job of allowing that relationship to evolve slowly. The nuances of the performances and the rather instant chemistry of the actors allow you to observe how it all comes together. You won’t be able to pick a single moment and say that’s where it is. That’s a shortcut for lesser storytellers. It happens so gradually that you notice the start and end points in the series and feel like it got there organically. The show is extremely well done and deserves to be seen in this enhanced form.

is presented in its original streaming aspect ratio of 1.78:1. The 1080p image is arrived at with an AVC MPEG-4 codec. It’s hard for me to imagine that people are watching this on their mobile devices. It certainly wasn’t filmed with that kind of presentation in mind. It would be easy to even live up to just broadcast standards, but this image presentation is much better than that. The detail here rivals anything I’ve seen on television. Production design here is up to box office film standards. Black levels are inky and deep with plenty of nice shadow definition. Some of the Syrian and other international establishment shots are like a beautiful travelogue. I don’t know what it looked like on your phone, but wait until you see it on a large screen.

The Dolby TrueHD 7.1 track was another wonderful surprise. Some of you heard this through half-inch speakers. Are you in for a treat here. This goes above and beyond your typical television audio presentation. Surrounds are live with chatter an immersive ear candy. The action scenes surround you in an inescapable wall of sound. Subs are like nothing television usually has to offer. I bet your phone didn’t shake a room like this presentation does. The dialog always comes through cleanly. But again, it’s the subs and surrounds that truly astound here.

Only some deleted scenes.

While there is plenty of action to be found here, the series doesn’t depend on constant explosions or gunfights to keep your interest. You’ll stay engaged because the material is too engaging to look away. You also won’t drop your focus, because you know you’re going to miss something huge if you do. The cast is quite good, and the stories don’t let up even if something isn’t blowing up every five minutes. There’s also a great deal of promise going forward. The final episode teases some very exciting possibilities for the next season and beyond. I think this is the kind of show that will only get better as the story moves forward. The showrunners trust the audience to get it even if they are doing so on a three-inch screen. Some shows can’t quite pull the trigger on where they are going. That’s not true with Tom Clancy’s Jack Ryan. They understand that, “If you pull your weapon to shoot, you shoot.”

Gino Sassani is a member of the Southeastern Film Critic's Association (SEFCA). He is a film and television critic based in Tampa, Florida. He's also the Senior Editor here at Upcomingdiscs. Gino started reviewing films in the early 1990's as a segment of his local television show Focus. He's an award-winning recording artist for Omega Records. Gino is currently working on his 8th album Merchants & Mercenaries. Gino took over Upcomingdiscs Dec 1, 2008. He works out of a home theater he calls The Reel World. Favorite films: The Godfather, The Godfather Part II, The Body Snatcher (Val Lewton film with Karloff and Lugosi, not the pod people film), Unforgiven, Gladiator, The Lion King, Jaws, Son Of Frankenstein, The Good, The Bad And The Ugly, and Monsters, Inc.
A Vigilante (Blu-ray) JT LeRoy