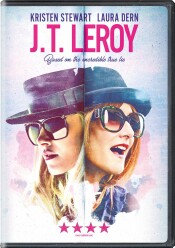 When it is revealed that a person who has touched the lives of many people turns out to be a fraud, what impact does that have on the people who were inspired? That is something that addressed in the semi-biographical film, J.T. Leroy. Kristen Stewart and Laura Dern star as Leroy and Laura Albert respectively. Albert is the true artist behind three best-selling novels, and Leroy is actually nothing more than a literary persona that she created. I know what you are thinking. If J.T. Leroy is not real, who is Stewart playing? That is one of the things that make this film so interesting. In order to sell the persona that she has been advertising for years, Albert convinces her sister-in-law to pose as Leroy in public. I’m not sure how getting a younger woman to go out in public posing as a boy fixes the problem, but as it turns out it worked for a period of time, as it is based on a true story where that is exactly what happened.

Laura Albert is an aging writier, who by her own omission spent her twenties waiting to be discovered. She has a unique voice and intriguing stories to share, but it is only after she takes on the persona of a fictional young man she names J.T. Leroy that her books get the attention that she craves. This goes on for years with the success of the novel, but she is forced to keep a low profile, only able to conduct phone interviews in order to keep her secret from being exposed. However, the demand from the public to see Leroy is ever growing, and the chances of Albert being able to keep up the façade as it is are dropping.

Enter her sister in-law, Savannah Knoop. At Albert’s insistence, Knoop begins making public appearances as Leroy due to her likeness to the photo Albert has been passing off as Leroy. Initially, Knoop is along for the ride, taking on the persona and conducting interviews. After providing the public with the face of their inspiration, J.T.’s popularity grows. As expected, the spotlight as a way of changing people, breeding contempt and resentment as keep the lie begins to damage the relationship between the two characters and case identity issues for both parties involved.

So an interesting aspect of the film is that is intercut with audio voice-overs that I assume are taken from actually interviews conducted with Albert under the guise of Leroy. The inclusion of this materials brings about some authenticity to the film. Yes, the fact that the film is based on a true story establishes that too, but listening to the archival footage is the supporting documentation that proves that point. In reality the based-on-a-true-story tagline is not the definitive marker for a biography, as more often than not many details are sensationalized for the sake of selling it to an audience. Because of this knowledge, I have become a bit skeptical when it comes to biographical or semi-biographical. The addition of the voice-over made it easier to accept everything else, especially after conducting my own independent research and seeing that the film mirrors the real story pretty well, particularly the method by which the truth of the hoax was exposed.

So, it has taken several years and many transformative roles, but Twilight is not the first thing that comes to mind anymore when I see Kristen Stewart. Stewart has become an indie darling, and this film adds to her acclaim as the woman who spent six years posing as the infamous writer. Stewart brings a level head to the role, which is very complementary to the shy and timid nature that is supposed to be the literary figment’s personality. Not to mention the duality of her role as both Savannah and J.T.; the emotional toll of being two different people comes to a head when the truth finally comes out. Dern helps balances things out with her over-the-top nature, as she drives the story forward with her craving the spotlight by proxy. The two women have a good chemistry together, likely due to the fact that this is not the first time they have collaborated (the other time being Certain Woman).

Sexuality is a large component of the film, as it deals with both heterosexual and same-sex relationships, something that I assume to be a recent addition given the present political climate. In the film these matters are very much in the public eye; given that these events occurred in the 1990’s, I was not expecting it to be so much in the forefront. To its credit, this addition allows the characters to stand out more and does add tension to Savannah’s double life as she attempts to balance her own desires and those of J.T.’s.

The film’s ending was a bit anticlimactic in my opinion. I would have like to have seen more of the fallout from the hoax being exposed. That aside, I found the film to be very enjoyable and informative. I was able to learn about a huge literary scandal that took place in the years before I discovered the written word. I am disappointed in myself that I knew nothing about this subject until this DVD, but I am very grateful for what I have learned.

Jeremy Butler is a film school graduate of the International Academy of Design and Technology. He is been writing for Upcomingdiscs since 2012; however, movies have played a big part of his life for much longer. Favorite genres include horror, science fiction/fantasy, and comedy. Favorite movies are V for Vendetta, Boondocks Saints, Kiss Kiss Bang Bang, and The Godfather.
Tom Clancy’s Jack Ryan – Season One (Blu-ray) A Star is Born: Encore Edition (Blu-ray)