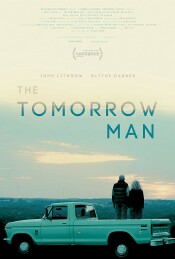 “All you have to do is learn to connect the dots and get ready.”

Noble Lincoln Jones hasn’t had any real feature experience in the director’s chair. He’s notable for some rather well-known country music videos, and now he’s made the jump to the feature film world. It shouldn’t come as any complete surprise that his first effort would be a rather small-budget independent film like The Tomorrow Man. The movie offers a pretty simple premise with a limited cast, so there aren’t a lot of moving parts here. It’s the kind of playground where a young filmmaker gets to show us what kind of a storyteller he is without the grand distractions of a seasonal anchor film and all of the trimmings that entails. Can he take a small amount of money and show an audience that they’re in good hands? Jones passes most of these tests, and for most of the 90-plus minutes he enthralls us with clever characters and superb acting. How many more resources do you need if you have John Lithgow, arguably at the peak of his skills, and Blythe Danner, who has thrived on this kind of independent project? The Tomorrow Man makes the case that these two actors are pretty much all that you need if a director can avoid falling temptation to some silly plot device or curveball that might lesson all of the good faith he might have earned for most of the film. Ooops.

“You have no idea how screwed up the world would be if not for ball bearings.”

Meet Ed, played by John Lithgow. He’s a retired representative from a ball bearing company. He’s a bit estranged from a son who doesn’t really know him. No one really knows him. He goes to the grocery store pretty much every day and pays with checks. Even with a pretty good retirement, he has to ration his medications. Why can’t he afford them? And why doesn’t his son really understand him? You see, Ed is hiding a huge secret. There’s a hidden exterior door to his house which opens through a clever magnetic trick. It leads to his hedge against an uncertain future. You see, Ed is a survivalist  and he’s using his daily grocery trips to quietly stock up on all the things he’ll need when disaster strikes. But he’s a lonely man who thinks he might have finally found the woman for him when he spies Ronnie also making frequent trips and paying with cash. Ronnie is played by Blythe Danner, and she’s extremely shy and quiet. Ed thinks she’s hiding the same secret and sets himself up to “accidentally” encounter her enough times to get up the nerve to ask her out. They end up having an awkward but nice time together until Ed discovers that Ronnie is hiding a different kind of secret. She’s a compulsive shopper and a hoarder. When he’s finally invited into her home he realizes his mistake  but instead of running genuinely attempts to help her overcome her issue until he finally realizes that he has one as well. It’s a wonderfully compelling relationship between two people who are far from perfect and restrained by their own stubbornness. The truly beautiful part is how they navigate their way together, propelled from two wonderfully nuanced performances. The characters have instant chemistry, and you find yourself quickly caring about them both. It’s a likely last chance for both of them of having a companion.

Everything about this film appears to be nearly flawless. It’s such a remarkable job by a first-time director. He’s smart enough to get out of the way of the performances and keeps the story lean. There isn’t a lot of non-essential stuff here to distract from the emotional story the actors are providing so well. Yes, there are flaws. I thought we spent too much time in Ed’s world and not quite enough time in Ronnie’s. The title appears to provide the reason for the imbalance, but I still wanted to see a little more of her world. I was OK with that, however, and Jones had me completely. That’s when it happened. It was sudden. Unexpected. It came from out of nowhere.

It’s that last little bit of showboating that can cost you the prize. You’ve seen it happen in a close football game where a ball-runner reaches out with the ball just before he crosses the goal line. He’s about to cross into the end zone untouched, but that last minute taunt finds him dropping the ball and losing the score. That’s exactly what Jones does with the final frames of his first movie. I was totally enthralled with his little film. I was a mere minute or so from leaving the screening impressed and feeling very good about what I saw. It was a walk-in score. But he had to do it. He had to hold the ball out just before he scored. If only he could take back those last few frames. If only I could pretend I hadn’t seen them. But I did, and so will you. And it will taint what should have been a great film. Noble, what in the world were you thinking? You’ll tell me I just didn’t get it. It’s the standard answer here. But I was getting it. You just made a beautiful film. I loved it until the second I didn’t. “You can’t see it, can you?”

Gino Sassani is a member of the Southeastern Film Critic's Association (SEFCA). He is a film and television critic based in Tampa, Florida. He's also the Senior Editor here at Upcomingdiscs. Gino started reviewing films in the early 1990's as a segment of his local television show Focus. He's an award-winning recording artist for Omega Records. Gino is currently working on his 8th album Merchants & Mercenaries. Gino took over Upcomingdiscs Dec 1, 2008. He works out of a home theater he calls The Reel World. Favorite films: The Godfather, The Godfather Part II, The Body Snatcher (Val Lewton film with Karloff and Lugosi, not the pod people film), Unforgiven, Gladiator, The Lion King, Jaws, Son Of Frankenstein, The Good, The Bad And The Ugly, and Monsters, Inc.
Lost In Space: Season 1 (2018) X-Men: Dark Phoenix