Posted in: The Reel World by Jeremy Butler on June 9th, 2019 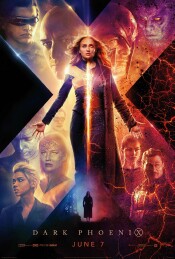 “The mind is a fragile thing. Takes only the slightest tap to tip it in the wrong direction.”

The simple reality is that this franchise should have ended with Days of Future Past. That would have been a good point to call it quits; it had a good resolution and all, but the chasing of additional box office revenue has forced us to have to endure two more mediocre additions to the franchise. Though Dark Phoenix is better than Apocalypse, and it is a better telling of the Dark Phoenix Marvel Storyline, Fox’s second bite at the apple is still not the film that I hoped it would be. Fortunately, with Marvel recovering the property we are undoubtedly due for another reboot, and perhaps the third time will be the charm.

Picking up after the events of Apocalypse, the X-Men have become a national treasure, widely considered to be the world’s first line of defense. It would seem that Charles Xavier’s dream of mutant unification is within reach. However, the realization of his dream comes at a cost of those closest to him. Matters come to a head during a questionable mission to rescue astronauts following a failed space exploration. With a solar flare closing in, the team pushes themselves too far, resulting in Jean Grey taking the full force of the cosmic energy.

Miraculously, Jean survives the exposure, but there are side effects. In addition to a monumental boost in her powers, long buried secrets come rushing to the surface, secrets that will divide the team and have devasting ramifications as the X-Men must face their most dangerous foe yet: one of their own.

As I said earlier, this is not the worst one in the franchise (cough…cough Apocalypse), but there is nothing to make the film stand out. Promos ruined the film’s best opportunity for shock value by spoiling the death of a beloved character. For me this was the film’s biggest failing. It could have changed my opinion of the film without question. It also didn’t help that the film introduced a brand new race of creatures without taking the proper time to provide an adequate backstory or explanation of their abilities. Near as I can tell, the suckers were just hard to kill. Not to mention there was one thing that Chastain’s character could do that I definitely needed more information to understand. Perhaps diehard comic book fans know what it is, but I imagine that those who not as well versed will find themselves as confused as I was.

Sadly, there were some elements and themes that I liked that if more fleshed out could have greatly improved the movie overall. For example, the division between Raven and Xavier. Now, these two being on separate sides of an issue is nothing new, but this time around I found myself more inclined to side with Raven. Their confrontation was a high point for the film, albeit brief. I would have like to have seen more scenes between Scott and Jean. I mean, their love affair is one of the biggest themes of the franchise, and yet it was confined to like three or four scenes of the whole film. I expected there to be more longing and emotion. By the time we meet them, it is clear that that they have been in a committed relationship for some time, but what stage they are in is unclear. Not to mention the representation of the other characters is little more than window dressing; it’s still the Charles and Erik show. I admit that they perform their roles well despite the fact that I’m getting whiplash by the number of times Fassbender’s character has switched sides over the course of four movies. It was just time for McAvoy and Fassbender to take a back seat and hand over the reins to the younger generation. Why put together such an impressive group of young actors if their roles are going to be so minimal? I hope they get more representation in the extended cut that I sure is not that far behind.

Jean’s descent into darkness was too quick for me. There should have been more of an internal struggle, especially after what happened with Raven. Despite the emotional toll the character was dealt, her 180 into hurting people was too abrupt for my liking. Xavier tried to offer some semblance of a justification via my opening quote, but for me the significance of the reveal did not match up with the complete breakdown of character’s values and morals. Sophie Turner’s rendition of the character is inspired; I just wish she was giving more to work with. If they were going to have her go full sociopath, they should have had her display more of a psychotic break, maybe even a split personality. Hell, McAvoy could have given her tips on how it’s done.

The lack of a stinger signifies the end of the franchise as far as Fox is concerned. The MCU reacquiring the series just ensures that we may be seeing a new X-Men as early as Phase 4, but more likely Phase 5. Well, Fox has had some ups and downs with X-Men, and this is truly the end of an era. I’m not sure this is the note they wanted to go out on. Though Dark Phoenix is all but guaranteed to be the box office winner, when it comes to cultural significance it’s nothing to boast about. More than a whimper conclusion instead of a bang. Just proof that the studio was determined to get every dollar they could out of the franchise.

Jeremy Butler is a film school graduate of the International Academy of Design and Technology. He is been writing for Upcomingdiscs since 2012; however, movies have played a big part of his life for much longer. Favorite genres include horror, science fiction/fantasy, and comedy. Favorite movies are V for Vendetta, Boondocks Saints, Kiss Kiss Bang Bang, and The Godfather.
The Tomorrow Man The Secret Life of Pets 2