Sinatra in Palm Springs: The Place He Called Home (Blu-ray) 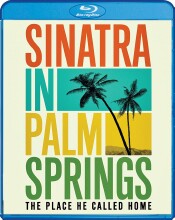 That’s not exactly true. Since the 1950’s, the small town of Palm Springs has been home to many celebrities looking to escape the bustle of Hollywood, yet remain close enough to work there. It was 1947 when Jimmy Van Heusen introduced Frank to the desert community, and he fell in love with the town. His own home was built in time for his wedding to Ava Gardner, and while that relationship lasted only seven years, Sinatra’s relationship with Palm Springs lasted 50 years. He was the best advertisement a town could have. In 1954 he built the massive Rancho Mirage and invited all of his close friends to join him. Many built homes of their own, but there was always plenty of room at Frank’s place. He had several complete guest houses, each built in the size and luxury that Frank’s kind of friend expected. They were named after his famous songs, with the largest being New York, New York. The compound was Frank’s home and playground. In 1976 Frank married his last partner in Barbara Marx, and they lived in the compound until Frank started to fall ill in 1995. Sinatra In Palm Springs tells the wonderful story of Frank’s 50-year love affair with his desert town.

The documentary takes us to the locations where Frank spent his time. We get to go into the clubs and restaurants where Frank entertained his guests, and we sit at the tables that were often reserved just for him and his entourage. Many of these business owners are still around, and they tell us some of the more obscure stories of Frank’s visits. If you owned a club in Palm Springs, you weren’t anything until Frank came calling, and we here one of these owners talk about his first highly anticipated visit from The Chairman of the Board.

It’s not just the local business owners we hear from. The filmmakers were fortunate to be able to talk to Barbara just before her death in 2017. Her stories are the intimate anecdotes about what it was like to be a part of the Sinatra scene in Palm Springs. Many other surviving friends tell similar tales of the glory days in Palm Springs with Frank Sinatra. One of his more frequent guests was Trini Lopez, who tells some compelling stories. These aren’t the typical scripted or well-thought-out lines. These stories are told in a natural way that required patience and care when they made their way to the editing room. Often interview stories are edited too tightly for time or pacing in too many documentaries. Here the editors allowed the subjects to talk at their own pace and in their own style. That was the biggest takeaway for me. Because they were allowed to talk complete with pauses and inflection, you feel like you are there listening to them tell these tales. You get a feel for the style of each individual teller, and most important, get a more genuine look at Sinatra from the eyes of someone he cared about.

Celebrities and friends weren’t the only things Sinatra cared about in Palm Springs. We learn that he was an extremely generous man and would make a routine of reading the paper in the morning looking for stories of local hardship. He would then act to help the person or persons in need. At no point did he allow his name to be used or talk to the press about his good deeds. It’s a side of Sinatra that is seldom seen.

The film is loaded with vintage photographs from the era along with modern looks at the same places. It appears the compound has little changed since Sinatra’s days, and many of the clubs and businesses that are still in town haven’t really changed much at all. A sink in one of the bathrooms still retains the crack from a Sinatra temper tantrum. He threw a champagne bottle across the room, and it cracked the sink’s basin. It still stands unrepaired. He allowed his compound to be used in films starting with Joan Crawford’s The Damned Don’t Cry In Rio. The locations were also used in some of Frank’s films, and we get to see film footage compared with photographs of the places now.

When the desert got too hot, Frank had his mountain retreat, Villa Maggio. It wasn’t very far from the compound, but being in the mountains the temperature was often as much as 20 degrees cooler. He had a helicopter pad built there so that he and his friends could get in and out easily. From all accounts here, Frank was a tremendous host, and it will make you wish you could have been one of those guests.

I have been a fan of Sinatra since I was a kid. He was The Beatles before The Beatles were The Beatles. His voice would make women swoon and men want to be him. He romanced some of the most beautiful women in Hollywood history, and he sat at tables with kings, princesses, and presidents. He was The Voice. The Chairman of the Board. He was Old Blue Eyes. His name was Francis Albert Sinatra, but we all called him Frank. This documentary introduces you to a different man than we knew on the stage. This was the Sinatra we all wish we could have been or at least met. Shout Factory makes that slightly possible with this release, so pick up a copy and “Come fly with me.”

Gino Sassani is a member of the Southeastern Film Critic's Association (SEFCA). He is a film and television critic based in Tampa, Florida. He's also the Senior Editor here at Upcomingdiscs. Gino started reviewing films in the early 1990's as a segment of his local television show Focus. He's an award-winning recording artist for Omega Records. Gino is currently working on his 8th album Merchants & Mercenaries. Gino took over Upcomingdiscs Dec 1, 2008. He works out of a home theater he calls The Reel World. Favorite films: The Godfather, The Godfather Part II, The Body Snatcher (Val Lewton film with Karloff and Lugosi, not the pod people film), Unforgiven, Gladiator, The Lion King, Jaws, Son Of Frankenstein, The Good, The Bad And The Ugly, and Monsters, Inc.
Preview Of The Brady Bunch 30th Anniversary TV & Movie Collection Batman 4 Film Collection (UHD Blu-ray) (4K)