Posted in: Release Announcements by Gino Sassani on June 9th, 2019 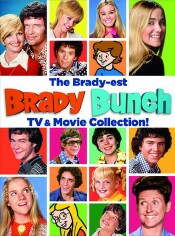 “…One day when the lady met this fellow, and they knew that it was much more than a hunch
That’s this group must somehow form a family. That’s the way we all became the Brady Bunch.”

Has it really been 50 years? Nothing make me feel as old as when a film or television show I watched as a kid celebrates some grand anniversary milestone. It’s like birthdays without the ice cream cake. On September 26th, The Brady Bunch will celebrate its 50th anniversary, and the folks at Paramount/CBS have given yours truly a little homework to do before that date hits. We’re talking about The Brady Bunch 50th Anniversary TV & Movie Collection. They call it the Bradiest collection ever, and that’s no exaggeration. The 31-disc collection features just about anything that was ever associated with the name Brady. I’m surprised there isn’t a complete collection of New England Patriot games for the last decade or so. What you will get is pretty impressive:

You get all five seasons of the original television itself with some commentaries by creator Sherwood Schwartz himself as well as members of the Brady clan. There’s the 22 episodes of the animated show The Brady Kids. Their pop group travels the world with a magical bird and a couple of cute young pandas. The Bradys featured Robert Reed and Florence Henderson dealing with a bunch that is grown with kids of their own. It happened in 1990 and sadly saw only five episodes. But you get them all here. The set includes The Brady Brides, which aired in 1981 and followed the married lives of Jan (Plumb) and Marcia (McCormick), who decide to have their families live together. It ran only seven episodes. Both of these shows have pretty much been lost to time until now.

You also get all five Brady Bunch films, which includes films by the original cast (A Very Brady Christmas), the reboot films staring Shelly Long and Gary Cole (The Brady Bunch Movie, A Very Brady Sequel, and The Brady Bunch In The White House) and the recent release based on the book co-written by Barry Williams (Greg) and starring Big Bang Theory’s Kaley Cuoco and The O. C.‘s Adam Brody, called Growing Up Brady. Man, that’s a ton of Brady. I’d love to tell you more, and that’s exactly what I’m going to do, but I’ve got to put in some overtime in The Reel World, my home theatre. See you guys around September 26th. We’re going to get Brady Excited around these parts.

Gino Sassani is a member of the Southeastern Film Critic's Association (SEFCA). He is a film and television critic based in Tampa, Florida. He's also the Senior Editor here at Upcomingdiscs. Gino started reviewing films in the early 1990's as a segment of his local television show Focus. He's an award-winning recording artist for Omega Records. Gino is currently working on his 8th album Merchants & Mercenaries. Gino took over Upcomingdiscs Dec 1, 2008. He works out of a home theater he calls The Reel World. Favorite films: The Godfather, The Godfather Part II, The Body Snatcher (Val Lewton film with Karloff and Lugosi, not the pod people film), Unforgiven, Gladiator, The Lion King, Jaws, Son Of Frankenstein, The Good, The Bad And The Ugly, and Monsters, Inc.
The Secret Life of Pets 2 Sinatra in Palm Springs: The Place He Called Home (Blu-ray)