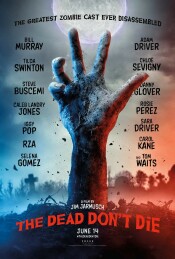 “Something weird is going on.”

If you’re having a bit of zombie fatigue, you’re not alone. From movies to TV shows and video, we’ve had well over a decade of being blasted with the undead. Basically it’s the sub-genre that just won’t die.  I love zombie movies, but I feel audiences could use a bit of a break from them for a little bit and let another monster indulge in the spotlight.  With that being said, when a good one comes along, I’m still going to want to give it a try.  Already this summer we have Black Summer on Netflix that is worth giving a binge, and now hitting the cinemas we have The Dead Don’t Die.  Never in a million years would have guessed that writer and director Jim Jarmusch (Dead Man, Broken Flowers, Stranger Than Paradise) would ever tackle this kind of horror film, but it is a welcome surprise. What’s more enticing about this film is the unique cast that has been put together: some familiar faces from Jarmusch’s work like Bill Murray, Adam Driver, Tilda Swinton, Steve Buscemi, and Tom Waits.

The film takes place in a quiet little town called Centerville, a place so quiet that the biggest problem the police have to worry about is a hermit (Waits) who steals chickens from time to time.  Murray plays Cliff, the chief of police who has stayed on the force a bit longer than he’s needed to, and his partner, Ronnie (Driver) is pretty much the successor to take charge of the department.  We get to spend a lot of time with these two as they drive around town. The conversations are filled with dry humor and can seem to go on longer than needed, but this is very much in tune with other films by Jarmusch.  We get plenty of time to meet the characters around town, from a racist farmer (Buscemi), Danny (Larry Fessenden), who works at the town motel, the town’s new mortician who seems to be a samurai expert (Tilda Swinton), and The RZA, who works for a delivery service.  We meet several other characters, and there are some amusing bits here, but mostly this is also setup for us to get to know who will potentially become members of the undead.

Despite the fact that it may take a while before the zombies do make an appearance, the film follows many of the tropes we’ve become familiar with in the genre.  What is somewhat amusing is that these zombies actually talk…well, at least they are able to say the thing that they were most obsessed with when they were amongst the living.  Our first zombie is a coffee-loving fiend played by Iggy Pop, and from his arrival onward, those who may be fidgeting from all the dialog should start enjoying the film a bit more.

Right from the start this film has a vibe that reminds me of a mix between Night of the Living Dead and Dawn of the Dead, so much so that it even delves into a bit of a social commentary as the film progresses. One thing I’m curious about is if Jarmusch ever considered having the film play in black & white, a style he’s used with several of his previous works.  It simply would have been more fitting to see this in B&W, because in many ways this film feels more of a throwback horror film than a contemporary zombie film we see today.  This isn’t about the gore or crazy unique kills; instead it seems to be just an absurd, self-aware take on the zombie genre.  It’s almost as though Jarmusch is pointing out how many zombie films are flooding the market, and he’s just throwing his camera and talent into the fray to give us his take on the sub-genre.

Chloe Sevigny and Danny Glover also put in some fun performances here.  Really, this film is loaded with great talent, and they all seem to be having a blast with this film.  Now I’m curious how this film is going to play with larger audiences. This is definitely closer to an art house zombie film than the trailers let on, but I still had fun with this one.  For those going in expecting The Walking Dead or even Shaun of the Dead, they are going to be disappointed. Considering zombies have been a topic we’ve seen so much of for years, it’s a little impressive Jarmusch was able to give it a splash of originality, but really this is a film that came like a decade too late.  This is one where I see it garnering a cult following, but it won’t be taking a bite out of the box office.

Brent Lorentson is a horror writer and film critic based out of Tampa, Florida. With a BA in Digital Film, he co-wrote and co-directed Scavenger Hunt. His short stories have appeared in various horror anthologies. In 2019 his short script Fertile Blood will be a part of the anthology horror film Slumber Party. He is currently working on his first novel A Dark and Secret Place set to be released in late 2019. Favorite Films: Taxi Driver, Fight Club, I Saw the Devil, The Wild Bunch, Dawn of the Dead, A Clockwork Orange, Pulp Fiction, Heathers, The Monster Squad, and High Fidelity.
London Kills: Series 1 (Blu-ray) Captain Marvel (UHD Blu-ray) (4K)