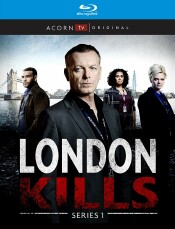 For many years Acorn Media has been the best source for a lot of those classic British drama shows that you’ve seen reviewed here and elsewhere. They’ve brought us some of the best British stars in some landmark work spanning decades of British broadcast. These shows were always something produced by someone else, most notably the BBC itself. So while we can be thankful to Acorn for distributing these shows particularly here in the United States, they haven’t actually been responsible for the actual content. That all changes with the release of London Kills Series 1 from Acorn Media. For the first time the company has created its own straight-to-series production. If this first effort is any indication of what we might expect in the future, I’d say there is great promise here, and while I didn’t find it quite as compelling as favorites like the George Gently series, I saw a ton of potential. There are some very good reasons why I didn’t enjoy this as much as many others, and I’ll get into that in a moment.

Hugo Speer is Detective Inspector David Bradford. He has been on leave because his wife has disappeared. Detective Sergeant Vivian Cole is played by Sharon Small, and she has been running the unit while he has been away. When her squad is called in on a grisly murder scene where a mutilated body is hung from a tree as if to suggest suicide, she fully expects to lead the investigation. But when Bradford shows up at the crime scene, she sees those plans dashed. There’s absolutely some tension and even a bit of hostility between the two. It’s equally obvious that they have some unpleasant history. Cole is also not so popular with her Detective Constable Rob Brady, played by Bailey Patrick. He’s happy to see Bradford’s return. He’s also the squad’s tech geek. Under Brady is Trainee Detective Constable Billie Fitzgerald, played by Tori Allen-Martin, who is appearing in her first show. It’s her first day, and between the bizarre case and the newly arrived Bradford, she’s going to get a running start on her career.

The first observation that I had was how it didn’t have quite the feel of other British dramas I watched over the years. There is a decidedly American feel to the way the procedural plays out. Most of the time is spent at the station, where the team often gathers about a computer screen while Brady gives them a run through the current case. It’s a scene we’ve seen a lot in shows like the NCIS family and others on American television. At first it also appears as though the cases are more standalone until those little plot threads start to add up. We begin to find that each case appears to have some connection with Bradford or his wife. They start quite slow, but within the five episodes of the first series, we get some idea that something more nefarious is going on here.

This is one of the places where the show fell short of the mark for me. I loved the slow build and some of the clever nuance in how the bigger picture is revealed. But in five episodes it leaves with more than your standard cliffhanger. It feels entirely incomplete, and I discovered there’s a huge reason for that. The original production saw the filming of 10 episodes in an 11-week production schedule, but for some reason it was decided to split these episodes into two series, or seasons as we Americans like to call them. I consider it a huge mistake. It’s fine to end on a suspenseful note, but you have to give your audience a bit more meat before you can get away with that. We are just starting to get comfortable with these characters and their relationships to each other when it all comes to a halt. Perhaps this is the rookie mistake of a company’s first series. It’s so glaring for me that I would suggest waiting for both seasons or series to be available before you get invested in the show. At least having them in the can means there absolutely will be a Series 2.

The performances were fine but hadn’t gotten past the awkward stage yet, so I didn’t get a sense of team chemistry quite yet. I will say the big standout performance wasn’t from the show’s regular cast. It was Jennie Jacques, who plays a girl named Amber. She has quite a complicated connection to the cases and a member of the unit, and I’m reluctant to give any of that away because it’s constructed so well in the show that you really need to make the discoveries as you go along. I will say that the actress is wonderful. She gets to play various stages of this “complicated” character, and she transitions from one to another flawlessly enough that it’s easy to get lost in those performances. I love actors who know how to use their eyes and subtle body language, and that’s exactly what this young actress does. I hope we see a lot more of her in the future.

Finally, with a show called London Kills, I would have expected the city of London itself to be an important “character” in the show. Sadly, because so much happens inside or at isolated crime scenes, we don’t really see a lot of London. I get no feeling that the city’s culture or environments play any significant part in the show. Yeah, there’s a nice pan over the city and a couple of fine establishment shots, but so far I really don’t get the title at all. Let’s see if that changes.

Each episode is presented in its original broadcast aspect ratio of 1.78:1. The 1080p image is arrived at with an AVC MPEG-4 codec. The high-definition image presentation is very typical of British television productions. At times there’s a very video feel that goes all the way back to the Tom Baker episodes Of Dr. Who I watched when they were filming the rare exterior. It’s likely due to an increase in frame rate. It helps a little if you disable any “motion” setting on your screens. You shouldn’t have those activated at all. Otherwise you get a documentary feel, and colors are neither vivid nor mute, but rather naturalistic. Black levels are average but don’t really come into play all that often, so you’re not really looking for much of any shadow definition. There are only three episodes per disc, which alleviates any kind of artifact issues.

The DTS-HD Master Audio 5.1 is really there to serve the dialog. This isn’t a high-energy action series, and surrounds are strictly there for some place of reference in the various settings. Nothing to scream about here, but certainly serviceable and as much as you could really want here.

Behind The Scenes: (46:46) This is the only extra, but it’s a rather comprehensive look at the show’s production, and it’s here you’ll learn the details of the multi-season shoot. It includes a table read and the typical cast and crew insights.

This is a first effort, and by that standard I think it hits most of what it needed to hit. The characters are certainly interesting enough that I want to see what happens next. My big complaints going to be the five-episode cutoff. Perhaps it will all make itself clear with those other five episodes. I just don’t want to wait that long. And in this business there is always the uncertainty that a studio won’t offer the next season to critics. I had to come up with a grade because that’s what the format demands. But if I were to be honest, I’d give it an incomplete. From a review standpoint, that unknown factor doesn’t help. You take the good with the bad. “This job isn’t therapy.”

Gino Sassani is a member of the Southeastern Film Critic's Association (SEFCA). He is a film and television critic based in Tampa, Florida. He's also the Senior Editor here at Upcomingdiscs. Gino started reviewing films in the early 1990's as a segment of his local television show Focus. He's an award-winning recording artist for Omega Records. Gino is currently working on his 8th album Merchants & Mercenaries. Gino took over Upcomingdiscs Dec 1, 2008. He works out of a home theater he calls The Reel World. Favorite films: The Godfather, The Godfather Part II, The Body Snatcher (Val Lewton film with Karloff and Lugosi, not the pod people film), Unforgiven, Gladiator, The Lion King, Jaws, Son Of Frankenstein, The Good, The Bad And The Ugly, and Monsters, Inc.
Batman 4 Film Collection (UHD Blu-ray) (4K) Dead Don’t Die