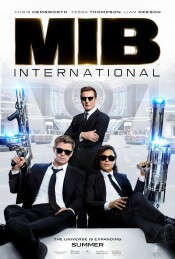 It was the summer of 1997 when audiences were first introduced to the Men in Black.  Will Smith was on the fast track to being a box office star, and Tommy Lee Jones, well, he’s always been awesome to watch on the screen, and he seemed to be having fun in this popcorn blockbuster.  It was no surprise that the film became a hit. As for the sequels that followed, for me they just never could touch the fun energy that the first one had.  I always loved the potential the first film had, as it gave us a world filled with an array of aliens and worlds the Men in Black could venture too, but instead the films that followed played it safe, and really, that’s a shame.  Now over twenty years later and in the fourth installment, we get a soft reboot/sequel that gives us some fresh new faces and new aliens for them to pursue, but is it too little to late, or is this the jolt the franchise needed?

The film opens up and wastes no time introducing us to MIB agents Agent H (Chris Hemsworth) and his superior, Agent High T (Liam Neeson).  Here we see the duo setting up to intercept an alien group known as The Hive.  This opening sequence is a bit lackluster, and then the film oddly does a flashback to 1996, where we meet a young girl named Molly.  We get to see her first interaction with an alien as well as her witnessing the MIB in action (erasing her parents’ memories of their alien experience).  What kind of sucks is this is all the time we spend with Molly as a young girl. Instead the film jumps to present day and shows us Molly (now Tessa Thompson) is now obsessed with finding evidence to prove the existence of aliens as well as becoming a covert agent with the government that specializes in dealing with aliens.  It’s those in-between years where I feel there is a great story that could have been told, but there is no sense in crying over missed opportunities.

It doesn’t take long before Molly manages to infiltrate the New York branch of MIB headquarters, and after being captured uses the moment to turn it into a job interview with Agent O (Emma Thompson).  This film moves pretty quickly. After all, it’s somewhat relying on us to at least loosely remember the first film and how they go about recruiting possible agents. In no time at all we see Molly, now known as Agent M, being whisked away to London for a special mission.  Just how we see Agents M and H becoming partners is kind of silly and hard to believe, but it is easy to accept because of the natural chemistry these two share together.  Really, just seeing Hemsworth and Thompson together on screen is worth checking out.

As they work together, Agent M comes into possession of one of the most powerful weapons in the universe as well as a warning that not only is there a possible mole in the London branch of MIB but that Agent H can’t be trusted.  This is a fun twist in the story, but this is never properly pursued except for certain conversation points over the course of the film.  It takes a while till we meet Riza (Rebecca Ferguson), the only villain who shows any real menace.  Sure, for the previous hour Agents M and H have been pursued by these alien twins who are after the weapon, but they are just poorly-drawn-up characters who serve nothing more than a reason for a couple action scenes but are instantly forgettable.  Riza, though, is something different; she’s an alien arms dealer who also happens to be Agent H’s ex.  I don’t understand why more story wasn’t put here; obviously this is far more interesting than the alien twins.

I feel like this movie didn’t know what it wanted to be, as we’re seeing it at one point as a “who is the mole” storyline jumping to “we have to protect the most dangerous weapon”.  If the film just took itself a little more seriously and focused on the mystery aspect of the mole in the agency, this could have been better. Sadly there are just so many missed opportunities here.

Tessa Thompson is really what saves this movie at times, and it’s her performance here that shows she can carry a film and allow the audience to forgive some of the film’s missteps.  As for Hemsworth, this is a bit frustrating, because, well, he’s basically just playing Thor, but even sillier.  I’m all for an actor having fun with a role, but Agent H is supposed to be this respected agent who could one day take over his branch. The character we see here is more in the same vein as an agent we’d see in the Police Academy films.

Despite some of my complaints, I still had fun with this film, and I liked it more than the second and third installments.  I’m hoping this film will do well, but I’m not sure this will be the success Sony is hoping for. I’d like to see where the franchise and characters can go from here, but they have some stiff competition at the summer box office to contend with first.

Brent Lorentson is a horror writer and film critic based out of Tampa, Florida. With a BA in Digital Film, he co-wrote and co-directed Scavenger Hunt. His short stories have appeared in various horror anthologies. In 2019 his short script Fertile Blood will be a part of the anthology horror film Slumber Party. He is currently working on his first novel A Dark and Secret Place set to be released in late 2019. Favorite Films: Taxi Driver, Fight Club, I Saw the Devil, The Wild Bunch, Dawn of the Dead, A Clockwork Orange, Pulp Fiction, Heathers, The Monster Squad, and High Fidelity.
Shaft (2019) Late Night