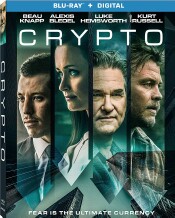 The youth of today don’t appear to understand that movies and pictures used to be taken on a physical medium called film. The problem, of course, was that you didn’t get to see your masterpieces immediately. You had to take the film to be developed. So perhaps that little generational disconnect explains why some filmmakers don’t get that plots, like old film stock, also need to be developed. We live in a world of instant gratification, but the only trouble with instant gratification is that it takes too dang long. The same can be said for film plots. Today there are writers and directors who begin and end that process by throwing in some trending words and concepts from Google, and you have an instant plot that’s sure to bring in an audience. At least that’s what it appears happened with Crypto, directed by John Stalberg, Jr. What amazes me is that it took three writers to do the Google searches. Let’s see… you punch in crypto-currency, Russia, and corporate greed, throw it into your computer word processor, and out comes a script. Let’s call it, I know, Crypto. You have to have a mysterious-sounding one-word title.

Beau Knapp is terribly in over his head playing Marty. Both character and actor have taken on more than they bargained for. Marty is a compliance officer for a huge corporate bank called Omni. He discovers some stuff that ends up not very convenient for the suits and gets sent into exile to his small home town of Elba. He makes the comparison that a certain short French general was once exiled to a place with the same name and came back to conquer France. It’s no surprise that he doesn’t want to go back to Elba. He’s estranged from his stubborn farmer father, played by Kurt Russell, who I’m sure made a mad dash to his own bank to make sure the deposit cleared before he showed up on the set. His brother (Hemsworth) is suffering from PTSD (another Google search?) and is trying to help his father with a failing potato farm. It’s also no surprise that Marty uncovers some “irregularities” at the local Omni branch having to do with an art gallery. He also reconnects with his high school friend Earl Harris, who owns a small liquor store but has a backroom that looks like it could serve as mission control for the next Mars mission. He uses the setup to track and investigate crypto-currency like bitcoin. Wouldn’t you know it? He finds out Omni might be trying to manipulate and dominate the system, and he helps Marty hack into some restricted files.

The investigation continues, but we never really see Marty investigate anything. He asks questions, and then these folks get paid a visit by a Russian hit man who kills them with poison and some really odd lullabies. Because these “witnesses” are killed after simple questions, like Marty, we never actually learn what it is they know. So Marty spends a lot of time brooding while the case pretty much happens around him. He gets his revenge on Omni and a lot of people dead. The film’s not really about crypto-currency. That serves as a kind of McGuffin at best. So what was Crpto really about? I’ve seen the film. Listened to the director and writers talk about the film. I even watched a behind-the-scenes feature, and I still have no idea.

I said that Beau Knapp was in over his head. His acting issues here relate to being consistent. He plays this quiet, almost-savant character with a particular way of speaking. The problem is that Knapp can’t seem to stay in character for more than a few minutes at a time. You’ll find his speech patterns and body language are all over the place. He literally mumbles for most of the film and delivers a performance that is quite painful to watch. Actors like Kurt Russell, Luke Hemsworth, and even Jill Hennessey are obviously in it for the quick shoot and easy paycheck. None of them look comfortable here, and that’s most notably true of Russell, who literally looks annoyed that he’s playing this part.

The film simply meanders through these catchwords and phrases and never has a compelling moment. It’s the kind of film that makes you feel like you’re struggling to get to the end and doubtful that you’ll ever actually make it. It’s “The kind you have to suck on for a little bit or it gets stuck between your teeth. You know what I mean?”

Gino Sassani is a member of the Southeastern Film Critic's Association (SEFCA). He is a film and television critic based in Tampa, Florida. He's also the Senior Editor here at Upcomingdiscs. Gino started reviewing films in the early 1990's as a segment of his local television show Focus. He's an award-winning recording artist for Omega Records. Gino is currently working on his 8th album Merchants & Mercenaries. Gino took over Upcomingdiscs Dec 1, 2008. He works out of a home theater he calls The Reel World. Favorite films: The Godfather, The Godfather Part II, The Body Snatcher (Val Lewton film with Karloff and Lugosi, not the pod people film), Unforgiven, Gladiator, The Lion King, Jaws, Son Of Frankenstein, The Good, The Bad And The Ugly, and Monsters, Inc.
Patrick Melrose (Blu-ray) Annabelle Comes Home