Posted in: Disc Reviews by Brent Lorentson on June 26th, 2019 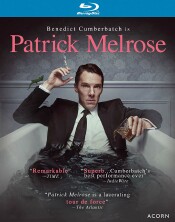 I think it’s safe to say that television has never been better.  With so many channels and streaming services, everyone is trying to get viewers, and to do so they know the quality has to be at a certain level.  The problem is, with so many options, there is no doubt that occasionally a gem is going to get past us.  Patrick Melrose was almost that gem I could have missed if not for a last-minute switch at Upcomingdiscs headquarters. Despite how much quality entertainment is out there, I can say with full confidence that this is not just one of the best limited series of 2018, but this is easily one of the best in the past decade.  It’s only five episodes long, but in those five episodes, from start to finish, it is exceptional television.

Patrick Melrose is an adaptation from the novels by Edward St Aubyn. Though I’ve never read any of the books, after seeing this I eagerly want to read one of these books.  There are five books that he has written about the title character Patrick Melrose (Benedict Cumberbatch), and each episode of the series is based on one of the books.  This immediately makes this show unique, because each episode tells us a unique story that revolves around Patrick from the 1960’s to the early 2000’s.  The show even bounces around in its timeline to tell us this story of an unlikeable drug addict to a family man attempting to redeem himself. It’s a character arc that is so well fleshed out and performed so well by Cumberbatch that I’m surprised to say he manages to outshine all his previous performances.

When we first meet Patrick, it’s 1982, and he’s receiving a phone call that his father, David Melrose (Hugo Weaving), has passed away.  Patrick is a full-blown heroin addict at this point and has to travel from London to New York to claim his father’s body.  This episode is filled with drug abuse, and we see Patrick abuse himself in some hellacious ways as his highs come and go.  If you’ve seen Trainspotting, then you have an idea of what this experience will be like.  Just this episode alone Cumberbatch is clearly throwing himself into this role, and at this point Patrick is a rather loathsome character.

In Episode 2 we are taken to the Melrose vacation home in Southern France. It’s here where we get to meet David Melrose and Eleanor Melrose (Jennifer Jason Leigh).  For those wondering why it is that Patrick has such contempt for his father, this episode reveals a lot, and Weaving does a remarkable job playing such a loathsome character. But there is so much more going on in this episode as we see Eleanor struggle with being a good mother while being under the thumb of David, who wants nothing more than total control over her. The focal point of this episode revolves around a dinner party where a few family friends are getting together for the evening. Here we get to meet David’s friend, Nicholas (Pip Torrens). Basically he’s a toned-down version of David, but still a scumbag.

What seems to be the trend with this show is introducing us to the upper echelon of Europe and revealing how vile they all seem to be while their children suffer the consequences of their actions.  Whether we see the children acting out through drugs or sex, they all seem to resent their families.  Even in Episode 2 when we meet Bridgett (Holliday Grainger), she uses sex to work her way in with the social/wealthy elite, but as the show progresses a bit, we get to see how it changes her for the worse, and she gets the chance to either escape this new way of life that makes her miserable but wealthy, or she can become a good parent and daughter. This is a challenge for her, since she was an outsider who didn’t come from wealth.

Getting back to Patrick, he is also faced with a choice with sobriety, but also what to do with himself and his family’s fortune (though even the fortune becomes a struggle for him to face later).  Episode 3 takes us to 1990 when he’s managed to stay clean, and it’s here where he really opens his eyes to the way of life he was brought into and how much he hates it, and he vows to be nothing like his father.  Oddly enough, it’s through his actions of trying to behave differently from his dear old dad that he manages to be not so different from him after all, and as we see this progress over the next episodes it’s hard to not appreciate how brilliant this character study is.

Jennifer Jason Leigh puts in a tremendous performance here. There is so much going on with this character that Leigh manages to emote so much with simple gestures and expressions.  Seeing the struggle Eleanor has with being a mother and being a wife while she’s lost her identity through alcohol abuse could have come off as over-the-top, but the writing manages to keep things restrained.  Eleanor is a character who is filled with so much depth that it’s just difficult to feel just one way about her, and that’s what makes this feel so honest and impactful.  In many ways it’s the women who are the strength of this show, like Mary (Anna Madeley) whom we see over the course of the series become Patrick’s wife.  This is another well written character that feels genuine as she struggles to deal with Patrick’s outbursts and being a rock for her family. It’s not a stretch to understand how she empathizes with Eleanor.

Along with the great cast and well thought out characters there is the breathtaking cinematography that goes from being frantic and hallucinogenic to long wide shots that let us soak in the beautiful scenery of the French countryside.  Each episode manages to have its own distinct style and look to it while it goes on to fit the show.  From the claustrophobia of when Patrick is coming down from a high, to beautiful camera movements at an upscale party, it’s hard to look away from this show.

Another thing that the show manages to get just right is the makeup used on the characters as we see some of these characters age over the course of thirty years for some.  Everything from the subtle blemishes, to virtually a total morphing for those who have suffered strokes, and others covered in liver spots.  It’s an excellent job at transforming these characters and still allowing them to emote through their expressions.

Considering there were only five books written and all were used for the series, at this time it seems to be up in the air whether we’ll get to see any more of Patrick Melrose and his struggles to conquer addiction and be a family man.  Part of me says, just let it be.  I don’t know how easy it can be to replicate what we get to see, much less improve upon it.  While it may not have gunfights, dragons, or girls fighting demogorgons in the Upsidedown, Patrick Melrose is one of the most intelligent, cleverly written shows that will have you hooked.

Patrick Melrose is presented in the aspect ratio 16:9.  The 1080p image is arrived at with an AVC MPEG-4 codec.  This is one of the best looking shows I’ve gotten to see with a very wide spectrum of styles.  Blues seem to play heavily when we see Patrick going through his drug abuse or dips into drinking.  Though when the show throws us in to gatherings with the social elite the colors are richer; everything gets sharper and warmer.  Then as we get to the French countryside the colors continue to be vibrant, until we see Patrick alone with his father, where the colors seem to go dull.  There are some slight compression issues, but nothing at all distracting, when it’s most obvious is a scene where the room is flooded in a blue filter.  Textures in clothing and in faces are remarkable.

The DTS HD-Master Audio 5.1 track is subtle here but is beautifully used.  One of the most noteworthy moments is in Episode 3 where we have the conversations moving around us.  This is a very dialog-heavy show, and thankfully everything comes through crisp and clear.

Behind the Scenes Featurette: (5 min) Mostly this is set up with quick interviews with cast and crew discussing the project.

Inside there is a small 36-page booklet that has interviews with the cast and crew.

This is a show I can’t recommend enough; give this show a chance. Cumberbatch is showing he’s more than just Doctor Strange or Sherlock Holmes; he’s really one of the best actors working at this moment.  Sure, the material is far from happy fluff that you can catch on standard TV, but it also isn’t smug like certain other shows *cough Downton Abbey*.  I was hooked from the opening minutes and could easily have sat through another five hours of this show.  It’s clever, it’s fast-paced, and it is jam-packed with a lot of emotion.  You really don’t get much better than this.

Brent Lorentson is a horror writer and film critic based out of Tampa, Florida. With a BA in Digital Film, he co-wrote and co-directed Scavenger Hunt. His short stories have appeared in various horror anthologies. In 2019 his short script Fertile Blood will be a part of the anthology horror film Slumber Party. He is currently working on his first novel A Dark and Secret Place set to be released in late 2019. Favorite Films: Taxi Driver, Fight Club, I Saw the Devil, The Wild Bunch, Dawn of the Dead, A Clockwork Orange, Pulp Fiction, Heathers, The Monster Squad, and High Fidelity.
Toy Story 4 Crypto