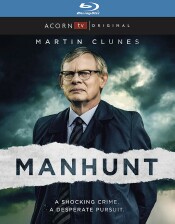 “This drama is based on the true story of a police investigation in Southwest London between 2004-2006. Some names have been changed, and some characters and scenes have been created for dramatic purposes.”

Serial killers have mostly been the stuff of American dramas and unfortunately the American reality. This particular brand of sociopath doesn’t appear to thrive in the confining environments of most countries. Of course, for some it’s that they shy away from the designation, and for others it’s pure denial. But in the period between 2004 and 2006, Great Britain was terrorized by this very kind of human animal. The criminal’s name was Levi Bellfield, and for two years an English task force hunted this killer. The lead investigator was Deputy Chief Inspector Colin Sutton. DCI Sutton ended up writing a bestseller book on the case, and now it has become an ITV series out on Blu-ray from Acorn. It’s called, appropriately enough, Manhunt. It’s a short little series containing only three episodes. A second season, or series as the Brits like to call them, will be airing sometime in 2020. For now this is a chance for the American audiences to discover the case and the series firsthand.

The series begins with the discovery of the body of a French woman named Amelie Delagrange in Twickenham Green. It appears that there may be links to this case found in other cases, and the possibility of a serial killer is quietly considered. Deputy Chief Inspector Sutton (Clunes) is called in to head the task force, which so far is only being tasked with the single murder. Of course, trouble is going to ensue when Sutton wants to investigate the earlier cases. The problem is that one of those cases already has a suspect, and the investigating officers don’t take very kindly to any interference.

While this is a serial killer investigation, that’s not quite the focus of the show. As you might expect, the show focuses on Colin Sutton. The series is based on his book, and he was available to the production team throughout the process. But this isn’t the focus of heroics or extraordinary abilities. What the show does exceptionally well is allow us inside the private life of a detective working such a high-profile and high-pressure case. He can’t help but worry for the safety of his daughter and constantly bothers her to communicate more frequently. His wife Louise (Blakley) works as a profiler of sorts at the metro headquarters. The case causes friction between them on multiple fronts. He wants her to talk about what she knows on the other cases, and she’s been ordered not to do that. He also gets so obsessed with the case that he’s neglecting her. He blows off a family trip to Spain where her brother is getting married to follow up on a last-minute lead. It’s a family that might not survive the case. The series allows us to see not only those big moments, but the script allows us to catch those subtle, more nuanced things that play in their relationship. Many shows of this kind take us on the inside, but few actually capture the realism of those casualties of this kind of a case.

The show is likely one of the most realistic depictions of this kind of a case with the notable exception that they tried to cram so much in just three segments. I get the feeling we missed some very important steps here, and that’s likely going to draw people to Sutton’s book. Not a bad thing for him, but it sometimes makes me feel like I must have missed an entire episode. The material deserved more here, and I hope a second season might help flesh some of this out.

There’s also a downside to being so spot-on realistic. The truth of it all is that police work is painstakingly slow and deliberate. That’s not exactly a good ingredient for a drama television show. There are times that the material is too much of a slow burn. Certainly, it’s what makes it so authentic, but it created a bit of a dilemma for me. It felt too slow at times, but rushed at the same time.

The cast is somewhat mixed. Martin Clunes is likely best known for his comedic work. He does manage to pull off a likable and intense police investigator here. More important, he ends up having quite good chemistry with Claudie Blakley. Together they bring a lot of heart to what could have become a relatively sterile presentation. Many of the other officers do good work in the short and clipped officer performances, but none of them rise to great general notice. No one at work has any real chemistry with Clunes, and a few are downright clunky and awkward. Again, that likely serves the authenticity, but not necessarily the dramatic elements of the series. Celyn Jones plays the killer, and while we don’t ever see him in action as a killer, he has some nice performance moments as a suspect. He’s an awkward character, and Jones gets inside of his head so much that he is the most believable character in the series. I suspect he’ll get more time to develop in the second series.

You get all three episodes on a single disc. The only real extra is a 7-minute interview with Martin Clunes.

The series appeared to be presented as a standalone thing, at least that’s what the ending indicates. You see photos of the actual victims and players. The postscript lends a feeling of finality to it all. But now I hear they’ve got something more to show us. “Let’s see it, then.”

Gino Sassani is a member of the Southeastern Film Critic's Association (SEFCA). He is a film and television critic based in Tampa, Florida. He's also the Senior Editor here at Upcomingdiscs. Gino started reviewing films in the early 1990's as a segment of his local television show Focus. He's an award-winning recording artist for Omega Records. Gino is currently working on his 8th album Merchants & Mercenaries. Gino took over Upcomingdiscs Dec 1, 2008. He works out of a home theater he calls The Reel World. Favorite films: The Godfather, The Godfather Part II, The Body Snatcher (Val Lewton film with Karloff and Lugosi, not the pod people film), Unforgiven, Gladiator, The Lion King, Jaws, Son Of Frankenstein, The Good, The Bad And The Ugly, and Monsters, Inc.
Space: 1999 – The Complete Series (Blu-ray) Alan Jackson – Small Town Southern Man