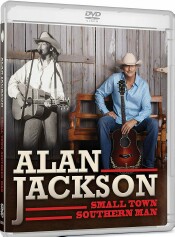 He is heralded as the gold standard of traditional country music. He has released 16 albums, including three greatest hits albums, two Christmas albums, and two gospel albums. He has sold over 80 million records. His accolades include two Grammy awards, 16 CMA (Country Music Association) awards, 17 ACM (Academy of Country Music) awards, and he was inducted in both the Country Music Hall of Fame and Nashville Songwriter Hall of Fame. However, before this disc I had never even heard his name. Don’t get me wrong; I’m not a big country music fan, but I have some familiarity, so I figured I should recognize him. Then I realized that all the country musicians I know pay homage to this man. That alone establishes the mark this man has had on the music genre.

“Alan is the greatest country singer since Merle Haggard.”

I think of this as a docu-concert, as the film opens up at one of his concerts. The concert was intercut with interviews with fellow artists such as Carrie Underwood, and his Dixie Steel band mates singing his praises as well as family members providing insights regarding his humble beginnings. The only boy in a house of five children, there were more children than space; Alan actually slept in the hallway for a period of his life.

You don’t only have to hear about his upbringing from his loved ones, as the film as includes interview archival footage right from the man himself. It was very clear that success didn’t come easily, as he recounts the number of times he faced rejection while pursuing his dream. “Too country for country.” His pursuit of traditional country music sound wasn’t readily accepted, as the genre at the time was more in line with pop. However, with the help of artist like George Strait and Randy Travis, Alan was able to trail-blaze his “middle of the road” style.

Speaking of trail blazing, it is evident that though it took some time for him to get his big break; once Alan got through the door, he never stopped striving to improve his craft and venture into other avenues of the business such as songwriter, where he would find his true niche. Continuing to better himself, executives at his label detail how he embraced the music video format back when it was in its infancy and was involved in the planning of the video and recruiting of directors to film it.

After being treated to an up close and personal depiction of his life, his music may not be my cup of tea, but I have a lot respect for his journey from Newman, GA to the top of country music genre. I must admit he has some catchy tunes; there was one song called “Gone Country” that I found myself humming along to. I’m not saying that I’ve been converted, but I have a better appreciation for this brand of music, that embraces the everyman instead of a putting forth a lavish fantasy that few will ever obtain. His music is easy to relate to despite it being very specific to his life. As one article about him detailed, “He writes what he sees.”

This is a clear-cut tribute video. The timing of it is also good, as Jackson was recently inducted into Nashville Songwriters Hall of Fame. There is quite a bit of detail, as the film covers from birth to the aforementioned honor above. It gets a bit long-winded at times, and some of the childhood details could have been left out, but all in all it gives a good sense of the man who has left a huge mark on country music and still performs to this day. I’m sure fans of Alan Jackson will be more than appreciative of this in-depth look into his life.

Jeremy Butler is a film school graduate of the International Academy of Design and Technology. He is been writing for Upcomingdiscs since 2012; however, movies have played a big part of his life for much longer. Favorite genres include horror, science fiction/fantasy, and comedy. Favorite movies are V for Vendetta, Boondocks Saints, Kiss Kiss Bang Bang, and The Godfather.
Manhunt: Season 1 (Blu-ray) Dead Trigger (Blu-ray)