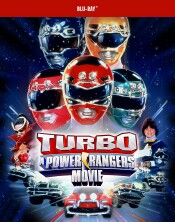 I am a Power Rangers fan. I grew up during the first incarnation of the series and had every one of the action figures with the flipping head to show them masked and unmasked. Hell, I am even a fan of the film that premiered in 2017 so much that I would welcome a sequel, though that prospect seems unlikely with the rising profiles of Naomi Scott, RJ Cyler, and Dacre Montgomery. All that said, Turbo: A Power Rangers Movie is where I get off the bandwagon. Despite featuring some of the original cast members, the story is too convoluted and over-the-top to find enjoyable. Taking place after the events of Powers Rangers’ fourth season, also known as Power Rangers Zeo, Turbo sees Tommy Oliver still in command (i.e. the red ranger) of the last crop of Rangers. While competing in a local charity fight to save the Youth Shelter, Rocky DeSantos takes a fall and is seriously injured, which leads to the discovery of their identities by Justin, a friend of Rocky and frequenter of the Youth Shelter. Meanwhile, a new enemy emerges in the form of Divatox, an intergalactic space pirate who is searching for a key that will allow him to traverse an inter-dimensional gateway in order to marry a Maligore, who has promised riches and immense power in exchange for their union.

This movie served as the segue into the Power Rangers Turbo TV show, as well as Kimberly Ann Hart’s exit from the universe with the exception of her cameo in the 2017 incarnation. Perhaps this is bias on my end, but this film would not have been how I wanted to leave the franchise. The story was too convoluted and ridiculous for me. Now this is obviously the opinions of me as an adult; I’m sure when I was a kid and the movie first premiered back in 1997, I thought it was the greatest thing to come into my young life. Fast forward to my adult self; I can’t digest the silly storyline.

For one, the campiness does not hold up the older you get. It was impossible for me not to laugh as I watched them morph. That used to be my part, but now it borders on the ridiculous. I don’t even know how the actors were able to keep a straight face doing all this. I don’t want to beat up on the film too much as I understand that for its time, it was legit entertainment. I’m just having a difficult time believing that this re-release will appeal to this generation. With all the technological advances they have at their disposal, these children will look at what we used to watch and rip it to shreds, my daughter included. My daughter would take one look at the cheesy acting and ask why she was being punished.

Also, while it was good to see Jason Lee Scott and Kimberly Hart, they pull focus away from a burgeoning cast. Additionally, seeing them go from heroes to hostages diminishes their legacy as Rangers. Granted they are far from helpless, but they are shadows of what they once were. The storyline would have done better to focus on the new crop of characters. Maybe even have one of the new recruits captured instead of the veterans. Or perhaps even the leader, Tommy. Now that would have been interesting.

It isn’t all bad, I suppose; the addition of the new Blue Rangers, also known as Justin, gives the story heart. The journey for this down-on-his-luck kid who gets the opportunity to be part of something bigger than himself is an underdog story, and everyone loves a good underdog story.

There was a time when I looked at this film and loved every second of it, but as an adult all I can see is its flaws. Sagan should have used this as a television movie to launch its series instead of a feature film. I guess it all worked out in the end; Power Rangers is still going strong and reinventing itself every couple of years.

Jeremy Butler is a film school graduate of the International Academy of Design and Technology. He is been writing for Upcomingdiscs since 2012; however, movies have played a big part of his life for much longer. Favorite genres include horror, science fiction/fantasy, and comedy. Favorite movies are V for Vendetta, Boondocks Saints, Kiss Kiss Bang Bang, and The Godfather.
Penguin Highway (Blu-Ray) Dora and the Lost City of Gold