Posted in: Disc Reviews by Michael Durr on August 5th, 2019 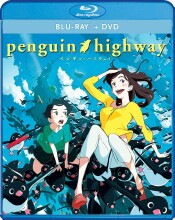 I think most men as they take on the journey from boys to men usually encounter a fascination with an older woman.  Usually it’s nothing more than an infatuation, an impossible ideal that even the woman herself can’t live up to.  But the ideal of what we think of her is important to our growth and vital to exploring our feelings.  In our film, Penguin Highway, we meet a boy who becomes fascinated with an older woman named Onee-San.  However, the mysteries surrounding this lady are numerous and turn this common coming-of-age story into something extraordinary.   Let us take a look.

It is June 29th; the temperature outside is a breezy 25 degrees Celsius (77 degrees Fahrenheit).  Aoyama is in the fourth grade.  He is smart, and he studies hard.  The student has a very bright future ahead of him.  Importantly, Aoyama is high on himself, but he is not conceited, and that’s what makes him great.  On the way to school, he stops by a bunch of children his age who are looking out into the field.  There appears to be a gathering of something, but nobody can make it out.

Aoyama blindly goes across the street, past traffic and into the field.  It’s a large platoon of penguins.  But why are these penguins here?  The penguins are then loaded up for the zoo.  However, one is still loose and proceeds to run through our credits.  At the end of the credits, the penguin disappears into the woods.

Back at the school, all of the students are talking about the penguins.  Aoyama forms an expedition team with his friend Uchida to find the source of the river (which is where we last saw the penguins).  The class bully, Suzuki, teases Aoyama about his notes and upcoming expedition.  We are also introduced to Hamamoto, one of the female students in the class, who is very smart and good at chess.  She is also very inquisitive like Aoyama.

Later, Aoyama has to go to the dentist’s office.  Oddly enough, Suzuki is there waiting as well.  Due to the way Aoyama was bullied by Suzuki, he proceeds to make up a disease on the spot that he calls Stanislaw’s Syndrome.  He then tells Suzuki that all of his teeth will fall out or he will die.  Moments later after Suzuki goes to see the dentist we can hear him crying.  A second after that, Onee-San, the dental assistant, comes out to get after Aoyama.

Onee-San is the classic older woman.  She is beautiful, charming, easy to speak to, and has a couple of wonderful assets.  She gets after Aoyama, not in a yelling way but more a “You shouldn’t have done that, but I’m still going to be nice to you” way.  The two talk about penguins, and it appears that Onee-San also has a mystery of her own that she wants the young boy to solve.  As the research continues, the two mysteries will suddenly fuse together in a way nobody could imagine.

The movie’s central plot is around the penguin highway and Aoyama’s research into why it exists, but also his “relationship” with Onee-San as it blossoms and grows into a wonderful friendship.  Sure, it starts from talking about her “boobs” (the word used in the film), but eventually Aoyama’s admiration goes beyond that part of her, and he realizes his friendship with her is something special indeed.

The mysteries of the film are also genuinely interesting and intriguing.  Once Hamamoto joins the research crew,  the stakes are raised, and this really adds to the film.  The supporting cast of characters also help to give the film some depth and make the situation seem worldly.  But the audience, or at least the male portion, stays for the friendship between Aoyama and Onee-San, and the payoff on an emotional level is very rewarding.

The film is shown in a 2.20:1 widescreen format.  As is the case with most modern animes, there is much care made to provide a beautiful visual presentation.  Characters are well drawn, and the environment around them is serene.  Colors among objects and flesh tones are accurate.  Things such as the forest or the “Ocean” have a lot of depth and detail to boot.  However, you will get an occasional static background in certain places, but the complaints here are few and far between.  Overall (especially during the tense scenes) there is a lot to like visually.

The audio tracks are  DTS HD 5.1 in Japanese and English.  Subtitles are provided but the languages available are based on your audio.  If you pick the Japanese track, you are forced to have English subtitles.  Also, you can’t turn them off.  (They aren’t burned in but can’t be turned off either).  If you pick the English track, you can have English SDH or nothing at all.   Which is really bothersome when it is about the only misstep of the whole audio performance.

On the flip, this is probably the best audio track from an anime I have listened to in a long time.  Dialog is crisp, clear, and easily decipherable among all of the characters.  Interestingly between the two tracks, I found that the voice of Suzuki was downright annoying on the Japanese track but much more palatable in the English track.  By contrast, I much more preferred Onee-San’s voice on the Japanese track as opposed to the English one.  But Onee-San is much more important to the story, so we can guess which way I went.

In addition to the dialog, surrounds are absolutely fantastic.  Everything is perfectly balanced, all of your speakers will get a workout.  I know that sounds a little bit hard to believe for this type of movie, but there are sound effects to the left, right, and to both of the rear speakers.  Sounds of penguins, rain, and even something as simple as somebody preparing dinner are a great experience.

Interview with the Director Hiroyasu Ishida 21:06: First time director on a feature film (dealt with only short films previously) talks about his experience working on the production.  He speaks about his style and his earlier works.  He then goes into various scenes like the Penguin Parade and how the lead male role of Aoyama was actually voiced by a female, Kana Kita.  Hiroyasu finishes up the interview talking about various other characters and the main theme song.

Interview with Tomihiko Morimi  11:51:  The author of the book shares his thoughts on the film and how faithful it is to the novel.  The book spawned out of fantasies he had as a child and he compares himself to the character of Uchida.  Tomihiko also talks about the cast and how the movie was approached to him.

Ishida Past Works Promo Video  2:17:  This shows various clips of Ishida’s short films from 2009 – 2014.  The only problem is I can’t tell which film is which, because they only list them (and some of them in Japanese) at the end.

“Good Night” Promo Video 2:08:  The trailer for the film set to the backdrop of “Good Night”, the main song.

Penguin Highway was nominated for the best animation film at the Japanese Academy Awards as well as the Catalonian International Film Festival for Feature Length Film (Anima’t Award).  Even though it didn’t win either distinction, it is truly a well done film that draws the viewer in with the mystery of the penguins, but you stay for the coming-of-age story between Aoyama and Onee-San.  The two strong leads and a very good supporting cast of characters will delight viewers, and honestly, it would be very interesting to see these investigations spin off into an anime television series.

The video was also very good, and the audio was spectacular minus the subtitle issue I mentioned.  The extras are the only truly weak spot of the disc, but that hopefully won’t distract too many viewers.  As I was watching the movie for the second time (in English) and writing the review, I was finding myself eager to see it again.  Maybe it was audio presentation, maybe it was the mystery, but more than likely it was the smile on my face and thinking back to fonder days of the innocence of this male youth.  Enjoy.

Michael Durr has been reviewing movies for the better part of fifteen years now. He primarily enjoys thrillers, sci-fi, animation and even a little courtroom drama. His favorite films include Escape from New York, the Goonies and anything with Alyssa Milano. When he’s not praising Kurt Russell as the greatest actor of our time or scratching his head over a David Lynch flick, he’s spending time at home in Texas with his lovely wife, Lori and his amazing son. How they put up with him is a mystery, but even Basil Rathbone doesn’t have the time to solve that one.
Body At Brighton Rock (Blu-ray) Turbo: A Power Rangers Movie