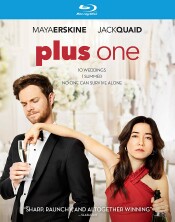 Plus One takes a completely predictable premise and injects some much needed chemistry and comedic timing into it. I mean, come on; based off the synopsis alone we can tell that it is inevitable that our leads’ interactions will eventually turn romantic. I mean, we’ve got Ben, played by Jack Quaid (Meg Ryan and Dennis Quaid’s son, also the star of Amazon Prime’s latest series, The Boys), the last of his single friends who has romanticized the idea of the perfect companion. Then there is Alice, played by Maya Erskine (PEN15), a jaded woman following a breakup. These two single friends decided to team together and act as each other’s plus ones to all their friends’ weddings. Come on, it doesn’t take a seasoned critic to see the romance coming. This ideal is pretty much standard operating procedure in romantic comedies with hit-or-miss potential. Well, if it hadn’t been for the chemistry between Quaid and Erskine, the comedic timing of the supporting cast, and Erskine’s individual performance, this movie wouldn’t have been a hit.

As I mentioned earlier, the premise of the film was very predictable. We all knew where the story was heading, so instead of focusing on where we were heading, we need to focus on the journey. This is where Quaid and Erskine’s chemistry was of the most importance. When we meet them, Alice is just Ben’s annoying friend looking to drown her sorrows in the open bar, which she then proceeds to do. Naturally she is the one to suggest the arrangement, and of course Ben is hesitant to the idea, but we all know that he is going to go along with it eventually. The two even act as each other’s wingmen to varying success early on. I must admit that I prefer Alice’s method of throwing Ben into the deep end to Ben’s subtlety. All that pretext aside, we all know that it is only a matter of time. What I couldn’t believe is where their relationship began. I laughed so hard at the idea of getting it on in this insane locale. I literally couldn’t imagine a less romantic setting if I tried. I give the film major points for the out-of-box thinking in this regard.

The pairing of these characters from a superficial standpoint is unorthodox. If I had to visualize two people who would never be a couple, these two would be a chose representation of what I imagined. They just didn’t have that look in the beginning, but as the story progress, like Ben said, they actually do look good together. Their dynamic breaks down barriers, and their banter is what makes for quality viewing. Which leads me to Erskine’s individual performance. Not to take anything away from Quaid, but given his pedigree, I expected him to bring his A game. Erskine, on the other hand, I knew nothing about. I was familiar with the name of the show she was part of, but never seen her performance. She was hilarious from her opening line, interrupting Ben as he practiced his speech, though I did have concerns about how long she would maintain the jaded dumped persona. Fortunately it wasn’t long, as she transition into ball-busting her counterpart and helping him to realize the impossibility of his romantic ideals.

She wasn’t all giggles, though, as she showed considerable emotional range during the film’s third act. Not to go into too much detail, but when confronted with the reality of their situation, she digs down deep and shows herself to be able of great comedic timing and emotional depth. It was quite nearly enough to make me want to watch couple episodes of PEN15.

Our two leads weren’t the only ones providing laughs. There were two characters, Nick and Brett, who were a couple as well as each other’s co-best-men who were absolute scene-stealers. Their roles were little more than a cameo performance, but they made the most of their time. Whether it was calling out the leads regarding their denial of the ever-changing relationship or their co-best-man speech, they dominated. I wished that they’d played a larger role in the film. As crazy as it sounds, they were my favorite couple of the film.

Plus One had a fine line to walk between being a success or being a cliché, and it managed to traverse that line like an expert gymnast. Much to my surprise, I found it to be an entertaining experience, with enough romantic sentiment to satisfy my wife and enough raunch to keep me from dreading the experience. Fellas, this will be one romantic film that you won’t completely hate.

Jeremy Butler is a film school graduate of the International Academy of Design and Technology. He is been writing for Upcomingdiscs since 2012; however, movies have played a big part of his life for much longer. Favorite genres include horror, science fiction/fantasy, and comedy. Favorite movies are V for Vendetta, Boondocks Saints, Kiss Kiss Bang Bang, and The Godfather.
Batman: Hush (UHD Blu-ray) (4K) Major League (Blu-Ray)