Posted in: Disc Reviews by Michael Durr on August 13th, 2019

It is hard to not like a well done baseball movie.  From Bad News Bears to The Natural to The Pride of the Yankees, there have been a slew of movies on America’s favorite pastime.  Today’s review of Major League in its thirty years after release is another fine baseball movie which does well with great characters and easy to root for story-line of the plucky underdogs.  Let us take a look at this re-issue of a fine blu-ray with a snazzy new cover and see what it has going for it. 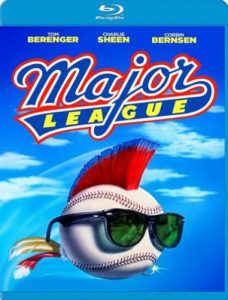 We open with various shots of the city of Cleveland.  At one time, they were the 1948 Major League Baseball World Champions.  However, for every year afterwards they were a bigger and bigger disappointment to the sport and to the town they called home.  Now some forty years after that great year, we learn that the Indians owner has died.  He is survived by his wife (a former Vegas showgirl), Rachel Phelps (played by Margaret Whitton) who has inherited the team and wants to make a few changes.

On the first day of spring training she brings all of her front office in for a meeting.  She hands them a list of players she wishes to invite to training camp.  The guys look over the list with a confusing glance and tell her that they don’t even know who half of these players are.  Heck, one of them is even dead.  We’ll cross that one off.  The other half of the players aren’t good and the Cleveland fans aren’t all that hopeful about the team’s outlook.

Ms. Phelps names the team manager as Lou Brown (played by James Gammon) who only has experience in the minors as the manager of the Toledo Mud Hens of the International League.  But as she talks to her general manager Charlie (played by Charles Cyphers), Rachel reveals her master plan.  She has no interest in the Cleveland Indians winning.  Actually, she instead wants them to lose so that their attendance falls below a level of 800,000 and then she can relocate the team to Miami where she has been promised everything in return.

But enough with the front office talk, we should probably explore the prospects for this team.  They include:

With all of these characters the team isn’t positive that it will lead to a successful season, but it surely will lead to a funny and interesting one.  The movie really is a casting dream with so many characters that really play off each other well but feel like a single unit at the same time.  In addition to the ballplayers, there are many other wonderful elements that make the movie what it is.

Bob Uecker plays Harry Doyle and is probably still my favorite movie sports announcer of all time.  There is actually a really good romance sub-plot between the character of Jake Taylor and Lynn Weslin (played by Rene Russo) that almost everybody forgets about.  Ricky Vaughn might be the star but Jake Taylor is the core of the film.  Also as I get older, I start to appreciate Eddie Harris, mostly because he emulated so well some of my favorite pitchers growing up like Phil Niekro or Gaylord Perry.  That’s not even scratching the surface of all of the famous characters.

I also appreciated the genuine humor of the film as many moments are laugh out loud funny even in repeated viewings.  It wasn’t from all one character either as every major cast member (and many minor ones) had lines that you find yourself repeating many years later.  When many movies these days only pretend to have humor, this one has it in spades.

The strength of the story and bringing all of these stars under one roof in a believable fashion should be credited to the director and writer of the film, David Ward.  It’s a rare accomplishment and something that unfortunately could not be replicated on the following two sequels.  (Ward did direct the first sequel but did not write it).  They also picked a perfect team when dealing with the Cleveland Indians, a team that I often identify with since I’m a lifelong Phillies fan in terms of losing and not always performing up to the level you hope.

The film is presented in 1.78:1 widescreen and is cropped a bit from its original presentation of 1.85.  It doesn’t help things that the print seems a bit dirty (I know Milwaukee where the movie was shot isn’t exactly clean, but it’s not that hazy) and does not have the detail that it should.  But the scan is from over 10 years ago and was more than likely a product of its time.  It’s certainly watchable and the color is fine in most of the movie but at this point it is screaming for a truly new release with a quality presentation.

Audio provided in this film include English 5.1 Dolby True HD, French Dolby Digital Mono and Spanish Dolby Digital Mono tracks.  In addition, we have English, English SDH, French and Spanish subtitles to boot.  The audio fares better than the video as dialog is crisp and clear and we get to enjoy the baseball “sounds” to which were are accustomed to.  Of course, the film had the benefit of an actual stadium environment and supposedly at one point had 25,000 people in the stands cheering for all of the action going on.

I will say that it is not quite as strong as it should be.  When it came to the clubhouse or scenes separated from the diamond it came off as a bit anemic.  Most of those scenes didn’t feel as lively and the audio suffered from it.  The movie’s audio track certainly works but in the end it only feels a bit above average.

Commentary by Writer/Director David S Ward and Producer Chris Chesser : A well spirited commentary that has loads of information as long as you don’t mind the audio issues with Ward’s voice.  He talks about his hometown of Cleveland quite candidly but also reminds the audience that film was mostly shot in Milwaukee.  Most of the conversation between Ward and Chesser is about all of the camera tricks they used.  Like Wesley Snipes really isn’t that fast or Tom’s knees really were hurting for most of the picture.  Or how people remember Ricky Vaughn as a reliever and not a starter which is what he does for 90% of the picture.  Or also how a certain picture on the wall really isn’t Ryan like the coach calls out but instead Sandy Koufax (which I actually spotted a long time ago).  It should be known that the Jobu Cerrano uses in his locker is still missing to this date.  Lots of good trivia bits.

My Kinda Team: Making Major League 23:10:  All of these extras (including the commentary) were originally included on the Wild Thing edition which was first made in 2009 I believe.  They are also cropped all the way around which makes for a difficult watch on Widescreen tv’s.  That aside, this includes the various stars of the movie talking about their experience some 20 years later.  It does not include Wesley Snipes (except in archival clips) because in 2009, he was right in the middle of his tax evasion issues.  In addition to the usual making of scenes with everybody giving high fives all around, we do get to listen to how Steve Yeager worked with the stars to make the baseball seem so realistic.  Also they talk about the trailer which has the second most favorite line of the movie (which never made the actual movie) but unfortunately don’t include the whole trailer for us to appreciate.

A Major League Look at Major League 14:27:  This has various baseball stars like Jason Michaels, Aaron Boone and Grady Sizemore joining us with their thoughts on the movie and how the movie has shaped the sport in the years to follow.  I mentioned it in the commentary notes but it is interesting how people refer to Vaughn as a reliever and not a starter which he was for most of the movie.

Bob Uecker: Just a Bit Outside 12:43:  The Ueck joins us here with a wonderful spirited interview of his broadcasting work (with the Milwaukee Brewers) and how that fit so neatly into his performance as Harry Doyle.  The major treat of this extra is the extended takes which made me laugh out loud on more than one occasion.  If only regular baseball announcers were allowed this kind of freedom (it would certainly make for a more entertaining broadcast).

Alternate Ending w/Filmmaker Introduction 4:18:  This ending is talked about quite a bit in the commentary so I won’t spoil it here.  To me, it would have worked if they dropped little hints throughout the movie that this might be the case.  But the motivations just don’t work as well with the alternate ending left in and the rest of the picture the way it is.

A Tour of Cerrano’s Locker 1:36: Dennis Haysbert joins us for this one in Cerrano’s character as he goes over the various items of the very ornate locker.

Photo Gallery:  Use left or right to cycle through the pictures.   I’m not a fan of this method, the slideshow idea works much better as the left or right button doesn’t always work correctly on all remotes.

This is a very important year for Major League as I have mentioned.  First, it is the thirtieth anniversary of the original feature and two additional blu-rays for the sequel and third films are planned for late September of this year (to be put out by Sony).  The film remains a sport classic as it uses the plucky underdog tale to tell the story of a team destined to lose that finds a way to win.  It’s cast of characters and rich storytelling cements the film’s status of one of the top 5 baseball movies of all time in my opinion.

However, the re-release of the blu-ray is a bit confusing.  It doesn’t have a wide release date and the only thing new about it is the cover (which is certainly more aesthetically pleasing).  The video is still cropped to 1.78 and the video presentation desperately needs a new scan.  The extras are plentiful but aren’t quite good as can be.  It’s just a whole bucket of recycling and frustration for Major League fans everywhere.  The recommendation is simple.  If you love the movie and don’t own it in blu-ray, grab it immediately as you probably can have it for a $10 spot.  But for everybody else, this release is indeed “Just a bit outside.”  Enjoy.

Michael Durr has been reviewing movies for the better part of fifteen years now. He primarily enjoys thrillers, sci-fi, animation and even a little courtroom drama. His favorite films include Escape from New York, the Goonies and anything with Alyssa Milano. When he’s not praising Kurt Russell as the greatest actor of our time or scratching his head over a David Lynch flick, he’s spending time at home in Texas with his lovely wife, Lori and his amazing son. How they put up with him is a mystery, but even Basil Rathbone doesn’t have the time to solve that one.
Plus One (Blu-ray) Pokemon Detective Pikachu (UHD Blu-ray) (4K)