Posted in: No Huddle by Brent Lorentson on August 20th, 2019 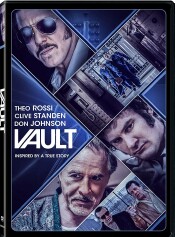 In 1975 a group of guys thought it was a good idea to steal $30 million from the mob. Vault just happens to be the “Hollywood” version of how that heist went down.  This is the kind of story I’m surprised has taken so long to make it to the big screen. While I’m not familiar with the facts on the heist and how it went down, something tells me there we plenty of liberties taken with this film.  Here’s the thing, though; whether the whole story was fiction or a true story, it’s a good idea and should have resulted in a fun heist film.  I’m impressed by how this film took such a good idea and turned it into the snooze-fest that we get here.  Despite having Chazz Palminteri, Don Johnson, and Vincent Pastore making appearances and a running time of 99 minutes, I can’t understand how this manages to feel like an over-bloated missed opportunity.

The film opens up with Deuce (Theo Rossi) and Chucky (Clive Standen) prepping to rob a pawn shop and then arguing in the car about wearing ski masks, Deuce seems to think no one will be able to ID them; Chucky is nervous about cameras and a variety of things going wrong.  The robbery is a mess, but somehow these knuckleheads manage to get away with it. Deuce in the process of the robbery decides to take this moment to flirt with a cashier, and later on when she’s walking home, Deuce pulls up and offers to take her to his house to meet the family and have dinner.  Yeah, we’re talking about a guy who really is that stupid, but we’re supposed to believe he and members of his family are successful thieves.  Seeing Deuce and Chucky working together and how nothing seems to work out for them is filmed as though maybe these guys just have bad luck.  It’s this kind of decision making where the director Tom DiNucci just doesn’t seem to know what he’s doing here.  He treats his heroes like a couple of tough guys trying to make the right moves, when really it’s like watching a two-man take on The Three Stooges.

It gets worse when we see them in prison and we see them attempt to make connections to Gerry (Don Johnson), who is on the lookout for guys to help pull off a heist once they get out of prison.  Obviously Gerry is playing these guys, but the film would rather steer in another direction.  Really, this story is a mess, where the dialog is about as generic as any straight-to-video gangster film from the 90’s.  All I could think of while watching this is how great of an idea this was and how I wish the Coen brothers were helming this.

The one saving grace is that the film is actually shot well.  If not for the camera work, I’m not sure I could have even finished this film.  The music was another nice touch, but it’s all really a distraction from what we are watching.  It’s silly watching Chazz Palminteri trying to be intimidating when he kills a mouse trying to make a point to Gerry, expressing that because Gerry is French he’ll never be a made guy.  I’ve seen A Bronx Tale. I know Palminteri can play a great gangster, but the material he has to work with here doesn’t offer up anything that resembles menacing.  Then there are the lazy moments where we see members of the heist crew are being killed off because of their involvement.  Despite looking as though they are visually ripping off films like Goodfellas…Casino…Carlito’s Way…these hits just lack anything that resembles a dramatic punch.  We don’t feel the threat that is posed against Deuce or Chucky; really, it’s a miracle they survived past the opening act of the film.

Then there is the relationship between Deuce and Karyn (Samira Wiley), the woman Deuce meets at the robbery at the pawn shop.  There is some nice chemistry between these two, but it’s hard to root for this couple, because obviously Deuce is no good for Karyn.  Why she even bothers to get in the car with him, much less have dinner with him and not turn him over to the police, is something I wish we got more of.  Simply having her as a woman who loves this character just isn’t believable here, because we see nothing that validates why she would bother to try so hard for him.

I wanted to like this film. I love heist films, and I’m a fan of some of the talent involved here, but Vault is simply a mess.  Hollywood seems to be stuck in a rut with only wanting to remake films. Please immediately remake this film, because the heist is great material for a film.  Hopefully for those involved the film can bounce back from the mistakes made here, but we’ll see what happens.

Brent Lorentson is a horror writer and film critic based out of Tampa, Florida. With a BA in Digital Film, he co-wrote and co-directed Scavenger Hunt. His short stories have appeared in various horror anthologies. In 2019 his short script Fertile Blood will be a part of the anthology horror film Slumber Party. He is currently working on his first novel A Dark and Secret Place set to be released in late 2019. Favorite Films: Taxi Driver, Fight Club, I Saw the Devil, The Wild Bunch, Dawn of the Dead, A Clockwork Orange, Pulp Fiction, Heathers, The Monster Squad, and High Fidelity.
Where’d You Go, Bernadette I Love Lucy: Colorized Collection